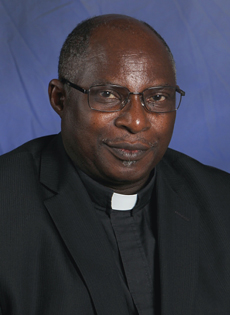 Born Jan. 20, 1954, in Burundi, Africa, Father Biriruka entered the seminary of Bujumbura in 1974 and was ordained July 11, 1981, for the Diocese of Ngozi, Burundi. He obtained a degree in theology from the Urbaniana Pontifical University in Rome in 1985 and a licentiate in moral theology from St. Patrickâs College in Maynooth, Ireland, in 1991. He speaks Kirundi, his native tongue, French (one of Burundiâs official languages), English, Spanish, a little Swahili, and is learning Italian. He found refuge in the United States in 1995 after being blacklisted in his homeland for trying to stop the genocide between Tutsi and Hutu. He has served at Our Lady Queen of Heaven in North Lauderdale, Immaculate Conception in Hialeah, St. Maximilian Kolbe in Pembroke Pines, St. Kevin in Miami, and Epiphany in South Miami before being named pastor of Blessed John XXIII in June 2008.

âMy aunt was instrumental. She spoke to me about it quite a bit. She must have seen something in me. There was also a missionary who after hearing my confession asked me if I would ever consider the priesthood.â

Persons most surprised by his vocation:

âNo one. â¦ My mother may have tried to tell me to consider a career in business to help support the family. My father died in 1973, only a year before I entered the seminary. My mother was left caring for my four older sisters and two younger brothers.â

âThey could have done more to teach us how to run a parish, deal with the finances. I had to learn a lot on my own. Also, they did not prepare us enough on how to deal with social situations. In my case, in Burundi we never discussed in the seminary the problems of the country and how to deal with them as a priest.â

âEither a businessman or a teacher. I felt a strong calling to teach during my high school years until my call to the priesthood became too strong to ignore.â

"Celibacy is difficult but beautiful."

âCelibacy is difficult but beautiful. Obedience is also a challenge. As priests we pledge our obedience to our bishop. In Africa it was challenging to be obedient because situations change so often.â

âHe would love God very deeply, love his people. â¦ In loving your people you must live their joys and sufferings. You must be part of it. A good priest must also be well educated and know and teach the faith.â

âPriests should avoid being put on pedestals. We should be brothers among brothers and sisters. If people saw us that way then maybe they would have a better understanding of the priesthood and be willing to pray more for vocations and their priests.â 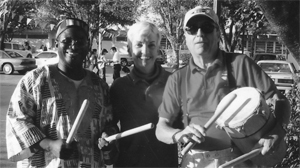 Dressed in traditional African garb, Father Biriruka poses with former parishioners during an event at St. Kevin Parish a few years ago.

âI donât really watch movies, but I would like anything that has to do with Padre Pio or Blessed John XXIII. Occasionally I enjoy a good martial arts movie â¦ as long as it isnât too violent.â

âI like the news. I watch CNN or BBC. I enjoy hearing about politics and then looking at it from the point of view of theology.â

âJohn Paul II because of how he loved the people, how he taught us, how he dealt with problems and how he opened the doors of Jesus to the world.â

âIn my country, there have been horrible massacres and genocides as in neighboring Rwanda. My greatest disappointment has been not being able to stop them. I have tried. I have written letters, made phone calls to so many people both in the United States government and abroad and yet nothing has happened to stop these senseless killings.â

âServing the people of God in both good and bad times.â

âI was able to successfully build this church (Blessed John XXIII in Miramar) and I think I have also earned partial credit, at least, for stopping the persecution of the Church in Burundi. I did that by speaking the truth, being vocal and writing letters.â

âI donât have fears; I consider them adventures.â

âI have had struggles but I have no regrets.â