You must be priests for this time and place

I believe this Mass of the Holy Spirit to open this academic year was scheduled for early September. Then came Hurricane Dorian – well, it didn’t come here. But you all scattered – like scared rabbits. (Just kidding.) Another reason, of course, was the unexpected delay in finishing construction of the new refectory – but when is any delay in construction “unexpected”?

But, as they say, “every cloud has a silver lining.” Today, we can have our Mass to officially open the academic year and we can do so with the assistance of the bishops of Florida whose commitment to this college seminary is well appreciated by all. 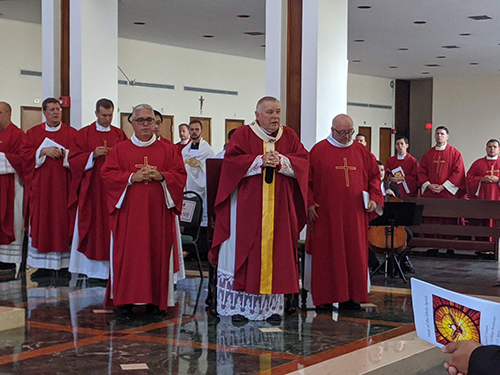 Archbishop Thomas Wenski, joined by all of Florida's bishops, blessed the new refectory and audio visual hall at St. John Vianney College Seminary Oct. 17, 2019, after celebrating a Mass of the Holy Spirit with the seminarians, seminary staff and friends. The seminary is marking the 60th anniversary of its foundation in 2019.

We invoke the Holy Spirit so that guided by that same Spirit, the faculty and students may be truly wise and ever rejoice in His consolation.It is the gift of the Holy Spirit that makes us fit for mission and strengthens our witness. Here, at a seminary which wishes to form young men as priests for the Third Millennium, to work in the diverse cultural and social reality that is our nation and our state. As a seminary community, you must seek the guidance of the Holy Spirit in the words of St. John Paul II in Pastores dabo vobis, “in order to discover the tendencies of contemporary society, recognize the deepest spiritual needs, determine the most important concrete tasks and the pastoral methods to adopt, and thus respond adequately to human expectations." Veni Sancte Spiritus! Come Holy Spirit!

We wear red vestments to symbolize the fire of the Holy Spirit; but, also today, the universal Church recalls the martyrdom of St. Ignatius of Antioch. Ignatius, a bishop in the early Church, was fed to the lions because of his faith, his Catholic faith. His courage in the face of persecution should inspire us – and his witness is still valid for us today – for the Church has faced persecution, of one kind or another, in every age. Cardinal Newman, who was canonized by Pope Francis this past Sunday, said once in speaking of the Church: “She fights and she suffers, in proportion as she plays her part well; and if she is without suffering, it is because she is slumbering. Her doctrines and precepts never can be palatable to the world; and if the world does not persecute, it is because she does not preach.”

Ignatius once wrote: “We recognize a tree by its fruit, and we ought to be able to recognize a Christian by his action. The fruit of faith should be evident in our lives, for being a Christian is more than making sound professions of faith. It should reveal itself in practical and visible ways. Indeed, it is better to keep quiet about our beliefs, and live them out, than to talk eloquently about what we believe, but fail to live by it.” Or, as he also said, more succinctly: “Do not have Jesus Christ on your lips but the world in your hearts.”

As men being prepared to be priests for the 21st century, you will be sent to serve people who live in an increasingly secularized culture where for many God no longer matters; and, as secularism changes the way people think and how they perceive reality, an act of faith is seemingly more tenuous. While we sometimes claim that some 70 million people in America today are Catholic, we know that most of them are not at Mass every Sunday; and the pollsters tell us that the next largest religious demographic in America, far exceeding the numbers of any other denomination, is made of those who would call themselves former Catholics. Often, unlike those first Christians who announced Jesus Christ to people who had never heard of him, today – and this is the task of the new evangelization – we must announce Jesus Christ, not to people who never heard of Jesus Christ and his Church, but to people who think they have – and what they think they know does not draw them closer either to Christ or to the Church. As so today it is not unusual to find people who define themselves as spiritual but not religious; and it is increasingly common to find people who claim to be believers but who do not belong to any church; and to find in our churches those who claim to belong but do not believe.

These are the people to whom you will be sent as priests. To those who think religion is about a bunch of rules and regulations, you will have to present to them the Gospel message, not as a bunch of “noes” but as a great “yes”, a yes given not to an idea or an ideology but to an event, a person, namely Jesus Christ.

That’s what seminary formation is about. That is what this seminary, St. John Vianney, is about – to equip you to be priests for this time and place. Your formation is built, as you will continue to hear over the years, on four pillars: the human, the academic, the spiritual and the pastoral. Each is important; but especially in these early years of your formation, the human is particularly important. You will be challenged to grow in maturity so that your personalities are molded in such ways that they become a bridge and not an obstacle for others in meeting Christ.

And so, at this Mass, at the beginning of a new academic year, we ask for you the gift of the Holy Spirit who alone makes us fit for mission and strengthens our witness. To this end, this seminary community must be a place where the faith in its fullness and authenticity is professed, celebrated, lived and prayed so that Jesus Christ is on your lips but also in your hearts. 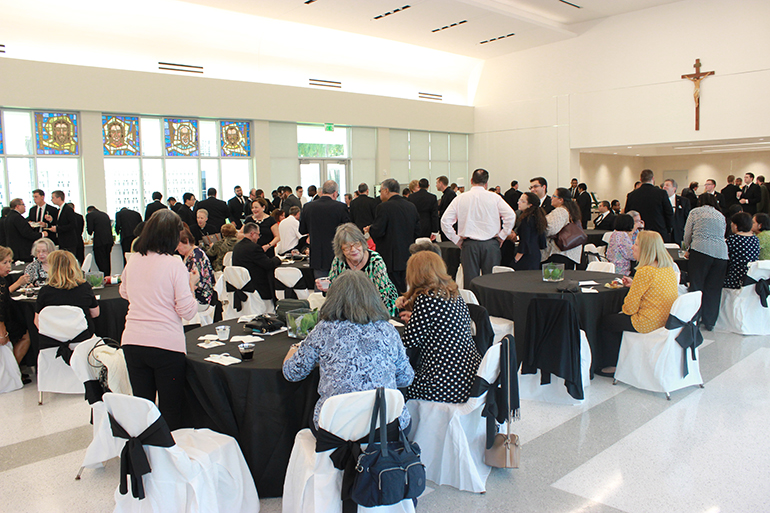 View of the new refectory and guests enjoying the reception that followed the blessing. The seminary is marking the 60th anniversary of its foundation this year.