Emilio Hector Rodriguez pauses between two of his paintings - "The Presentation in the Temple," left, and "The Boy Jesus in the Temple" - during the opening of his exhibit at St. Thomas University. The show, "And the Word Became Flesh," runs through Jan. 10.

"The Annunciation," acrylic and pencil on canvas.

"The Lord's Prayer," acrylic and pastel pencil on canvas.

"The Beatitudes 5:7," acrylic and pencil on canvas.

MIAMI GARDENS | Penciled ovals and blobs of color: Can they convey spiritual truths?

Yes, according to those who have seen Emilio Hector Rodriguez's paintings, here and overseas. To that audience, add St. Thomas University, the venue for his new exhibit, "And the Word Became Flesh."

The 18 canvases, of pencil and acrylic, distill the story of Jesus to basic shapes, with the aim of engaging emotions and imagination, according to the Cuban-born artist. He believes he's doing God's work — or perhaps, God is doing it through him.

Many already have been blessed by his work, judging by his resumé — art shows on four continents, and public collections in several museums.

A total of 58 people attended the opening, at STU's Archbishop John C. Favalora Archive and Museum. The opening included admiring words from curator Isabel Medina, not only for the bright colors and "subtle blendings," but for a "new perspective" to religious art. 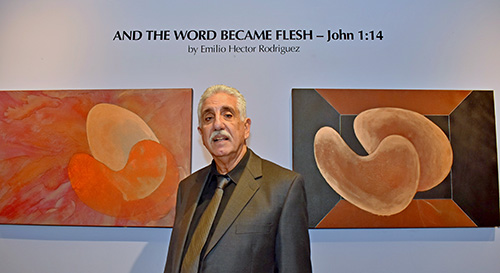 Emilio Hector Rodriguez pauses between two of his paintings -- "The Presentation in the Temple," left, and "The Boy Jesus in the Temple" -- during the opening of his exhibit at St. Thomas University. The show, "And the Word Became Flesh," runs through Jan. 10.

"This is delightful," Medina said. "He's a religious artist who happens to do abstract. We're used to people who visualize something and then try to do it realistically. He dares to present something different. He combines colors and shapes to get the same kind of effect that he has."

Emphasizing the link of art and spirituality at the opening was Father Julio Fernandez of St. Kevin Church, west Kendall, where Rodriguez worships.

Father Fernandez, parochial vicar at St. Kevin, explained further during an interview. "We talk about the essence of all beings in terms of unity, truth and good. But we often forget beauty — the uniqueness of each being. [Rodriguez] shows us, in a beautiful way, his expression of the faith. You go beyond forms and shapes to the experience."

The title of the exhibit, set to run through Jan. 10, is drawn from John 1:14: "And the Word became flesh and made his dwelling among us, and we saw his glory, the glory as of the Father's only Son, full of grace and truth."

Rodriguez's show then breaks the theme into several sub-units: events from the life of Christ, the "Beatitude" quotes from his Sermon on the Mount, even a couple of canvases from Genesis.

All three sections are meant to convey how God manifests himself, Rodriguez said. "Genesis shows the first time we hear the Word of God. And the Beatitudes tell the Word of God for our salvation."

To the untrained eye, though, many of the pictures look like ovals or kidney beans on a flat-colored canvas, outlined in pencil and filled in with acrylic paint. Some are mostly acrylic, resembling green leaves, bluish microbes or red blood cells. 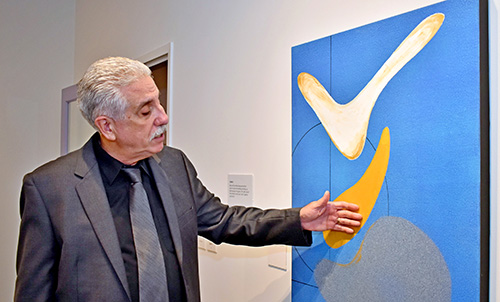 At least until Rodriguez stepped in with some guidance. He gestured toward his painting "The Annunciation." He said the white "V" at the top represents the Holy Spirit, bestowing the Son of God as a yellow teardrop to the Earth, rendered as a large, gray comma at the bottom of the picture.

In a similar way, "The Baptism of Jesus" has a dark blue shape partly surrounded by a green form and overshadowed by a whitish object. The dark blue object is meant to represent "Jesus in humility," Rodriguez said.

The simple objects, no more than three to a picture, illustrate episodes like the Lord's Prayer, the Last Supper, and Jesus' conversation with the Samaritan woman. They don’t always have to be obvious, Rodriguez, said. "It's not what you understand, it's what you feel."

From the series on the life of Christ, the pictures take a sharp shift in style. The colors turn both brighter and deeper, with shading meant to suggest dimension. Dominant shades alternate among deep blues to fresh greens to blood red.

For those pictures, he used a different technique. Laying them flat, he first wet the canvas, then dropped blobs of paint and let them spread. He then added a few marks.

How did he know what to add? He smiled. "I don't know. Sometimes you see a picture needs something."

"Some of it has vibrant colors and organic forms," said Tapia, whose blog is called Art.Seen.365. "They make you think of life and nature, even in their elemental forms."

Rodriguez showed early aptitude for art. Born in Sancti Spíritus, Cuba, he moved with his family to Havana when he was 3. As a young child, he began drawing and painting, as well as visiting museums. He took up oil and tempera at 12. 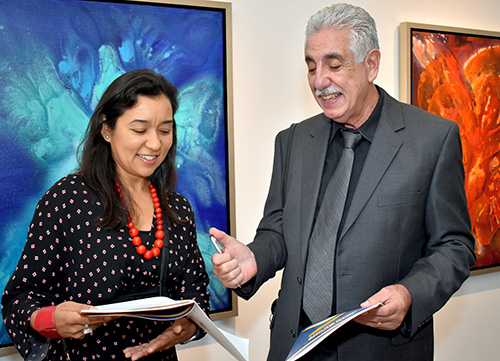 Rodriguez continued his artworks but studied mathematics and computer science at the University of Havana, earning a degree in 1976. He left Cuba in 1981, first for Paris, then Miami.

While working with Miami-Dade as a computer analyst, he continued his art, flourishing with the guidance of Cuban-American painters. He branched into abstract art in 2007.

Why that style? Because it allows him greatest freedom of expression, he said. "I do what my soul tells me to do. Not what someone else tells me."

In 2010, Rodriguez gathered a group of like-minded abstract artists that became the 7 Plus One Project. The group has presented its works around South Florida as well as Dubai, and has lately gotten invitations to Brazil, Panama and Mexico.

His own artworks have gone international, both individually and as part of group exhibitions. The sites have been as far flung as Seoul, Lima, Paris, Madrid and Buenos Aires. He's also done shows in New York, Oregon, Nebraska, Connecticut and California, as well as around South Florida.

He has been a frequent guest at St. Thomas University. In 2017, he was one of four Latino artists in an STU exhibit, "Contemplations." The 25 pictures were meant to show "the incredible artworks being made in Miami," according to Medina, who curated that show as well.

But Rodriguez said he doesn't want the viewers' experience to end at the door of an art gallery. After seeing his artworks, he hopes they’ll go home and read the biblical texts that spawned them.

"I hope it inspires someone to pick up a copy of the Gospel," he said. "They’ll be richly blessed."