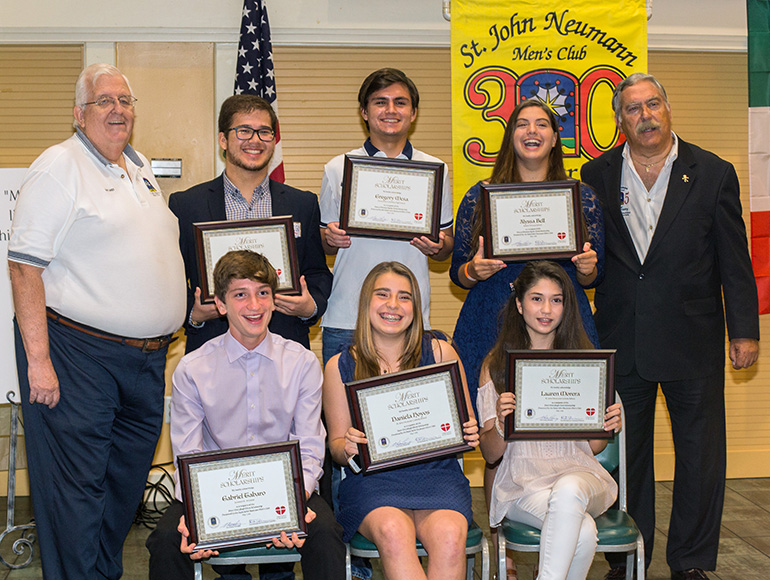 MIAMI | Thanks to St. John Neumann’s Men’s Club, three eighth graders will start high school and three high school seniors will start college with some extra cash in their pockets. The six students won an essay contest entitled, “Describe How You Overcome Challenges in Your Spiritual Life.” 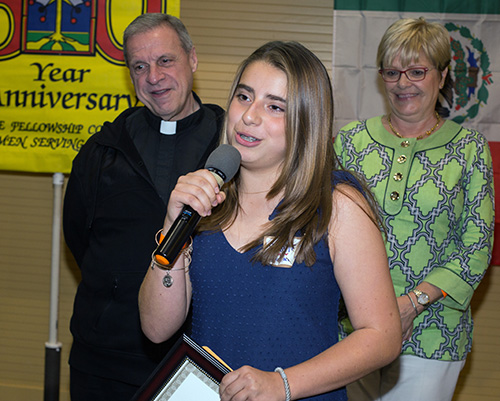 “There’s a beautiful story behind each one of these kids,” said Dan Lamey, Men’s Club president, during the group’s annual Cinco de Mayo dinner, where they gave out their first merit scholarship awards. Six white boards displayed a quote from each of the winners’ two-page essays.

Over the past two years, the Men’s Club, started 37 years ago when the parish was founded, has raised more than $8,000 for educational initiatives at the parish school and religious education program. Included in the initiatives is a software program for St. John Neumann School, said Eric Schwindeman, chair of the Men’s Club’s scholarship committee.

“We funded a reading program called Newsela,” said Schwindeman. “It’s a cutting-edge reading program for middle school students using current events and history to help them with their reading skills.”

The eighth-grade students received $250 each and the high school seniors received $500 each. Ten people, mostly educators, judged the essays.

“We hope this scholarship award program will grow and we can raise the amount in the future,” said Schwindeman. The scholarships are named for two deceased, beloved, and dedicated Men’s Club members: Peter McCullagh, middle school awards, and Deacon Thomas Aguilu, high school awards. 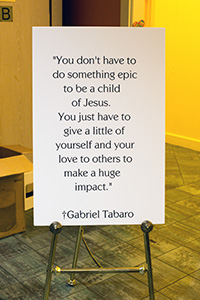 White boards displaying quotes from each of the winning students’ essays were featured at the St. John Neumann Men's Club dinner where they awarded merit scholarships to six students. 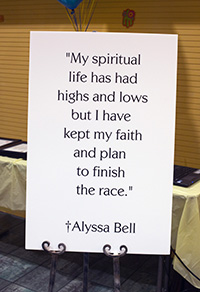 White boards displaying quotes from each of the winning students’ essays were featured at the St. John Neumann Men's Club dinner where they awarded merit scholarships to six students.

As an incentive to join the Men’s Club, essay entries were limited to members’ children and grandchildren. All six awardees are in the National Honor Society. They are:

All the students were present at the dinner and brought parents, grandparents, some friends and teachers.

Most of the students said they wanted to enter the medical field. Mesa, who will attend Dartmouth College, said he wants to be a doctor specializing in infectious diseases. Guerrero, who is going to the University of Florida, is interested in medical engineering. Bell, who will attend Florida Gulf Coast University, is interested in medical research. Tabaro is interested in the bio-medical area. Morera wants to be an environmental lawyer. The experience Hoyos had as a childhood cancer survivor influenced her desire to become a pediatric oncologist.

“I had non-Hodgkin’s lymphoma,” she said. “It changed my life and strengthened my relationship with God.”

Hoyos began treatment for the disease six years ago and is now in remission. She and her parents, Alex and Monika, are spokesmen for “Live Like Bella,” an international foundation founded in Miami in 2013 and named in honor of a Miami child who died from the disease.

Hoyos plans to attend Our Lady of Lourdes Academy and like the other students will use the scholarship money toward books, uniforms and school supplies.

Besides being a straight A student, award recipient Bell is an outstanding athlete in Monroe County, where her mother moved with her two daughters after her husband died. Her grandfather is a member of the Men’s Club and came to the dinner with Bell and her mother.

“Alyssa was All-County in softball and basketball for Monroe County,” her mother said proudly.

In the past, Bell attended St. John Neumann School. She will graduate from Island Christian School, Islamorada.

“Schools for all, where all are welcomed, really began with Christianity,” he said.

He quoted the three attributes of the Men’s Club: faith, fellowship and service.

“These are the three marks that should distinguish Christians,” Msgr. Navarro said. “Some of these students have conquered great odds through the help of God. I think it’s wonderful that these scholarships are named after two men who practiced their faith every day.” 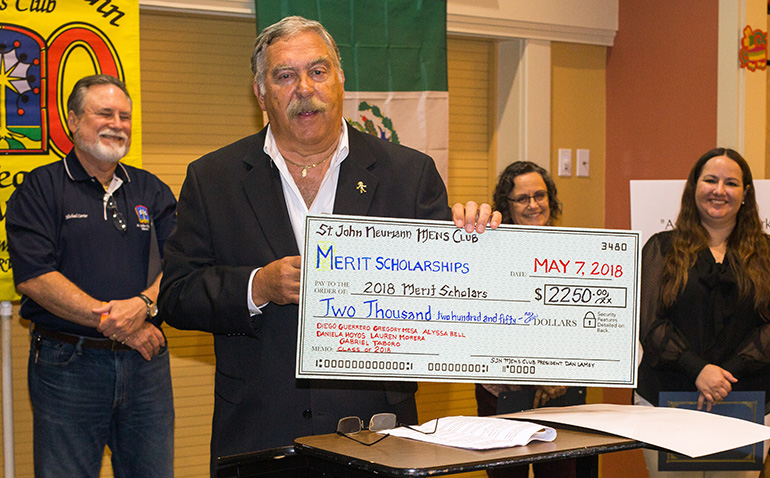 Corrected to reflect the correct name of the reading program, Newsela (not [email protected]), and the correct number of judges, 10 (not nine).

Articles(67)
Our Lady of Lourdes Academy