Archbishop Thomas Wenski will be celebrating a Mass this Thursday, Oct. 22, at 7 p.m. to mark both his feast day and the centennial of his birth. Three first-class relics of the pope will be available for veneration before the Mass, from 5 to 6:30 p.m., at Our Lady of Guadalupe Church in Doral.

The event is organized by the Servants of the Pierced Hearts of Jesus and Mary. Since attendance is limited by the COVID-19 pandemic, the event will be livestreamed on their Pierced Hearts' websites, piercedhearts.org and corazones.org (Spanish) as well as their social media platforms, Instagram (@SctjmYouth) and YouTube (SCTJM - TV).

The JPII Foundation (Pope Saint John Paul II Foundation) has asked bishops throughout the world to use the centennial as a way "to reintroduce the person of Pope John Paul II to the new generation who did not have the opportunity to live during his papacy and also to revive his memory." 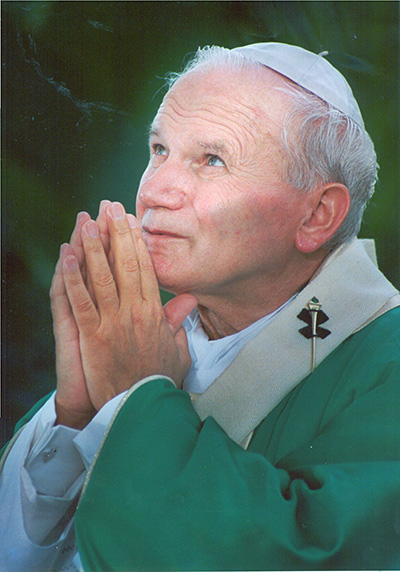 So for those who might not remember, above are some images from St. John Paul II's visit to Miami, Sept. 10 and 11, 1987. Miami was the first stop in the pope's second trip to the U.S. and his schedule those two days included some consequential events:

The pope stopped first at St. Mary Cathedral in Miami, where a who's who of archdiocesan laity, clergy and religious gave him a raucous welcome. He then stepped outside to say a few words in Creole to the Haitian crowd gathered there.

He also paraded down Biscayne Boulevard on his popemobile; stayed overnight at the Morningside home of Miami's second archbishop, Edward McCarthy, who had pleaded with the pope to visit this archdiocese whenever they met; and celebrated an outdoor Mass at Tamiami Park that was attended by over 200,000 people. The Mass was cut short by flashes of lightning and peals of thunder — a first for a papal Mass. The pope finished the celebration in a trailer located behind the massive altar and then came out to bless the persistent few who had waited out the storm.

The Voice — as the archdiocesan newspaper was then called — covered the visit with two special editions, before and after, that can be viewed and read here and here.

The theme of the visit was unity, and Miami's multiculturalism was on full display, with Cuban flags and Polish Solidarity banners; music in Spanish, Creole, English and Gregorian chant; and the Mass celebrated in three languages.

At the conclusion of the visit, Archbishop McCarthy described it as an extraordinary spiritual moment "which has helped us in South Florida to know a little better who we are and, even more, what we might become."

That message — and plea for unity — remains valid to this day.

Born in Wadowice, Poland, May 18, 1920, Karol Wojtyla was elected pope Oct. 16, 1978, and served until his death April 2, 2005, the vigil of Divine Mercy — the feast he instituted for the Sunday after Easter, based on the diaries of St. Faustina Kowalska, a Polish nun.

St. John Paul II was a pope of many firsts: the first non-Italian pope since the 16th century; the most traveled pope in history, who visited 129 countries, including Cuba and Haiti.

He also led the Church through the Great Jubilee 2000 as the world marked the Third Millennium.

Cries of "santo subito" and "John Paul the Great" arose as soon as he died. His successor, Benedict XVI, waived the five-year waiting period for canonization and proclaimed him venerable Dec. 19, 2009. Benedict also beatified him May 1, 2011, after the first miracle attributed to John Paul II's intercession. A second miracle, approved in 2013, led to his canonization April 27, 2014 by Pope Francis.

John Paul II's feast day is celebrated on the anniversary of his installation as pope, Oct. 22.

Cover of The Voice edition published in anticipation of the papal visit, Sept. 4, 1987.

Page from The Voice edition of Sept. 4, 1987, outlining Pope John Paul II's itinerary during his Sept. 10-11 visit to Miami.

Pope John Paul II prays at the Chapel of the Blessed Sacrament after arriving in Miami and entering St. Mary Cathedral, Sept. 10, 1987.

Archbishop Edward McCarthy introduces Pastoral Center employees to Pope John Paul II during his Sept. 10-11 visit to Miami. The employees had gathered in the atrium that joins the Pastoral Center to St. Martha Church, where the pope had just met with representatives of U.S. priests. At right is then Auxiliary Bishop Norbert Dorsey.

Families wait along Biscayne Boulevard for Pope John Paul II to pass by on his popemobile after his meeting with President Ronald Reagan at Vizcaya, Sept. 10, 1987.

Archbishop Edward McCarthy accompanies Pope John Paul II during his ride along Biscayne Boulevard in the popemobile, after his meeting with President Ronald Reagan at Vizcaya.

Page from The Voice edition of Sept. 19, 1987, covering Pope John Paul II's historic meeting with representatives of the U.S. Jewish community in Miami.

Page from The Voice edition of Sept. 4, 1987, anticipating the multicultural, multilingual Mass that Pope John Paul II would celebrate in Miami a week later.

View of the altar and crowd as Pope John Paul II began his popemobile tour of the fairgrounds at Tamiami Park before celebrating Mass Sept. 11, 1987.

More than 200,000 people gathered at the Tamiami Park fairgrounds Sept. 11, 1987, to greet Pope John Paul II and celebrate Mass with him - a Mass cut short by thunder and lightening.

A woman is visibly moved after Pope John Paul II's popemobile tour through the Tamiami Park fairgrounds before celebrating Mass Sept. 11, 1987. Vatican and Cuban flags seemed to be everywhere that day.

Young people from junior high through college - and others who were young at heart - filled Pod 13 at the papal Mass, easily recognizable by their yellow "pope T-shirts" and exuberant enthusiasm.

Young people, waving flags and chanting Alleluia, embodied the enthusiasm and faith of those who attended the papal Mass at Tamiami Park.

View of the altar erected for the papal Mass at Tamiami Park Sept. 11, 1987. Young people holding banners in the foreground signaled the places where priests stood to hear confessions, and would have stood to distribute Communion had the Mass not been interrupted by thunder and lightning.

Miami seminarians lead the procession to the papal altar at the start of the Mass with Pope John Paul II, Sept. 11, 1987. In the foreground is Michael Souckar, followed, from left, by Oscar Brantome and Kenneth Schwanger.

An aide holds an umbrella to shield Pope John Paul II from the rain during the Mass at Tamiami Park, Sept. 11, 1987.

Young people in Pod 13 - the youth pod - shield themselves from the rain, thunder and lightning that put a premature end to the Mass with Pope John Paul II, Sept. 11, 1987, at the Tamiami Park fairgrounds.

Cover of The Voice edition published after the papal visit, Sept. 19, 1987.

Images from the papal Mass at Tamiami Park, Sept. 11, 1987, as covered by the archdiocesan newspaper, The Voice.

Images from the papal Mass at Tamiami Park, Sept. 11, 1987, as covered by the archdiocesan newspaper, The Voice.

Corrected: The article has been corrected to note the website where the Mass will be livestreamed. It will not be livestreamed on Our Lady of Guadalupe Church's website but on the website and social media platforms of the organizers, the Servants of the Pierced Hearts of Jesus and Mary.

Alba Hernandez - 10/21/2020 06:59 PM
I am so proud to be part of the Sisters of the Pierced hearts is f Jesus and Mary fir orchestring Such a beautiful tribute to St John Paul the 11 We are really blessed to have them in Miami and working so for all these events to happen Bless you sisters

Xiomara P Ramos - 10/21/2020 05:41 PM
Please, take notice that this special event to remember Saint John Paul II is organized by Servant of Pierced Hearts of Jesus and Mary and not for Guadalupe Catholic Church as some people have said. Thanks

Martha Ruiz - 10/21/2020 05:31 PM
This event of John Paul II is organized by the Servants of the Pierced Hearts of Jesus and Mary (SCTJM) and not by the Guadalupe Parish. Thank you Mother Adela !!

Maria Elena Sacasa - 10/21/2020 05:14 PM
I would like to clarify: the event to remember our beloved Saint John Paul II, in the parish of Our Lady of Guadalupe in Miami, Florida, has been organized by the Servants of the Pierced Hearts of Jesus and Mary, not by the parish. Thank you.