We are grateful for the gift of this man

Archbishop Thomas Wenski preached this homily at the funeral Mass for Father Patrick J. Murnane, who served as pastor of Nativity Church in Hollywood for 29 years. He died Oct. 4 at the age of 85, after 59 years in the priesthood.

Today, we commend the soul of Father Patrick Murnane to our loving and merciful Father whom he served as a priest of the Church for almost 60 years.

The Archdiocese – as well as the many people whom Father touched in his long ministry – are grateful to the Murnane family for the gift of this man, who like so many of his countrymen, came from Ireland to minister here in Florida. Among those who have traveled here from Ireland is his nephew, also a priest. To his family in Ireland – and to his parish family – our condolences. A special word of condolence – but also of thanks – to those who took such careful care of Father after he was left paralyzed in a car accident. 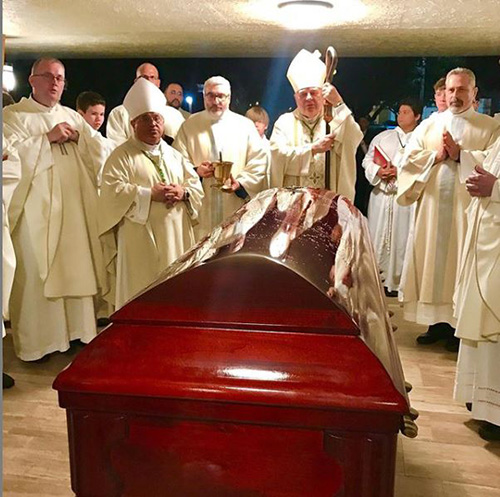 Archbishop Thomas Wenski, Auxiliary Bishop Enrique Delgado, archdiocesan priests and deacons bid a final farewell to Father Patrick Murnane after his funeral Mass at Nativity Church in Hollywood, where he served as pastor for nearly 30 years. The funeral was celebrated Oct. 11, 2019.

An old hymn has these words: Blessed assurance, Jesus is mine! Oh, what a foretaste of glory divine! Heir of salvation, purchase of God, born of His Spirit, washed in His blood.

It is in that “blessed assurance” that we find an approach to grieving that brings peace and healing – rather than the despair of those who grieve without faith.

This blessed assurance is manifested in the prayer of the Church, and that prayer both reflects and shapes the faith of the entire Church according to the principle, lex orandi, lex credenti. For example, in the Preface of the Dead, we pray, "Lord, for your faithful people, life is changed, not ended."

And in the Apostles’ Creed, probably the most ancient catechesis of the Church, we say:

I believe in the Holy Spirit
the holy Catholic Church
the communion of saints
the forgiveness of sins
the resurrection of the body
and life everlasting.

This communion of saints unites all the baptized – those who are saints in heaven, the holy souls on their way of purgation to heaven, and we the living here on earth. We are all united around Jesus’ cross and resurrection – around the Paschal Mystery that is made present in and through this Eucharistic celebration. And so, in that communion of saints, we pray for Father Murnane and we pray for those who grieve his passing.

The priesthood is a beautiful vocation – to be a man for others, to bring men to God and God to men. This is an immense treasure, and as St. Paul reminds us, it is a treasure that we carry in earthen vessels – the earthen vessels of our frail humanity. And so, we invoke God’s loving mercy on his soul and ask for him the joy and peace of eternal life in the communion of the most Blessed Trinity. As priests we know our own human frailty, and so we are not shy in asking for prayers for him – and, when we die, we beg your prayers for us, confident that the love of Jesus Christ who gave us the gift of the priesthood is stronger than death. We pray confidently, comforted by the words of St. Paul: “If we have died with him, we shall also live with him; if we persevere, we shall also reign with him.” In gratitude for his faith, his long years of priestly service, and his perseverance in his vocation, we commend him to Mary, the mother of all priests, whom we invoke as Queen of the Apostles.

In Ireland, where he will be buried alongside his parents in County Clare, there is found written on an old headstone these words:

Eternal Rest grant unto him, O Lord! May his soul and the soul of all the faithful departed through the mercy of God rest in peace. Amen.

Other News from Nativity Church