Irish-born, priest for nearly six decades, he served as pastor of Nativity in Hollywood for 29 years 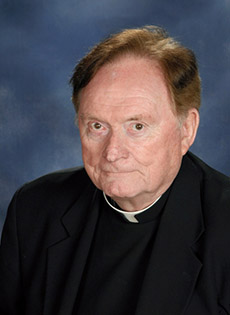 HOLLYWOOD | Elena Ortiz will never forget the day Father Patrick Murnane popped into her classroom at Nativity School in Hollywood. She had been teaching there only a few years. He asked her if she wanted to be principal.

“Just like that. I was taken aback because I loved teaching and had no ambitions to be an administrator,” she recalled. After much thought, she said, “Ok, I’ll try it for one year but if I don’t like it, I’m back in the classroom.”

Ortiz just completed 25 years as principal of Nativity, thanks to what she described as the “vision and encouragement” of her former pastor. “He saw something in me that I didn’t see. He encouraged and motivated me to reach beyond my expectations.”

Father Murnane, who served as pastor of Nativity for 29 years, died Oct. 4 at the age of 85, after 59 years in the priesthood.

Father David Zirilli, who succeeded Father Murnane as pastor in 2015, described him as “a beloved priest, who for nearly 30 years as pastor of Nativity, worked to build up the Kingdom of God and win souls for Christ — all with wit, generosity and great kindness.

“His death is an occasion of sadness for those who knew him, but it is also an occasion of gratitude to God for raising up a good and faithful priest to serve us for so many years. He was a true father and shepherd of souls. What a bountiful harvest he produced for the Lord,” Father Zirilli said.

Ortiz said she will remember Father Murnane as “an unbelievable combination of funny, witty, Irish charm, prankster (who) loved to laugh and have fun. Yet at the same time he was generous, compassionate, kind, encouraging, had a heart of gold, extremely humble, motivating. He was always looking out for everyone else.”

She recalled a priest who spent his holidays visiting the sick and lonely in nursing homes and hospitals; who would help anyone in need. “He felt people’s pain. Your problems became his problems. Your family became his family. He gave and gave and never counted the cost.”

His parishioners appreciated it, Ortiz said, and during his last five, difficult years, they gave back. Father Murnane had retired in February 2015, after a serious car accident in August 2014 left him confined to a wheelchair. Since then, teams of friends, doctors, nurses, caregivers and parishioners helped care for him so that he would not have to go to a nursing home.

“A beautiful thing happened,” Ortiz said. “People actually living their faith and giving back to the giant of a man who gave so much to all — a testament to him. He was cared for by those who loved him and had received so much from him, by those whose lives he impacted. He had a constant flow of visitors including many fellow priests, parishioners and friends.”

She added that Father Murnane “carried this heavy cross with dignity and courage. He never complained. He always thanked those of us who were caring for him.”

During his time at Nativity, Father Murnane refurbished the church, adding a new marble sanctuary, a new altar, and new stained-glass windows. He built the Our Lady of the Smile Shrine, an outdoor sanctuary for people to pray and celebrate Mass. It houses tributes to Mother Teresa, who visited the parish in 1974, as well as other saints and the unborn.

Nativity also houses Florida’s only monument to Irish immigrants, a 2,000-pound bronze image that was dedicated in 2007 and is located near the shrine of Our Lady of the Smile. The statue depicts a man and woman holding an infant and their daughter looking over a ship’s railing.

It is reportedly one of only four such tributes to Irish immigrants in the nation, but Father Murnane was quoted at the time, in a blog called Clerical Whispers, saying the monument was intended not just as a tribute to the past, but as a reminder for the present.

“This monument represents all immigrants,” he was quoted as saying. “We should not be prejudiced or tough on people who try to seek out a living (by coming here.) That’s what America was built on, really. I don’t know what’s going to happen if (the government) stops them from coming in. It’s going to be America’s loss.”

Father Murnane also built the school’s prekindergarten and library building, which is now named after him. He built the outdoor shade pavilion for the school children and beautified the campus by adding gazebos and a courtyard.

“He loved children and the school,” said Ortiz, noting that enrollment climbed from 300 to 800 after he arrived. He also began a tradition of Saturday family Masses, involving the children in many of the ministries.

“He loved to hear the children making noise at church,” Ortiz recalled. “Once a parishioner started walking out with a crying baby. He stopped the Mass and said, ‘Bring that baby back. God likes to hear kids in his house.’ He would always say, ‘Where there are kids there is hope. They are the future of the Church.’”

“I and all of us who knew him were truly privileged to have had him in our church, in our school and in our lives. I was fortunate to have called him my friend,” said Ortiz.

But then she recalled a comment from a teacher who had taught with him at St. Helen and followed him to Nativity. The teacher told Ortiz: “Gosh, I thought my family and I were the special ones. Then I realized he made everyone feel that way.”

This article was updated Oct. 7, 2019, to include additional information, including the comments from Father Zirilli and the exact dates of Father Murnane's birth, ordination and service at various parishes.