Vocations: Responding to the call

A Miami priest, a sister and a seminarian share their experiences

MIAMI | If you have ever wondered, “How do I know if God is calling me to religious life or the priesthood?”, Sebastian Grisales can tell you this: You will not see Christ in a cloud telling you, “Come, follow me.”

Grisales, a seminarian at St. Vincent de Paul Seminary in Boynton Beach, was sharing his vocational experience on the podcasts “What the Faith, Miami?” and “Cuéntame Católico,” during National Vocations Awareness Week, Nov. 3-9. The podcasts are a new project of the archdiocesan Communications Office.

Grisales was a guest on the podcasts along with Sister Andrew Marie Tyler of the Daughters of St. Paul, known as the Pauline Sisters; and Father Elvis Gonzalez, vocations director for the Archdiocese of Miami.

Grisales said God’s call is felt “in the intimate relationship one has with Christ, in prayer,” but each person experiences it differently. “Personally, I feel joy, a lasting joy, since I came to the seminary,” he said. “It’s been difficult, but the joy continues.”

He was 15 when he first felt the call but did not respond. "Maybe because of fear” of the commitment, he said.

He realized afterwards that he was not happy with a 9-to-5 job. “I asked myself the question, what truly makes me happy? And the answer was the Church, being with God.”

Grisales has spent six years in the seminary and hopes to be ordained in 2022. He is fulfilling his pastoral year at Corpus Christi parish, in Miami.

When Sister Andrew Marie saw a poster of a Catholic sister with a video camera, she found it strange. She thought that women religious only taught or cared for the sick. She asked for more information.

At that time, religious life was not in her plans. She expected to go to college, marry her boyfriend and have several children, because she is an only child. If she had any calling to religious life, she thought, it centered on Jesus in the Eucharist. “Jesus was the most important thing of my day and I wanted to make Jesus known to the world.”

That desire was not always present. Tyler studied in Catholic schools in Houston, Texas, but had never attended Mass regularly nor spoken to a woman religious. During her last year of high school, she had a crisis of faith — or perhaps a crisis of non-faith — and began attending Mass frequently. That baffled her parents, who are Catholics but not practicing. They thought that when she told them she was going to Mass, she was doing “other” things.

When she received the informational brochure from the Pauline Sisters, the first image she saw was of the sisters praying before the Blessed Sacrament. “I thought, it’s beautiful, and I closed it,” said. Then she read more: “What we do in our lives as Pauline Sisters is to bring Jesus to the whole world through the media.”

“I felt that it was what Jesus was putting in my heart and that is how it began,” said Sister Andrew Marie, who discerned her vocation in college. She joined the Pauline Sisters after obtaining a degree in literature. She currently assists the vocations director of her congregation in South Florida and works at the Pauline Books and Media store in Miami, which is also the U.S. distribution center for Spanish-language books created by the Pauline Sisters in South America.

Sister Andrew Marie said the Pauline Sisters travel a lot. “I have spent most of my life as a religious going to parishes and schools and working in mission, giving talks, and doing book fairs. This is the first time in the last 10 years that I've been in one of our bookstores full time.”

As for the sister with the video camera: she is now Sister Andrew Marie’s superior in Miami.

“We believe that we have to be young to attract young people, but it is not true,” said Father Gonzalez. “Who really influenced my vocation was a priest who was almost 80 years old.”

As a child in his native Nicaragua, Father Gonzalez remembers saying to himself, “I want to have what he has, to be with the people, always happy, and so I began to fall in love with the priesthood.”

But while completing high school in Miami, he was reluctant to tell his classmates that he wanted to be a priest. “I was afraid of being rejected, or to be called crazy, you don’t know what you're doing, do something else, have a life,” he said.

In any vocational discernment, one of the basic things is not only to hear God’s calls and feel accompanied by the Church. You also “need to be supported by the people,” Father González said.

Fortunately, he had several good friends who reaffirmed what he was feeling. That gave him the final push, along with the support of his family, to enter the seminary right after high school.

But not everyone gets that support.

“My family still does not agree with what I have done with my life. They don't understand it because it’s not their vocation and they don’t practice the faith,” said Sister Andrew Marie.

Grisales said his family was the last to find out about his decision to enter the seminary. First, he told his pastor, then his friends, and they accepted it. “My mom told me that she already knew that would happen, but my brother did not understand. He asked me, ‘So I am not going to have nephews or nieces?’”

The most recent statistic compiled by the U.S. bishops, based on 480 men who were ordained between May and June of this year, noted that 76 percent said the person who most influenced their vocation had been a priest. As to who supported their vocation: 70 percent answered the priest, followed by parishioners, friends, and lastly the family. 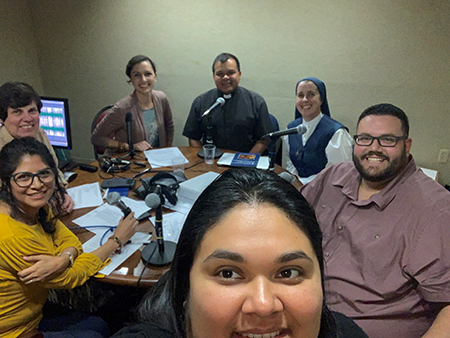 From right: Seminarian Sebastian Grisales, Sister Andrew Marie Tyler, and Father Elvis Gonzalez pose for a selfie during the taping of the podcasts, "What the Faith, Miami" in English and "Cuéntame Católico" in Spanish, alongside members of the archdiocesan Communications staff: Cristina Cabrera, Ana Rodriguez-Soto, Rocío Granados and María Alejandra Rivas (center).

“It is incredible how young men currently receive less support from their families, especially on decisions like that,” Father Gonzalez said.

Perhaps it’s because people don’t know what the priesthood is and it’s difficult to explain it to them. But perhaps it’s something deeper. “I think that anything that is transcendental, anything that is spiritual, makes people afraid,” he said. “There is a fear of commitment, even to bring a child into the world.”

Father Gonzalez continued: “Commitments are difficult because they push me out of myself. In our life as a priest or religious, and in marriage too, we are always required to walk that extra mile. We live in a world where we are focused only on ourselves.”

VOCATIONS ARE NOT EXTINCT

Some experts say vocations are dying because these are times of crisis for the Church. “But I think that all periods have had their challenges. It is not that religious vocations are dying out; perhaps they have fallen in number, compared to other years, but it is a fruitful time to speak more about vocations,” Father González said, adding that he remains hopeful despite the challenges.

To increase vocations to the priesthood and religious life, Catholics need to be authentic. “St. Paul VI said that today more than ever we need teachers, but also many witnesses,” Father González said. “The Church always needs the sanctity of the whole world, not only of the religious or of the priests, but more than anything of the marriages, of the families.”

“I think that we all need holiness, not just priests or religious. If all Christians live for Jesus, they will hear his call,” Sister Andrew Marie said.

“God calls each of us to serve him. Religious are eyewitnesses who have seen, who have been able to experience Christ in their lives and become witnesses for others. They become a way of evangelizing simply because they are what they are,” said Grisales, adding that “part of the work of religious life is to bring Christ to the people, to the world.”