First school in Miami-Dade County to achieve that honor

St. Hugh School put this STREAM logo on its website.

COCONUT GROVE | St. Hugh School has won certification in STREAM, an advanced system of education, becoming one of the first schools n the archdiocese — and the first in Miami-Dade County— to be so honored.

STREAM is an acronym for Science, Technology, Religion, Engineering, Art and Math. The Florida Catholic Conference has run the system since the 2016-2017 school year, adapting it from an initiative by the National Catholic Education Association.

St. Hugh was notified in November by the Florida Catholic Conference, said principal Mary Fernandez. She said the certification was a milestone in the school's objectives. 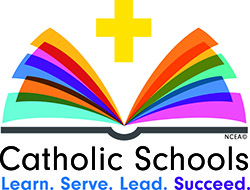 "We're not interested just in academics, but in educating the mind, the body and the spirit — how the students are going to view life," Fernandez said.

Only two other schools in the Archdiocese of Miami —St. Anthony in Fort Lauderdale and St. Bonaventure in Davie — have achieved the same certification.

The three are among nine STREAM schools in the Catholic Province of Florida, which has a total of 170 schools.

Key goals of the STREAM system include hands-on projects, creative thinking and interdisciplinary teaching. At St. Hugh, for instance, students may study the novel "To Kill a Mockingbird" for its religious components, Fernandez said.

Science at St. Hugh includes a garden, a lab and other real-life settings. Art classes bring students into studio production as well as lectures and group discussions. And mathematics blends easily with engineering.

The school is also developing on-campus technology. Devices at St. Hugh include not only iPads but Apple TVs, Clear Touch boards, a 3D printer, even robotics equipment. Most of the 35 teachers have taken courses offered by the Apple computer company, Fernandez said.

Fernandez considered the religious part essential. She said the 316 students start every school day with prayer; they also attend Mass and other liturgical events.

Social justice — "helping people in need all the time, not just with a disaster" — is another part of St. Hugh instruction, Fernandez said. The students are prompted toward activities ranging from donating socks to taking part in feeding programs.

"It's our duty as Catholic educators to make sure our future citizens — both digital and global — have that faith component," Fernandez said. "Our faith is the essence of everything we live and breathe." 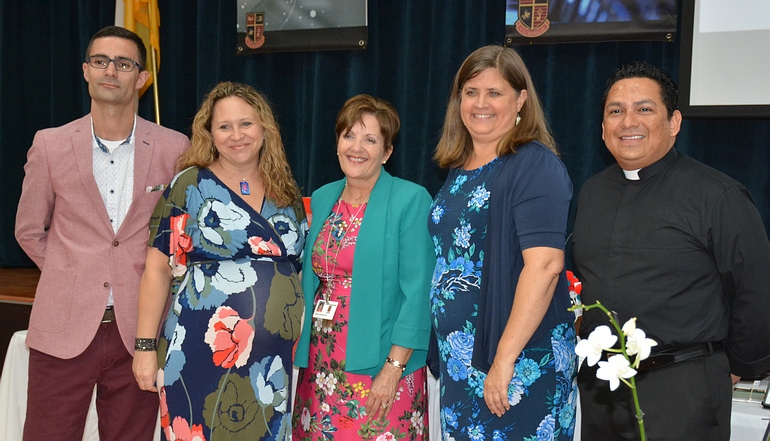 Leaders gather for the announcement of St. Hugh School winning certification as a STREAM school. From left are Robert Wright of Key West, who served on the accreditation committee; Marcey Ayers, director of special programs for the archdiocese; Mary E. Fernandez, principal at St. Hugh; Mary Camp, associate director for accreditation with the Florida Catholic Conference; and Father Luis Largaespada, pastor at St. Hugh Church.

Other News from St. Hugh School