Close to 550 choose to be 'disciples of Christ' 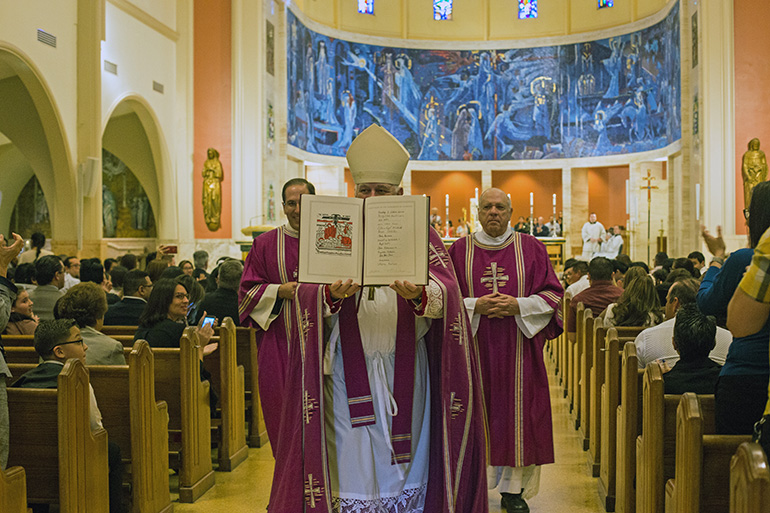 Archbishop Thomas Wenski displays the names signed into the Book of the Elect during one of the two Rite of Election ceremonies held March 1, 2020, at St. Mary Cathedral.

MIAMI | Neda Kalhor’s introduction to Jesus Christ came while listening to a televangelist.

“I started to read the Bible,” said Kalhor, 32, a native of Iran who practiced Islam. “I had so many questions to ask about Christianity. Nothing seemed to help me through the many hardships in my life. Jesus touched my heart and I wanted to accept him as my Lord and savior after I attended a Mass at St. Bonaventure Church with my friend.”

Kalhor wanted to learn more about the Catholic faith so she entered the RCIA, Rite of Christian Initiation of Adults. On March 1, the first Sunday of Lent, Kalhor was one of about 550 catechumens, representing 60 Archdiocese of Miami churches, who entered their names into the Book of the Elect.

Archbishop Thomas Wenski presided at the two Rite of Election ceremonies, held at St. Mary Cathedral. The ceremonies are for catechumens, those who will receive the sacraments of initiation — baptism, Communion and confirmation — during Easter Vigil Masses in their parishes. 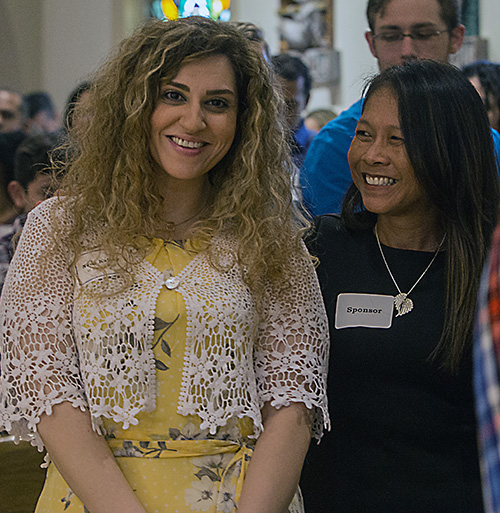 Neda Kalhor, 32, left, a catechumen from St. Bonaventure Church in Davie, stands with her sponsor, Tina McMahon, before signing the Book of the Elect at one of the two Rite of Election ceremonies held March 1, 2020, at St. Mary Cathedral. 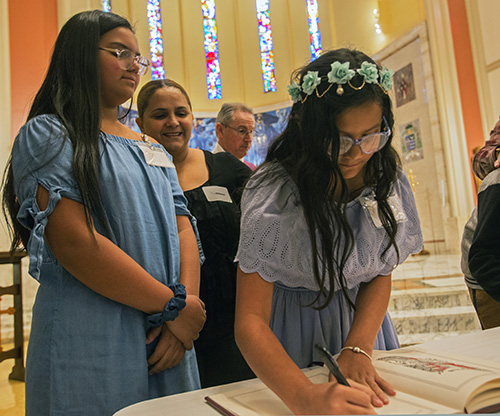 Catechumen Amanda Cruz, from Good Shepherd Church in Miami, signs the Book of the Elect after her sister, Abigail Cruz, as their mother and sponsor, DaMarie Gonzalez, looks on. They were among about 550 catechumens who took part in one of the two Rite of Election ceremonies held March 1, 2020, at St. Mary Cathedral. 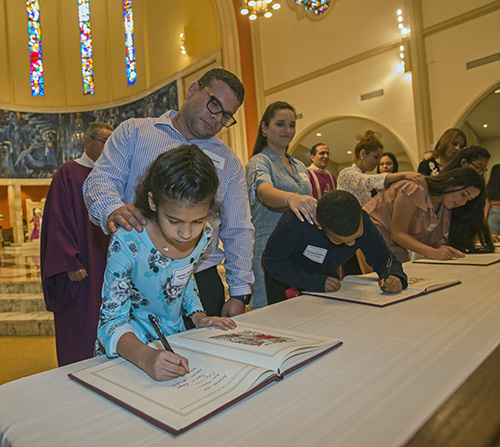 Catechumen Aislinn Izquierdo signs the Book of the Elect as her sponsor, Christopher Munoz, looks on. She was among about 550 catechumens who took part in one of the two Rite of Election ceremonies held March 1, 2020, at St. Mary Cathedral.

Although geared toward adults who want to be in full communion with the Church, the RCIA is also the method by which children over the age of 7 — the age of reason — receive the sacraments of initiation. Most of those at the Rite of Election this year were children and teenagers.

Kalhor said she was drawn to the Catholic faith by the Eucharist, and she looks forward to receiving the Body of Christ at the Easter Vigil. She stood with her sponsor, Tina McMahon, who placed her hand on Kalhor’s shoulder when Archbishop Wenski asked the catechumens and their sponsors to stand. The sponsors and the assembly affirmed the catechumens, who are on the road to full membership in the Catholic Church.

Odalys, 59, has been attending church all her life but never received the sacraments. The Everglades Labor Camp resident took classes at St. Ann Mission in Naranja. As a migrant farmworker, Odalys found it difficult to attend RCIA classes, said Sister Martha Maria Gomez-Chow, a member of the Servants of the Pierced Hearts of Jesus and Mary who serves as director of religious education at St. Ann.

“The reality is that farmworkers labor from 6 in the morning to 6 in the evening, Monday through Saturday,” Sister Martha Maria said. “They often don’t have transportation to get to St. Ann’s Mission, which serves migrant farmworkers in south Miami-Dade County. Those that are able to attend classes want to be disciples of Christ, not just attendees at Mass.”

Odalys, who is undocumented, has been taking RCIA classes for three years.

“I don’t want to die being far from the Lord,” she said. “I hope my children will follow me and receive the sacraments.”

After the catechumens signed the Book of the Elect, Archbishop Wenski and two deacons carried the open books down the church aisles for all to see as the choir sang, “You are chosen, You are blessed, You are a sign of God’s love.”

The archbishop used a New Orleans jazz anthem as an example for the catechumens.

Saint means “holy one,” the archbishop noted. In Haitian Creole, the word for saint is “zanmi bondye” — literally translated as “friend of God.”

“As the day of baptism draws near, the day on which your conversion, your turning to God and turning away from sin, is solemnized in the Rite of Christian Initiation,” the archbishop told the catechumens, “you must remain steadfast in prayer and know that your Catholic brothers and sisters are praying for you and awaiting with great joy your entry into the Church.”

This article has been edited to explain why children over the age of 7 are included in the Rite of Christian Initiation of Adults. For more information, click here. The headline also has been changed to reflect the actual number of catechumens who took part in the Rite of Election. 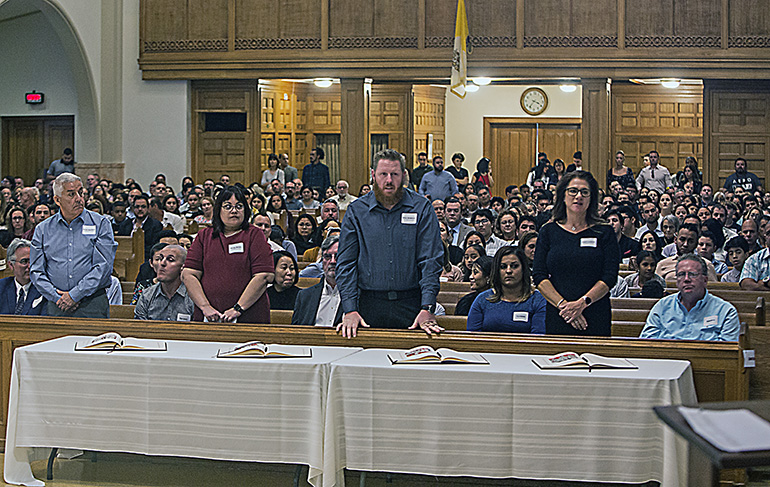