To which Bishop Marc Stenger, of Troyes, France, replies: That is the Gospel.

“We must apply the concrete Gospel,” said the co-president of Pax Christi International. The organization, founded by a lay woman after World War II as a means of reconciliation between France and Germany, preaches non-violence and works for peace. It describes itself as “the Catholic peace movement rooted in the Gospels and Catholic social teaching.”

Bishop Stenger sees its work as “conscience-raising” — which is fine in the abstract. But in the real world, “conscience-raising” entails criticizing nationalism, defending immigrants, pointing out economic injustice and reminding people to care for God’s creation. That touches on some of the most divisive topics of our time. Some go so far as to call that communism. 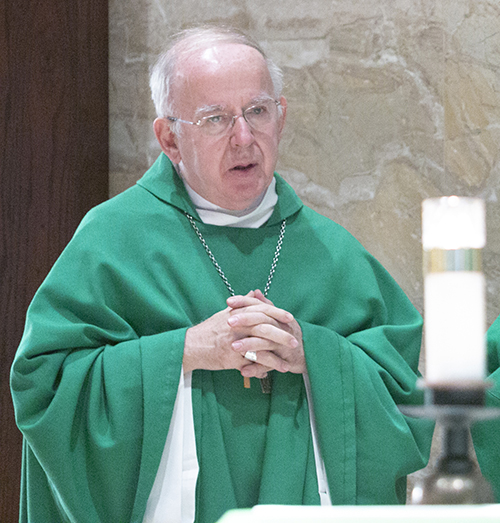 Bishop Marc Stenger of Troyes, France, representing the French bishops' conference, prays during the Mass celebrated at the Pastoral Center during the meeting of PROCHE representatives in Miami, Oct. 29, 2019. He is also co-president of Pax Christi International.

“It’s not communist,” Bishop Stenger told the Florida Catholic during a brief interview at the end of October. He noted that Pax Christi has “a bishop president. It’s a part of the Church.”

In fact, it was the future St. John XXIII who, while serving as papal nuncio in France, asked the cardinal bishop of Paris to become president of Pax Christi International back in 1949. Today, Bishop Stenger serves as co-president along with Sister Teresia Wamuyu Wachira of Kenya — one president for the northern half of the world, the other for the southern half.

Among its international projects are the Catholic Nonviolence Initiative, the Pax Christi International Peace Prize and, in Africa, a program called Empowering New Generations for Active Nonviolence. Pax Christi also works through a worldwide network of partners and chapters, including Pax Christi USA. Miami has a chapter which is becoming active once again.

Bishop Stenger was in town because he also serves as the French bishops’ representative to PROCHE, an anagram which in French stands for “Proximity with Haiti and the Church,” or “Partnership for Church Reconstruction in Haiti.” PROCHE is a cooperative venture between donor churches in the U.S. and Europe and the bishops of Haiti. The organization was formed to help Haiti’s churches rebuild after the earthquake that devastated Port-au-Prince and surrounding areas in January 2010.

“Jesus brings us peace and we will develop this peace of Christ — not our peace, not human peace,” Bishop Stenger said. To achieve that, “we must change the relations between people — of violence, of domination. Jesus has said we are brothers. We must see other ones as brothers, not as an enemy, not as one below us.”

That’s where immigration comes in.

“Immigrants are not people that will come to us to take our things,” Bishop Stenger said. They are people with no possibilities for survival in their own countries. “We must receive these people.”

And while it’s up to the state, or government, to organize their reception, “for us it is our responsibility to help our brothers,” the bishop added.

Which naturally leads to talk about climate change.

“We cannot accept climate change,” he said, “not for scientific reasons, (but) for human reasons — the consequences.” He added that “we must live in another way to not disturb the creation.”

For Pax Christi and the Church, all those teachings arise logically from the Eucharist, which is at the center of everything. “Jesus has given this for us, for all the people, not for selected people,” Bishop Stenger said.

Which is why, in the face of criticisms, he replies: Pax Christi strives to put into practice the social doctrine of the Church. “We are not communists. We are disciples of the Gospel.”

Gustavo - 12/13/2019 11:02 PM
This is sad. The Lord's church (in its human element) is falling apart. Look at the statistics. Most Catholics don’t even believe in the Eucharist as being the Body, Blood, Soul, and divinity of our Lord Jesus Christ. And yet all we get from these prelates are fake climate change is running the world. Immigration (which is a prudential issue) has become the eighth sacrament. And economic injustice much of it which is caused by the same policies these prelates support. (Socialism, liberation theology, etc). To my fellow Catholics, we are Pilgrims on our way to eternity. It may be heaven, hell or purgatory. The only thing I can say to you is to keep your eyes on the prize don't be demoralized. –Pax Christi