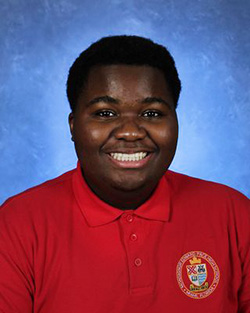 Carl Marius, a junior at Msgr. Edward Pace High School in Miami Gardens, won a gift package and $ 100 for his essay on the Venerable Pierre Toussaint, submitted for the Black Catholic History contest sponsored by the Archdiocese of Miami.

The annual event is held to promote and encourage the Catholic community to celebrate Black Catholic History Month in November.

Marius entered the high school division of the contest and his essay focused on Pierre Toussaint’s service to the people and the actions that led to his being declared venerable — the second of four steps on the road to sainthood.

“I chose Pierre Toussaint because I felt like he was a great example of perseverance... I really liked the idea of doing a contest that involved saint representation. It allowed me to relate to a saint and help me understand what they had to do to prove themselves,” Marius explained.

He said he meticulously structured and drafted the essay for weeks, and credited the help he received from his English and theology teachers, Florence Krulik and Ricardo Gonzalez.

Marius will be receiving a winner’s package and $100 gift card for his accomplishment.

“I think that dedication can really take you far," Marius said. "This contest showed me that I have so much more potential.”