Ministry in the time of COVID-19

Instagram post from Father Phillip Tran, Catholic chaplain at the University of Miami, sharing his view of St. Augustine Church in Coral Gables while livestreaming a Mass during the coronavirus quarantine, March 31, 2020.

MIAMI | At the start of his papacy, Pope Francis called on priests not to wait for the faithful to come to them, but to leave their churches and go meet the faithful where they lived. Ironically, it took a pandemic-induced quarantine to make those words come true — at least virtually.

Priests in the Archdiocese of Miami — and indeed throughout much of western Europe, Canada and the U.S. — are now coming into their parishioners’ homes nearly every day via the internet. The faithful have no excuse to miss daily or Sunday Mass, as these are celebrated at all hours through livestreams on Facebook and YouTube. 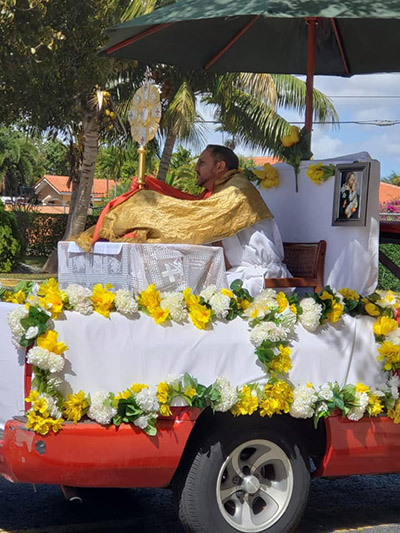 Father Julio De Jesus, pastor of St. Benedict in Hialeah, rides around the neighborhoods displaying the Blessed Sacrament. It's one of the first things he did when Masses with congregations were canceled in mid March. 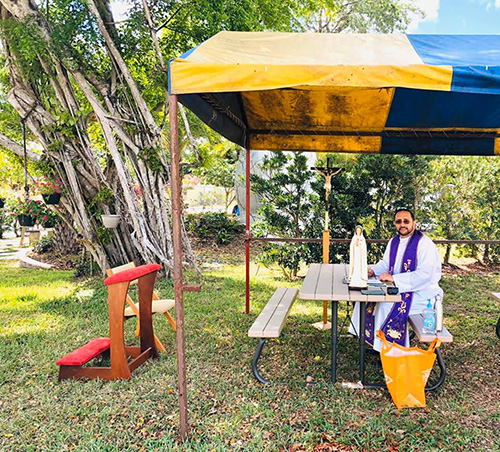 In late March, Father Julio De Jesus, pastor of St. Benedict in Hialeah, poses in front of the outdoor confessional space he improvised on the parish grounds. Note the social distance.

And priests in South Florida are doing much more than that, rapidly bolstering their technical savvy as they livestream, post and record everything from children’s story time and Divine Mercy chaplets to SoulCore prayer and fitness classes, daily or weekly reflections on the scriptures, and even a musical riff on Easter using the Beatles classic “Here Comes the Sun” (click here for story).

As Holy Week approached, several parishes were offering drive-thru confessions, using cellphones to help the priest and penitent communicate without shouting across the parking lot — until a March 26 directive from the Holy See banned the use of cell phones due to concerns about security gaps or electronic eavesdropping that would conflict with the “absolute inviolability of the confessional seal.”

A few days later, on April 1, Archbishop Thomas Wenski asked parishes to suspend all drive-through operations and anything else “that would encourage people to leave their homes,” in order to comply with restrictions imposed by civil authorities — as well as the recommendations of experts in epidemiology.

“What I wanted to avoid was big crowds coming out,” the archbishop explained, especially since the virus can be transmitted by people who have no symptoms. “We don’t want to put anybody at risk.”

He stressed that South Florida parishes and schools “never closed” even though social distancing and stay at home mandates prevented priests from celebrating Masses with congregations or scheduling activities that would bring out large groups.

“That being said, priests were answering the phones, responding to sick calls and if somebody stopped by the rectory, which was open for business, they certainly could get confession,” the archbishop said.

The weekend before the stay-a-home order, about 150 cars had lined up for drive-through confessions at Our Lady of Guadalupe in Doral. “In these times, a lot of people have the need to be reconciled with God, to feel that reconnection in this moment of distress. For a lot of people that brings them a lot of comfort and peace,” said Guadalupe’s pastor, Father Israel Mago. 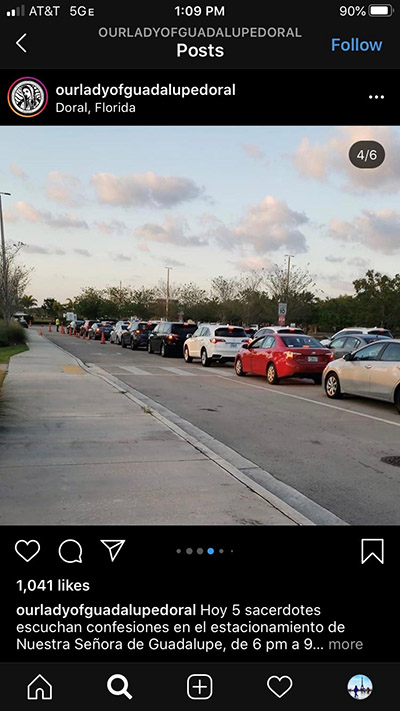 Image of the line of cars that formed around the parking lot of Our Lady of Guadalupe Church in Doral for drive-thru confessions held March 27, 2020, from 6 to 9 p.m. The caption says five priests were on hand to hear the confessions. A few days later, such drive-thru gatherings were canceled to prevent crowds from forming outside churches, which would put people at risk of contracting COVID-19. 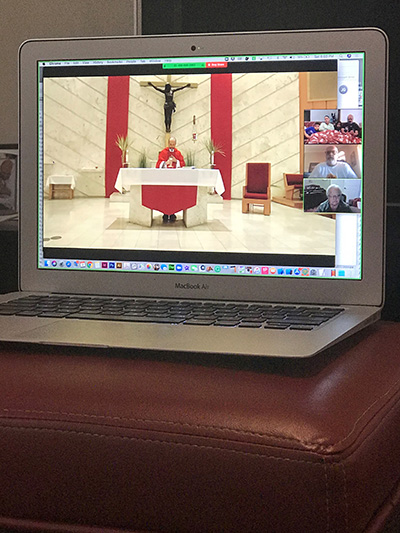 This is how Dan Gonzalez, a parishioner at Our Lady of the Lakes in Miami Lakes, watched the Palm Sunday Mass April 5, 2020, alongside his mother and brother: "We created a Zoom meeting and invited my mom and my brother. Once they all logged in, I opened the Mass livestream in my browser then shared my screen with those in the Zoom meeting. This way we all could see and hear the Mass and each other at the same time. Worked great! You could probably do this with any number of people in the Zoom meeting."

The fact is priests are just as frustrated as the faithful at not being able to see their parishioners face to face. Father Phillip Tran, Catholic campus minister at the University of Miami, posted a picture on Instagram March 31 of a totally empty St. Augustine Catholic Church in Coral Gables, where he celebrates Mass for both the students and the community.

“It really hit me today, this has been my view while celebrating Mass,” he posted, using the #emptychurch and #missingyou hashtags. “Something moved me today while I was offering the 8 a.m. Mass, the idea that while the church is empty that you all are there in Mass with me through those cameras, but the pain is very real! I'm really starting to miss everyone and I guess maybe that's part of the Lord's lessons in all of this, is to appreciate the things that we have; as we know, it's when they're gone that we begin to realize what we took for granted! Missing you all and praying for you!”

Father Richard Vigoa, administrator at St. Augustine, described a common experience among priests when he said the pandemic challenged him to “ramp up our technology.”

In addition to Mass, St. Augustine streams multiple online ministries, from town hall meetings to a SoulCore class of rosary and exercise. The parish even offered a virtual retreat one-day retreat for young adults April 18, using livestream and Zoom.

“I’ve made a point to call parishioners to check on them. I’m sending texts to them, emails with video messages, I’m using Instagram and Instagram Live every day. So it’s a whole slew of new ways to be connected with the community,” Father Vigoa said before a bout with COVID-19 sidelined him for 18 days. “We have to preach the Gospel in new ways and with fervor and energy and love for God’s people.”

After prayerfully watching St. Augustine’s online Sunday Mass, Alejandra Alvestegui said it “took me to another level of spiritual exercise.”

“When it came time for the consecration we got on our knees as we normally do,” she noted. “Our Lord is there is a special way so in reverence we prepare for Communion but in a spiritual way.”

She also was grateful to have received the sacrament of reconciliation before the drive-thru sessions were canceled. “The sacrament of reconciliation is the door to mercy, it is where we look into our souls, where we find great spiritual healing and grace, so it meant a whole lot,” she reflected. “It was a wonderful effort of St. Augustine Church to find a creative way to help us spiritually during these uncertain times.” 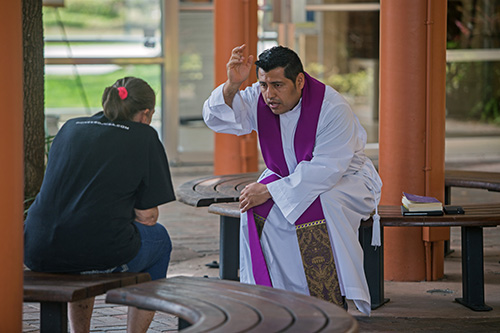 Father Antonio Tupiza hears a confession in the kiosk area of St. Rose of Lima Church, Miami Shores, March 28, 2020. Priests in the archdiocese continue to hear confessions by appointment while following social distancing measures to protect themselves and parishioners against COVID-19.

Over at St. Thomas the Apostle, pastor and erstwhile traffic controller Father Alejandro Rodriguez Artola had to scrap his popular drive through confessions. But providing spiritual refuge from the viral onslaught, he continues to livestream Masses and recently preached on how Catholicism isn’t just for regular Mass-goers but for everyone.

“I’m the videographer and work the audiovisual board, mixing and zooming in and slipping slides in and out and all sorts of livestreaming techniques I’ve had to learn,” Father Rodriguez mused. “You try to be as innovative as possible. Our mission to evangelize and bring Jesus Christ to be known and loved by everyone is unchanged.” 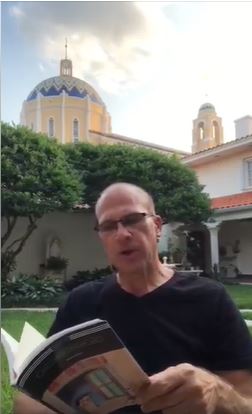 Father Christopher Marino reads a chapter from Carlo Collodi's "Pinocchio" during one of his "Storytime with the Rector" segments on St. Mary Cathedral's Facebook page.

In front of St. Mary Cathedral, rector Father Christopher Marino now hears confessions by appointment. “We stand six feet from each other so we continue confessions but not in a regularly scheduled time,” he said. “Sin continues and grace continues too.”

Father Marino also has been forced to get techy and fast. During Lent, he led a Stations of the Cross in the school courtyard and made a welcome video to inaugurate St. Mary’s online school. The book-loving priest also hosts “Storytime with the Rector” on Facebook, where he reads two chapters daily from classic children’s books — currently “Pinocchio.”

“They’re proving to be wildly popular. I hate to say it but in some cases they’re more popular than the Mass,” Father Marino admitted. “This is a moment for me to expand my creativity.”

While some parishes only livestream Sunday Masses, the cathedral livestreams every one of its daily and Sunday Masses. Father Marino echoed many of his fellow priests when he expressed hope that, after the crisis is over, Catholics will return to church with a deeper appreciation of the Eucharist.

“I think there are great positive things that can come out of this so long as we approach it as people of faith connected to the Lord,” he said. “Be not afraid, don’t give into hysteria and pandemonium. We’re all looking for a cure right now. The cure for fear is faith.”

Ana Rodriguez-Soto contributed to this report. 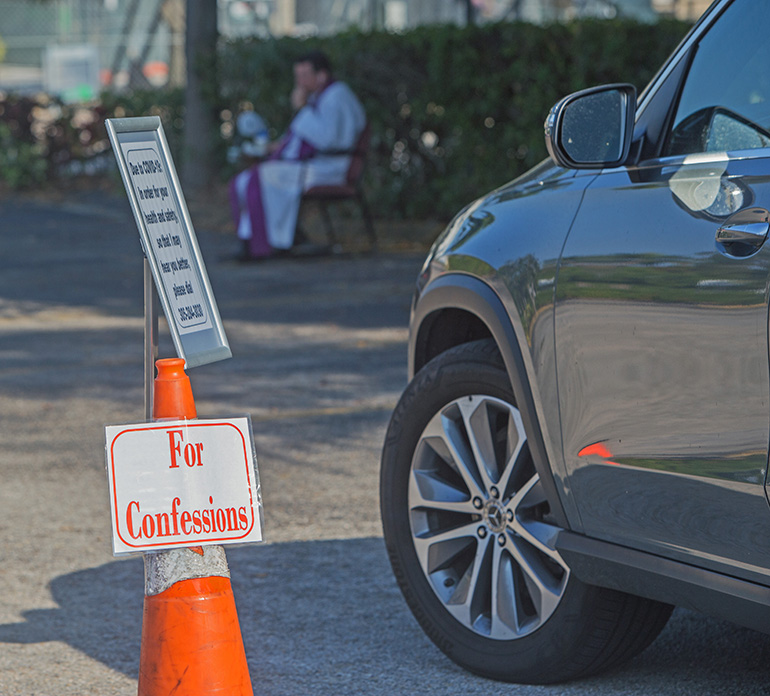 Father Richard Vigoa hears confessions in St. Augustine Church's parking lot March 26, 2020. A day later, a directive from the Holy See banned the use of cell phones due to concerns about security gaps or electronic eavesdropping that would conflict with the "absolute inviolability of the confessional seal." A few days later, on April 1, Archbishop Thomas Wenski asked parishes to suspend all drive-through operations and anything else "that would encourage people to leave their homes," in order to minimize the risks of contagion.

Articles(74)
Our Lady of Guadalupe Church