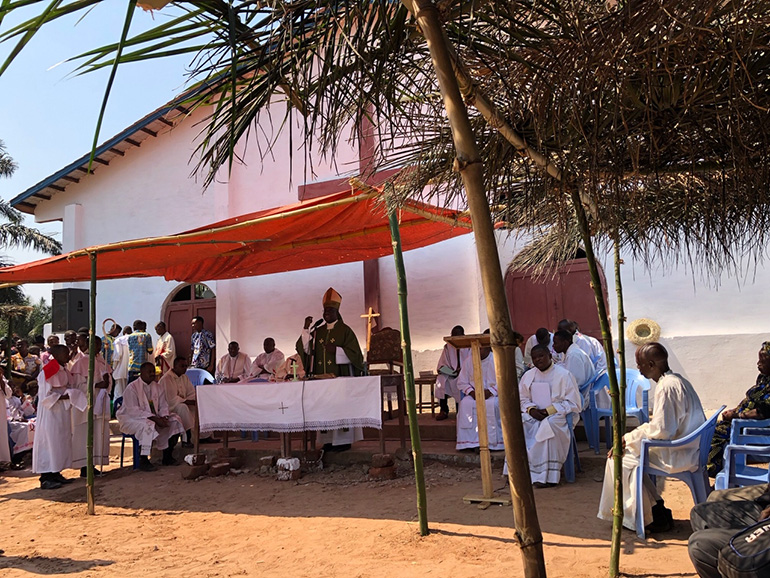 Bishop Emmanuel Bernard Kasanda of the Diocese of Mbuji-Mayi celebrates the Mass during which he dedicated the first church in the Kasai-Oriental village of Mpiana Nita.

CORAL GABLES | The Hope for Kasai nonprofit team journeyed in July from their home base in Coral Gables to the Democratic Republic of Congo to accomplish their summer health and education mission — undeterred by the African nation’s ebola outbreak that has killed over 1,800 since August 2018.

The heart of their spiritual celebration was the July 4 Mass of dedication for the Kasai-Oriental village of Mpiana Nita’s first church, alongside some 3,000 joyful residents who had previously worshiped outside. 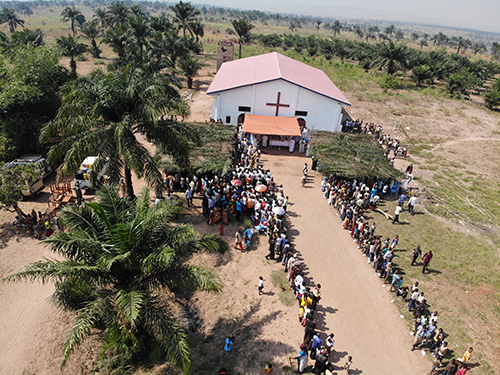 View of new brick St. Pauline of the Agonizing Heart of Jesus Church in the Kasai-Oriental village of Mpiana Nita, constructed by Hope for Kasai and funded by private donations earmarked for evangelization.

The new brick St. Pauline of the Agonizing Heart of Jesus Church is a spiritual bastion for this dusty, primitive community of approximately 10,000 inhabitants who sleep in thatched huts on dirt floors. Upon arrival, the nonprofit’s team installed Stations of the Cross and other items donated by Miami priests and supporters.

During the over five-hour celebration, Bishop Emmanuel Bernard Kasanda of the Diocese of Mbuji-Mayi blessed the house of worship. He presided at the Mass accompanied by 22 concelebrants, including Father Theodore Kanyiki Ilunga, who visited the Church of the Little Flower here in 2016. Worshipers danced and sang in praise and girls sported Kasai-sewn headbands and colorful dresses.

The following weekend, 21 children received the sacraments of baptism and first Communion in new dresses and outfits donated by St. Theresa School’s second graders. While the Kasai foundation funds humanitarian projects, the church was constructed by private donations earmarked for evangelization. 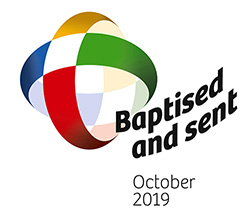 “It’s our first Catholic church so it was a big event. And now we have a priest who is living there” instead of just going on weekends, said Hope for Kasai founder Ani Rincon. “He’s doing Masses, baptism, first Communion, daily Mass. For us it’s a blessing.”

Rincon, Roxann Uddenberg and nine others journeyed 24 hours to the capital of Kinshasa, then to the Kasai city of Mbuji-Mayi. From there they took a five-hour bumpy trek to Mpiana Nita.

They carried with them 23 bags of donated supplies including 249 pencil pouches and over $2,000 in sandals from the fourth grade of Sunset Elementary; over 60 Catholic school uniforms collected from Our Lady of Lourdes Academy; 800 T-shirts; 52 soccer uniforms and 87 pairs of cleats donated by Player to Player, a group founded by Christopher Columbus High School senior Daniel Gonzalez, plus 43 more soccer uniforms from St. Theresa. They also brought 217 new dresses sewn at their annual dressmaking event — making a total of 1,300 stitched since 2015.

“They look forward to getting the T-shirts. They love to see how they look. I took a picture and showed the girls. They don’t have mirrors,” said Uddenberg. “When the boys and girls are shown the pictures and videos they start laughing.”

In Mpiana Nita, the team rose each morning for 6:30 a.m. Mass. They first visited the 20,000-liter water collection and filtration system, funded by $56,000 raised from St. Theresa, where villagers now fill their jugs with clean spring water. “Before they used to dig holes and waited for the rain, collected water from puddles, dirty water,” Uddenberg said. 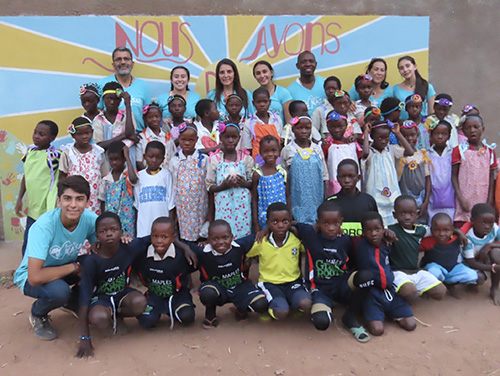 Hope for Kasai missionaries from South Florida pose with children from the village of Mpiana Nita in front of the mural painted by Our Lady of Lourdes Academy student Emma Uddenberg. It reads, "We have hope" in French.

The maternity center built in 2014 provides women a cleaner, safer space to give birth with its own 15,000-liter water reservoir. And girls now head after school to the six-machine sewing center where Uddenberg, who has knitted some 300 headbands for children since her first trip in 2016, taught eager apprentices to make dresses.

“They have mastered the needle work and now they are on to the sewing machines,” said Rincon. “They can’t wait to go to the sewing room every single day.”

Uddenberg and her daughter, Erin, a Lourdes Academy graduate, also distributed some 600 cloth sanitary pads that they made after learning on their 2016 trip that girls missed school during menstruation due to lack of pads. They created a pattern so that girls who learn to sew them themselves.

“I wanted to use everything my mom has taught me to help empower these young women because they should have the ability to achieve their goals,” said Erin, now 19. “Seeing their faces beam with hope fills me with such joy. The idea that their classes do not have to be sacrificed for their health reinforces that their education does not matter less because of their gender.”

Erin’s sister and Lourdes student Emma, 16, said she is proud of the mural she helped paint outside the sewing center, with sunrays and handprints that reads, “We have hope” in French.

At the two elementary schools, the Kasai team greeted 792 excited pupils and delivered pencil pouches with supplies. The children frolicked with bubbles and balloons for the first time. “It’s like Christmas morning for them,” Uddenberg said.

“It’s amazing because now that they’re being sponsored, they go to school, they learn and they are so happy and they come looking for you,” she said. “It can change a child’s life for a dollar a day.” 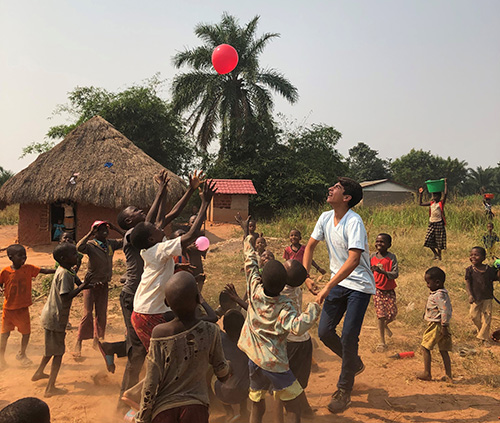 A young Hope for Kasai missionary from South Florida plays with children the village of Mpiana Nita, Democratic Republic of Congo. The organization has built a church, a sewing center, a maternity center and water collection and filtration systems since its founding in 2012.

Hope for Kasai also seeks to deepen its school partnerships. This past year, Rincon’s son, Manuel, and brothers Nicolas and David Alarcon of Belen Jesuit Prep raised funds through the G.O.A.T. Education project to buy 27 goats for families to support school tuition. In Kasai, the boys delivered goats to families.

Another goal is to build an actual school building; students now sit on dirt floors under shelters that must be rebuilt after the rainy season. Moreover, they dream of establishing a secondary school — the first school to go beyond sixth grade.

A Colombia native, Ani Rincon met Congolese Father Ilunga in 2010 on a pilgrimage in Fatima, Portugal, where she found her call to serve in Africa. She established Hope for Kasai in 2012. This trip was Rincon’s seventh trip and she said she felt God’s presence throughout, starting with a luggage fee waiver from American Airlines. “When we work together and the community is united, I think we can do more. We have to spread the word.”

Rincon noted that St. John Paul II called Africa the hope of the world, with the highest growth rates in the Church. As they departed, Father Ilunga acknowledged their sacrifices. “Father said these sacrifices are not a waste, you’re not wasting your time and money. This is priceless, this way you’re teaching your family, your kids, what they can’t get at the best university.”

So Rincon plows ahead, convinced that “All time spent on a mission of God is time spent in grace and a true gift from heaven.” 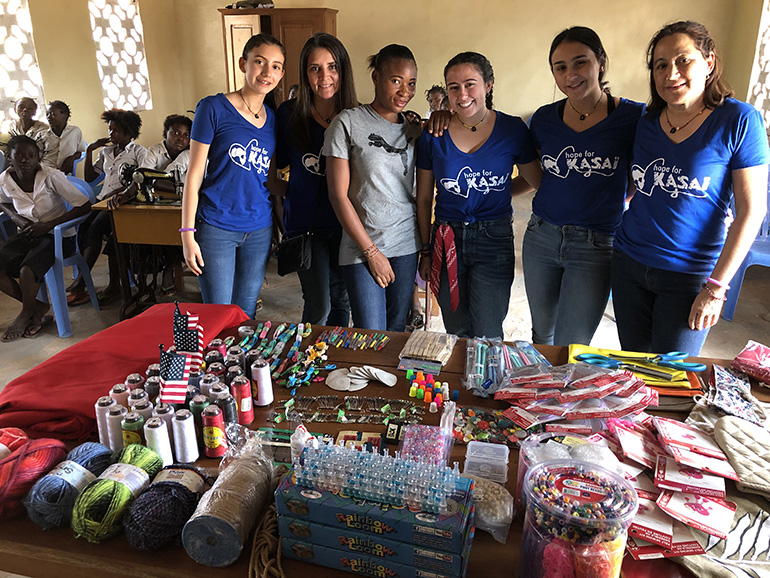 Hope for Kasai missionaries from South Florida pose with some of the donated items they brought for the sewing center in Mpiana Nita, Democratic Republic of Congo.