Local missionaries reflect on their experiences, question who 'saves' whom 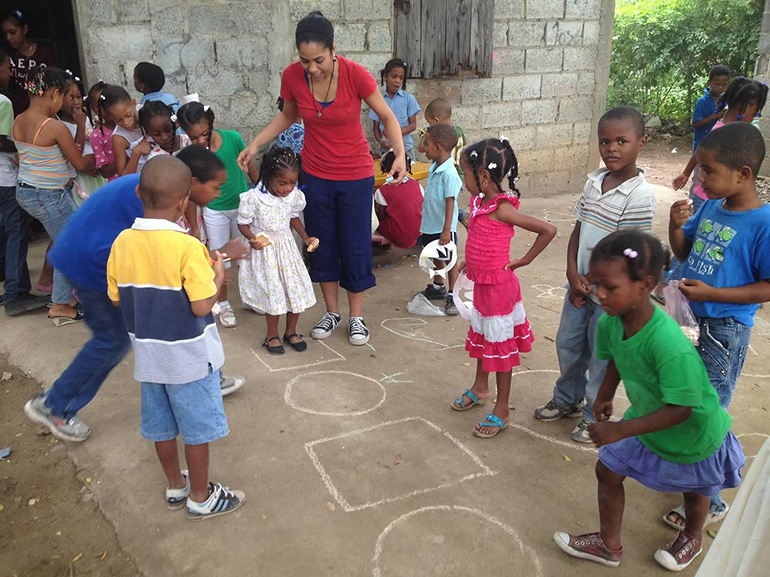 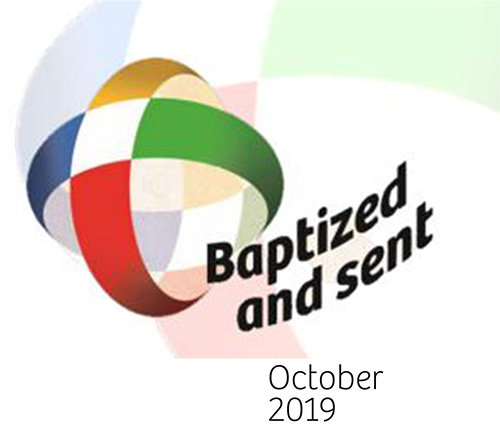 The logo of the Extraordinary Missionary Month October 2019 is a missionary cross where the primary colors refer to the five continents. The Cross is the instrument and direct sign of communion between God and man for the universality of our mission, and through its vibrant colors, a sign of victory and resurrection. The world is transparent because the action of evangelization has no barriers or boundaries, it is the fruit of the Holy Spirit. Christian charity and the world transfigured in the Spirit overcome distances and open the horizon of our minds and hearts. The words Baptized and Sent next to the image indicate the two characteristics of every Christian: baptism and proclamation.

MIAMI | Pope Francis declared this October Extraordinary Missionary Month, to stress the fact that we are all “baptized and sent.” In keeping with that theme, the Florida Catholic decided to bring the missions home by asking some of our local missionaries to share their experiences. Here’s what they told us. 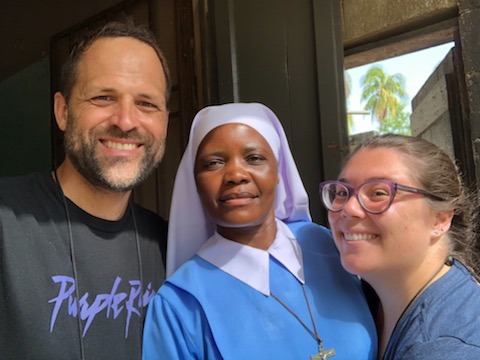 Andres Novela and another missionary from Amor en Accion pose with a sister from Haiti during a mission trip to the island nation. 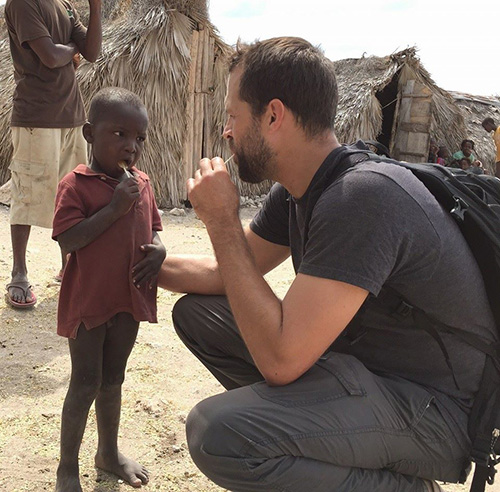 Andres Novela (right) shares a yummy treat with a new friend during a mission trip with Amor en Accion to Haiti.

Over a decade ago, Andres Novela went on a mission trip to northern Haiti. In the mountain village of Mare Rouge, another missionary group was sharing their plans with the community. He remembers seeing a small nun sitting in the back of the room, scowling throughout their entire presentation. When they finished, she stood up and spoke.

“You treat us like dogs,” Novela recalled her saying. “You come into our village and our communities with your bookbags and your fancy water bottles because if you drank our water you would be in the hospital — if we had a hospital. You’ve taught our children to beg, to extend a hand every time they see a white face. That’s not solidarity. That’s not a relationship. If you want to help us, listen to us. We know our problems, and we know the solution to our problems. What we lack is not intelligence or initiative. We lack the resources that you have. So sit and listen to us, and then we’ll talk about partnering, and then we’ll talk about solidarity.”

Novela said it felt as though she had gut-punched everyone in the room. Her words served as a reality check for what it means to be a missionary.

“It’s not about us coming into someone else’s world and changing things. It’s about humbly entering someone else’s space, and being receptive to and being guided by those people whose home we’re entering,” said Novela.

He keeps that story in mind whenever he travels on missions, as he has done for years with Amor en Accion, a lay missionary community founded in Miami. Amor en Accion has assisted impoverished communities in Haiti and the Dominican Republic for over 40 years. It is the missionary arm of the archdiocese to Miami’s sister diocese, Port-de-Paix, in Haiti’s remote northwest.

Being a missionary doesn’t mean being a savior or crusader, or a Bible-toting converter of “others.” It is about evangelizing by extending a hand and creating relationships.

‘I THINK WE GO TO GET SAVED’ 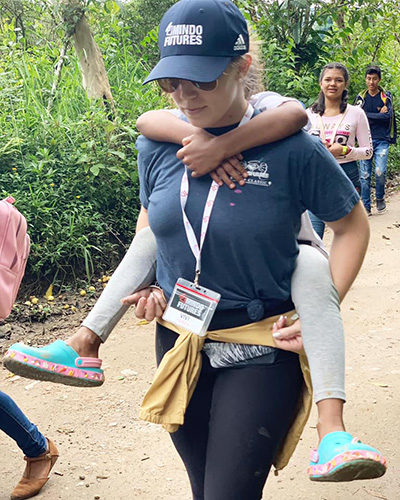 Viviana Yerex is another Miami missionary. She volunteers with Mindo Futures, an organization based in Mindo, Ecuador, that established ties in the late 1990s with Miami’s Our Lady of Lourdes Academy and Immaculata-La Salle High School.

Yerex found out about the missions through friends at her parish, St. Hugh in Coconut Grove. They were going on a medical mission, so Yerex signed up. They sent her instead to the Miracle of Mindo, an orphanage and school for poor or abandoned children founded by a nun named Sister Lucia, known as La Chia.

“I was super bummed totally going into it, for the wrong reasons, not realizing what I was about to get into. And now, four years later, I have sold my soul to the organization, to that school, to those kids,” said Yerex.

Miracle of Mindo has a spin-off, the Mindo Bridge Program, which enables students from the school to attend college. Mindo Bridge fully covers their tuition, housing, tutoring, career counseling and work study at a university in Quito.

“Very few students have the blessing of being a part of it,” Yerex said, because funds are so limited.

Many of those students also are the first from their towns and villages to go to college, or even travel outside their hometowns. When they visit, the missionaries hear their stories: how blessed they feel for being given the opportunity not only to improve their lives, but those of their families.

As she sat listening to them during one of those visits, Yerex recalled feeling guilty. “I have FIU around the corner,” she thought, and she had yet to finish her degree. She made a promise that she would not return to Mindo until she finished her education. Eventually, she did both.

“When I went back and shared (that) with them, they were in shock that they even had done anything to better my life. They really have no idea what they do for us,” Yerex said. “I think we go to get saved.” 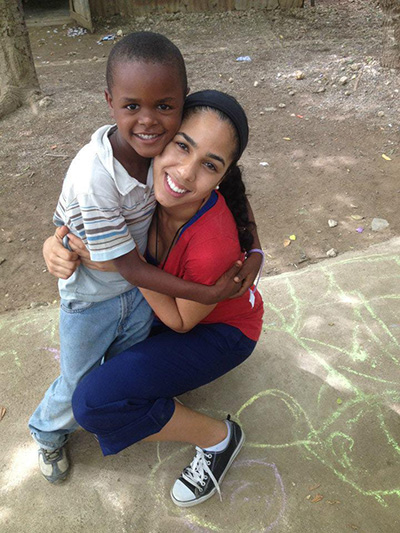 Amor en Accion missionary Janelle Jay gets a big hug from a new friend during a mission trip to the Dominican Republic.

Janelle Jay first went on an Amor en Accion mission trip when she was 17. Later, while in college, she was asked to pick up a missionary from the airport who would be traveling with the group. The woman asked Jay if she was a missionary.

“I told her I did missions, but I wasn’t a missionary. Now I look back, and yes, I am a missionary,” said Jay, who serves as the mission coordinator of Amor en Accion.

She continues to go on missions for many reasons but points to one experience in particular: a little girl from the Dominican Republic, 2 or 3 years old, who captured her heart. Every time she returned, Jay would seek out both the girl and her sister.

Then some years passed before Jay could return to that village. This summer, she had the chance, so she once again went looking for her friend. The principal of the school where the girl is enrolled shared some insights.

“She told me because I came back and sought her out throughout all of those years, it made all the difference,” said Jay. “I cared enough to look for her, to look for her family, to look after them. It’s very simple, and we turn it into this big thing that, really, it’s not so complicated: to share love and to show that we care for someone else.”

‘AN INSTRUMENT’ OF GOD 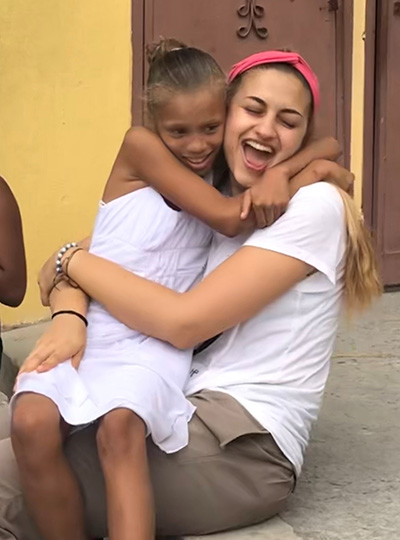 Amor en Accion missionary Lucia Pannunzio gets a big hug from a new friend she made during a mission trip in the Dominican Republic this summer. 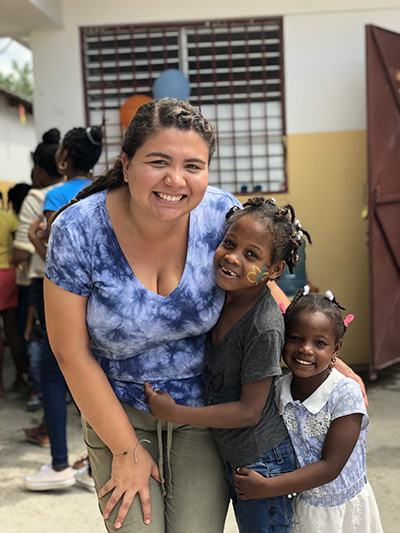 Summer 2012-2019 MIAMI Amor en Accion missionary Orianna Cardoza gets a big hug from new friends she made during a mission trip in the Dominican Republic this summer.

There are many things 18-year-olds look forward to when they hit that “adult” marker. For Lucia Pannunzio, turning 18 meant that she could finally go on a mission trip with Amor en Accion. A member of Our Lady of Guadalupe Church in Doral, she had heard of the lay missionary group through Andres Novela, a missionary and one of her teachers at Msgr. Edward Pace High School.

Pannunzio said she saw the work that Amor en Accion was doing, and “I really wanted to be a part of that project.”

In the summer of 2018, she went on a mission trip to the Dominican Republic. She described the trip as having its ups and downs, but said she was especially shocked by the anti-Haitian attitude that existed in the communities, even among the youngest — to the point that the children avoided one of the Amor en Accion missionaries who was of Haitian descent.

There was such a taboo that the cook who fed the missionaries during the trip had never even spoken to Haitians. So the group decided to bring her along as a missionary to visit a neighboring batey, where Haitians had established a community.

“She saw that in her 25 years she had been fed this idea of Haitians being mean and aggressive. And then she met the Haitians in the bateys and she completely broke that stereotype that her family was feeding her,” said Pannunzio.

That’s why being a missionary is important, she said. “God uses you as an instrument, and you truly serve him.”

Pannunzio’s testimony helped influence her friend, Orianna Cardoza, another young adult from Our Lady of Guadalupe Church, to go on mission for the first time this summer.

Cardoza noted that mission work gives you a new perspective on life. “It shows you that not necessarily everyone has the things that you take for granted every day. It also helps you strengthen your relationship with God, just because he calls us to serve. Doing this, you’re doing what you’re called to do.” 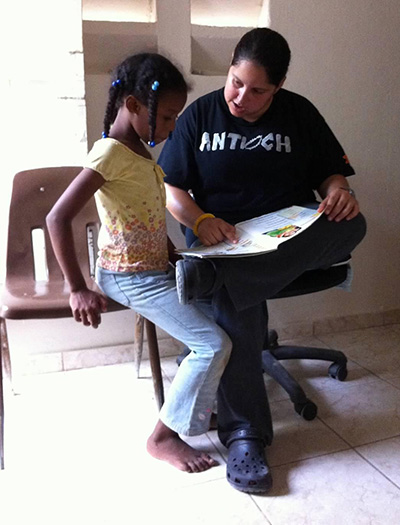 Amor en Accion missionary Jeannette Victoria reads along with a new friend from the Dominican Republic during a mission trip.

Lourdes Victoria said age does not matter when it comes to being a missionary. “As long as you have the will inside to serve, and be ready to say yes,” said the parishioner of St. Mark in Southwest Ranches. This summer, at the age of 74, she went on a mission trip to the Dominican Republic with Amor en Accion.

Victoria said her first experience of missions took place in her native Cuba, when as a teenager she assisted with Holy Week missions in Cienfuegos. Then the communist revolution shut the churches down and she left the island. Her new mission became her family, caring for her husband and children.

“But now that I am a widow, I have fewer responsibilities and that time I can now dedicate to missions,” Victoria said.

Her daughter, Jeannette, is also a missionary. She said her call began when she was a student at Pace High School and her teacher, David Masters, emphasized the need. “It was instilled in us that our call is not just here locally. There is a bigger picture. We are called to go out,” said Jeannette.

In 2012, she went on her first mission, to the Dominican Republic, and said she witnessed how Christ is present in “the other.” She returned there this summer accompanied by her mother.

Although they both enjoy serving on mission trips, Jeannette said she and her mother are conscious that being a missionary is not just about traveling to a different place and helping those in the farthest reaches. It’s bringing and applying those lessons back home.

“It’s how we live our life every day,” said Jeannette. 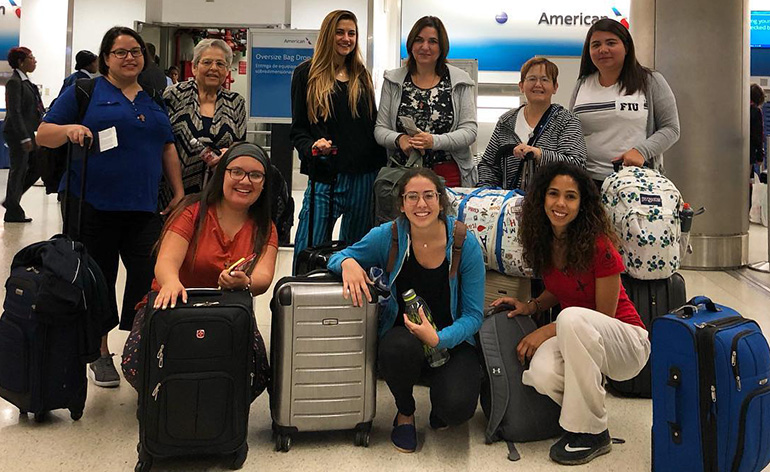 Amor en Accion missionaries gather for a group photo before departing to the Dominican Republic this summer. Among them are mother and daughter duo Jeanette Victoria and her mother, Lourdes Victoria (back row left).

Articles(70)
Our Lady of Guadalupe Church