'I thank God for this ministry'

Screenshot of the top of the home page for Courage International, a Catholic ministry to people with same-sex attraction.

MIAMI | Courage International is the official ministry of the Catholic Church for people with same-sex attraction, and there is a chapter in the Archdiocese of Miami.

In 1980, Cardinal Terence Cooke of New York conceived of a ministry that would assist those with same sex attraction in adhering to the teachings of the Catholic Church on sexuality. The cardinal invited Father John Harvey, of the Oblates of St. Francis de Sales, a 52-year-old moral theologian, to begin the Courage International ministry.

“Father Harvey hadn’t gone looking for this ministry, but it was God calling him,” said a participant at the original support group meeting, which took place at the Seton Shrine in Our Lady of the Rosary Church in lower Manhattan. 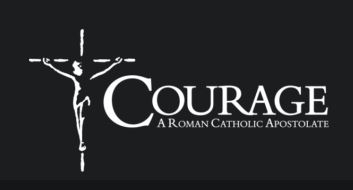 Logo of Courage International, a Catholic ministry to people with same-sex attraction.

Since then, the ministry has established chapters throughout the United States and 13 countries. Group members are inspired by the Gospel’s universal call to holiness and the Church’s teachings about the goodness and purpose of human sexuality. Through this apostolate, participants receive pastoral support in the form of spiritual guidance, prayers, friendship and fellowship.

“I thank God for this ministry,” said one participant at a recent meeting in the Archdiocese of Miami.

The five goals of Courage are chastity, frequent attendance at Mass and receiving Communion, fellowship, support for others and giving good example. The ministry is based on the 12-step program in order to focus efforts on growth in self-understanding and holiness.

Meetings are in parishes and begin with prayer, then a talk or spiritual reading, followed by discussion about positive or negative personal events that could impact chastity. Members are pledged to confidentiality.

“I attend Mass, receive the sacraments, go to church events, but feel left out of the mainstream. I feel isolation and hopelessness. Meetings are the only place where we can discuss how we feel in the Church,” said one participant.

Having same sex attraction was not a choice, participants at a recent archdiocesan meeting agreed.

“If given a ‘choice’ I surely would have chosen to be heterosexual, to be married to a member of the opposite sex, to have children and a family,” said one participant. “I suppose this is our cross to bear. I think God has given those experiencing same sex attraction an ability to grow in holiness.”

The ministry frowns on using the word gay, which infers the totality of a person’s essence. One’s sexual orientation is only a part of a person’s nature. Members at a recent meeting said they dislike the stereotypes of same sex attraction.

“The ministry makes me aware that I am not alone, and I need to keep my eyes on the prize-of Heaven,” said one member.

Courage participants at a recent meeting said they are as saddened by the sex scandals as other Catholics, and believe Courage could be part of the Church’s renewal.

Father Harvey died in 2010. The current director of Courage International is Father Philip Bochanski, who was the Courage chaplain in Philadelphia. Florida has chapters in Fort Lauderdale, St. Petersburg and Jacksonville. Some chapters are in need of a chaplain. Priests who are interested in serving as Courage chaplains may call Father Bochanski at 203-803-1564.

For information on the Archdiocese of Miami chapter call 571-294-5933. Courage is also available for online support by going to https://couragerc.org/groups/.