'A president is a diplomat'

MIAMI SHORES | To hear both sides, it's a match better than any on a dating website.

Mike Allen was seeking a school that blended education and diversity. And Barry University wanted a seasoned educator who shared the values — fundraising, student engagement, cultural sensitivity — of the Adrian Dominican Sisters who founded it.

They both got what they wanted this year as Allen was named president of Barry, after a six-month search that considered 45 candidates.

Here's Greg Greene, who chaired the committee that chose Allen: "To me, he was the obvious choice. Mike had the skills, the great cultural fit and the vision to take us to where we want to go. And now that he's here, I feel it 10 times stronger." 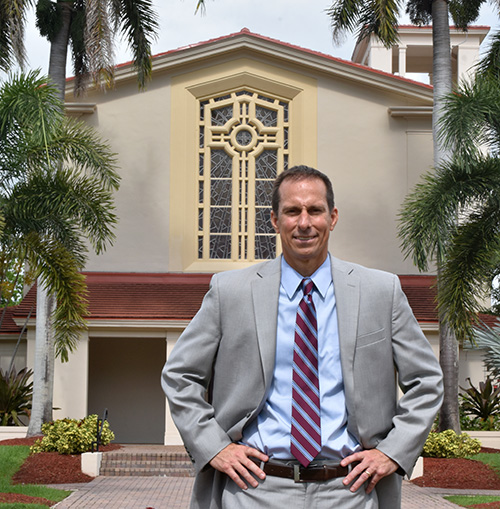 Mike Allen pauses outside the Cor Jesu Chapel at Barry University, where he was chosen this year as its new president.

And here's Allen during a recent interview in his new office: "I wanted the opportunity to be a university president, but it couldn't be just any university. Barry is both a personal fit and a professional fit."

With Allen, 49, Barry is getting an educational veteran with more than 25 years of experience. Fourteen of those years were at the Washington, D.C.-based Catholic University of America, first as director of athletics, then as vice president of student affairs.

The presidency at Barry puts him in charge of a main campus with 7,500 students from more than 80 countries. Its two colleges and six schools teach business, law, education, nursing, psychology, social work, podiatry and other disciplines. The university also has a law school in Orlando and education classes in the Bahamas.

As its first male president and its first layperson, Allen's appointment marks a sizable shift for Barry. He spoke with respect, even reverence, for previous presidents including Sister Linda Bevilacqua, who retired in July after serving since 2004; and her predecessor, Sister Jeanne O'Laughlin, who died this past June after nearly three decades at Barry.

A LIFE IN EDUCATION

Allen said he realizes the delicate balance needed: upholding the university's heritage while developing and adapting it to future needs.

"My values are their values," Allen said. "So I'll continue to be thoughtful and respectful. But my role is to take the university further. I hope people will like the combination."

In a way, Allen seems to have been born and bred for a life in education. Living in Connecticut for his first 32 years, he was raised by two teachers. His father was a professor of clinical psychology for 40 years at the University of Connecticut. His mother was a special education teacher for 30 years, teaching fifth and sixth grades. He remembers his parents bringing him to campus during class times.

Allen earned a bachelor's degree in sociology at Trinity College, Hartford, where he also co-captained the basketball team. Then he earned master's and doctor's degrees from the School of Education at the University of Connecticut. That university also gave Allen his first job, running an academic support program for students — from an office just two buildings from where his father taught.

He moved to Florida in 2002, where he built and ran a similar program at Florida Atlantic University. During his three years at FAU, he fell in love with the "diversity, vibrancy and culture of South Florida," he said. "It makes a great experience for students."

The Allens literally adopted South Florida's diversity as he and his wife, Beth, adopted two children of color: Maya, now 15, and James, 13. A "trans-racial family," he terms it.

Catholic University hired him in 2005, and the family moved to Silver Spring, Maryland. There, Allen distinguished himself first as vice president and director of athletics, with 24 teams of the CUA Cardinals winning conference championships and excelling in NCAA tournaments.

After eight years, Allen was promoted to vice president of student affairs. Among his achievements were new centers for career success and "cultural engagement," to encourage participation of minority students. He also landed several multimillion-dollar donations.

His rise at CUA was atypical, remarked university president John Garvey. Usually, vice presidents are former provosts or other academicians, not athletic directors.

"But I was impressed with what he did there," Garvey said in a phone interview. And his admiration was rewarded: In his new post for student life, "Michael was incredibly successful."

How successful? Well, he talked CUA into starting building projects for a $2 million dining hall, athletic facility upgrades for $25 million, and two new residence halls for $35 million. All of it backed by studies and promoted with persuasion on how good it would be for everyone.

"He always framed things in terms of the overall health of the university," Garvey said. "He contributed to a nice cooperative culture, among people who sometimes competed for scarce resources — but keeping the university's best interests in mind. And he did it with infallible good humor, always with a smile. You were always glad to be in his presence. I think he'll be a great president for Barry."

Although Allen's new university held an informal meet 'n' greet with him and his family in mid-March, he will be officially inaugurated and installed as president on Nov. 13 during annual Founders' Week festivities.

The Allens have already found a house in Miami Shores, and begun to explore their new hometown. "It's different even from Boca Raton," he said. "We're always finding a new shop or restaurant. It has the qualities of a small community and a big city."

He plans a lengthy learning period to get acquainted with Barry, its staff and faculty, and its various programs. He sees it as an exchange: getting to know those he'll work with, while rallying people behind his leadership.

Garvey's view of Allen is spot-on with his own self-assessment. When asked how he sees his new role, Allen answered: "A president is a diplomat, building a sense of empathy, understanding what's important to each group, bringing them together for unified goals. Our priority will always be the students and the outcomes for them. But the faculty and staff will need resources to do their job."

He has already chosen a theme for his first year: "Changing Lives for a Greater Tomorrow." He explained: "Most of our students are first generation. They're going to change their families' lives. And they’ll go out and make the world a better place."

Because of his emphasis on promoting a vision, he has sought out feedback via Facebook, Twitter, Instagram and LinkedIn. He also posted a brief video introducing himself and boosting the university. The video not only boasts of Barry's academic programs, but of graduates who fight for immigrants, the environment and other social causes.

Fundraising will get a lot of attention from Allen, who said higher education is undergoing a "seismic shift," with costs falling for students but rising for administration.

He plans to "take our show on the road" to ask support from Barry's 65,000 alumni. That would include dinners, receptions and speeches in cities like Boston, Atlanta and New York.

"We need to tell our story to a broader audience," he said. "We need to build relationships and (offer) big ideas. Things that resonate with people and companies that have philanthropic interests."

Sports, too, will get his interest, as they did at CUA and the University of Connecticut. He voiced pride that Barry won three national championships in their division this year.

"Some people say that sports is the front porch for universities," Allen said. 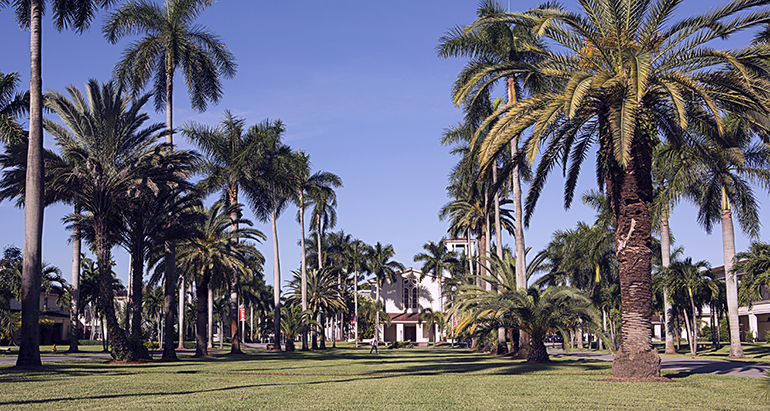 View of the mall at Barry University, with the Cor Jesu Chapel in the background.