At 3,000 graduates and counting, office recalls early days, renews call to all the baptized' 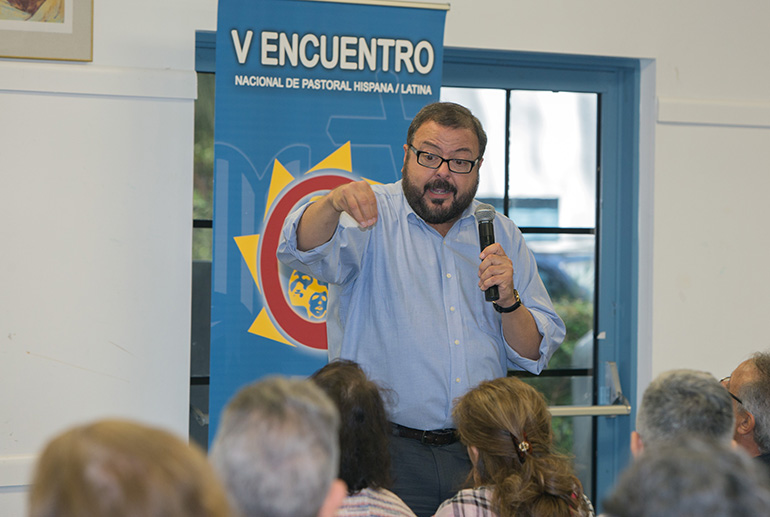 Guillermo Fernandez Toledo speaks on the figure of the laity in the history of the Church during the Office of Lay Ministry's Enrichment Day 2017 and 40th anniversary celebration, at the Southeast Pastoral Institute April 29.

MIAMI | In 1977, the Archdiocese of Miami became the first in the nation to establish an Office of Lay Ministry. Its goal: to form and commission lay people to answer their baptismal call to service in their churches and communities. Forty years later, the office celebrated that call to faithful action at its annual Enrichment Day, held on the grounds of SEPI, the Southeast Pastoral Institute in Miami.

The April 29 event featured a recognition of the pioneer directors and students of the office. The nearly 200 participants included many of the approximately 200 current students in the School of Lay Ministry and some of its 3,000 graduates. 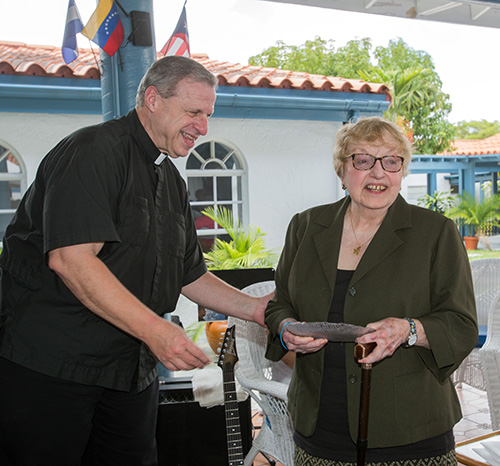 Msgr. Pablo Navarro presents Zoila Diaz, the second director of the Lay Ministry Office, with a token of recognition for her years of service. 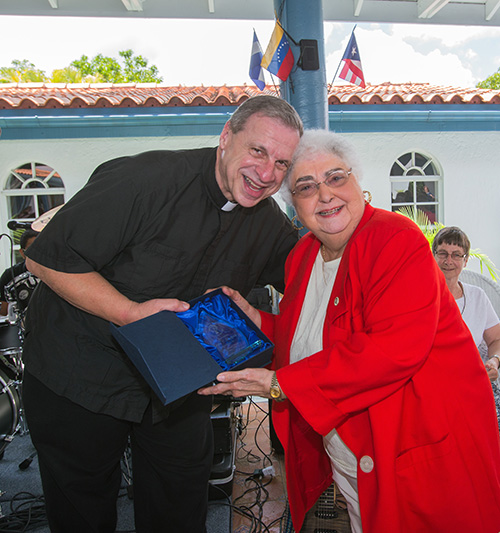 Msgr. Pablo Navarro poses for a photo with Leyla Mazpule, who received a glass flame for being the longest serving lay minister. She is from the original School of Ministry class that graduated in 1979.

Among them was Alfredo Romagosa, who stepped up to answer Edward McCarthy’s call in the late 1970s. He joined the second School of Ministry class, where he discovered his vocation to teaching and went on to earn a master’s degree in religious studies at Barry University. An engineer by profession, he has volunteered in the School of Ministry ever since, teaching Scripture, Church and social justice â and continually learning himself.

“Archbishop McCarthy was a great believer in lay participation in the ministry,” Romagosa said. “He’s the one who basically changed things. And he believed in being prepared. He wanted to encourage everybody to go through this program.”

He added that he gains tremendous satisfaction from his teaching ministry. “You are planting seeds in people you work with. You see them years later working in ministry and being good at it.”

“It’s a day in which we are recognizing the pillars and how we continue their work. We are grateful for the people who have said yes all these years,” Gonzalez said.

Sister Ann, the third director from 1996 to 2008, recalled how she was first invited to teach a class where she drew upon the bishops’ pastoral letter “Gifted and Called.” She created her own acronym, CHAMP: C is being called to community, h to holiness, a to adulthood, m to ministry and p to prayer.

“In order to be a champ you have to exercise. If you don’t use it you lose it. Without we are nothing and our ministry is nothing,” she said. “We all put the mission of the Office of Lay Ministry in one sentence: to call forth the gifts of the laity and empower them in their ministry.”

She compared the director’s role to a conductor and called lay ministers “the orchestra. You are called to share your gifts with those you meet every day, 24-hours a day, seven days a week.”

The office’s second director, Zoila Diaz, said that it had been Archbishop McCarthy’s dream as a seminarian “to have a laity informed and formed and to take their rightful place in the Church as ministers.”

She praised the leadership of Scopetta, who left a successful career as a psychologist to co-found the ministry. As soon as an initial ad was placed, some 200 people signed up and the ministry took off. Scopetta asked her to come on board as director but Diaz said she remained skeptical, thinking how “at that time lay people were not in these positions in the archdiocese.”

Diaz also praised the work of the late Adele Gonzalez, who joined in 1979. She taught, wrote the bilingual formation program and infused energy and creativity into the ministry, despite suffering from rheumatoid arthritis. She served as assistant director until 2004. 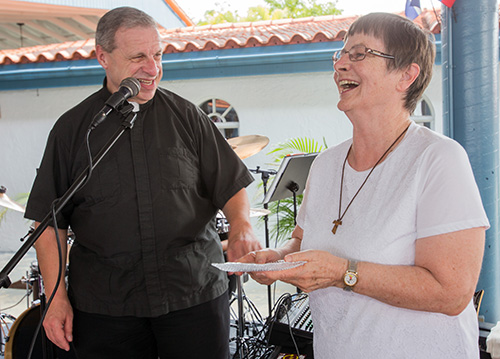 Msgr. Pablo Navarro shares a laugh with Franciscan Sister Ann McDermott, the third director of the Office of Lay Ministry, who received a token of recognition for her years of service. 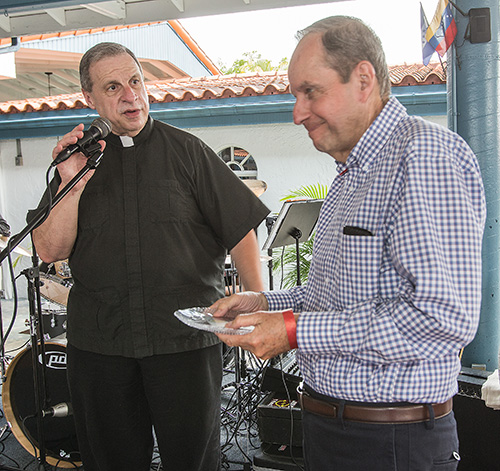 Msgr. Pablo Navarro presents a token of recognition to Alfredo Romagosa, a member of the School of Ministry's first graduating class in 1979. He and his wife, Margarita Romagosa, have been collaborators in the Office of Lay Ministry ever since.

Msgr. Pablo Navarro, pastor of St. John Neumann Church in Miami, said that when Pope John Paul II visited here in 1987, the archdiocese was already known for energetic lay ministry. He believes that “seeds were planted” here for his 1993 encyclical on evangelization.

In a workshop, Msgr. Navarro challenged the faithful to minister through each breath of life, quoting Pope Paul VI that the church’s “greatest vocation” is to evangelize. And the mission field is ripe for harvest, as the 2010 census reported 4.25 million Catholics in South Florida while less than 1.5 million are registered.

“God can do a lot with a little. He expects us to be faithful and fruitful,” Msgr. Navarro said.

He alluded to “all those people you meet at work, school, in the marketplace who tell you they’re Catholic” but have no idea about Church teachings or practice.

“They have no idea but they are good and they mean well and when children come they want them baptized,” Msgr. Navarro said. “How often do we give up because we feel we can’t take care of everyone? No, we take care of the one who is in front of us, that is the one who God has placed.”

He added that, at his parish, he doesn’t need passive “pew warmers” but active participants in ministry â and not just commissioned lay ministers. He advised laity to find a ministry they love and to serve authentically, with deep love, and compassion rather than arrogance.

“You as lay ministers are commissioned to serve in the stead of Jesus, to serve as Jesus would serve,” he said. “How do we make Christ present at all times?”

Ministry student Nicole Chin said she is deepen her faith and serve in Christ’s name at Our Lady of Lourdes Church in Kendall. “I’m reading so much, I’m reading the Bible so much. I want to learn and grow and learn more about God and Jesus. It’s great.”

Graduate Regina Maldonado serves as an usher and takes Communion to the sick. She beamed at having experienced healing from cancer and other conditions. “Now I’m 99 percent well and I can continue to serveâ¦ You have to know Jesus in your heart. Without Jesus, without God, I wouldn’t be here,” she reflected. “It’s the most beautiful ministry.”

Director Gonzalez noted that every lay person has a responsibility to learn more about the faith.

“The call is for everyone,” she said. “It’s a blessing to have this program to learn more about the faith, and also the vision of the Church, how we as laity are called not only to work in our parishes but also to be the salt and light of the earth and the light of the world.”