Hundreds helped to apply for citizenship 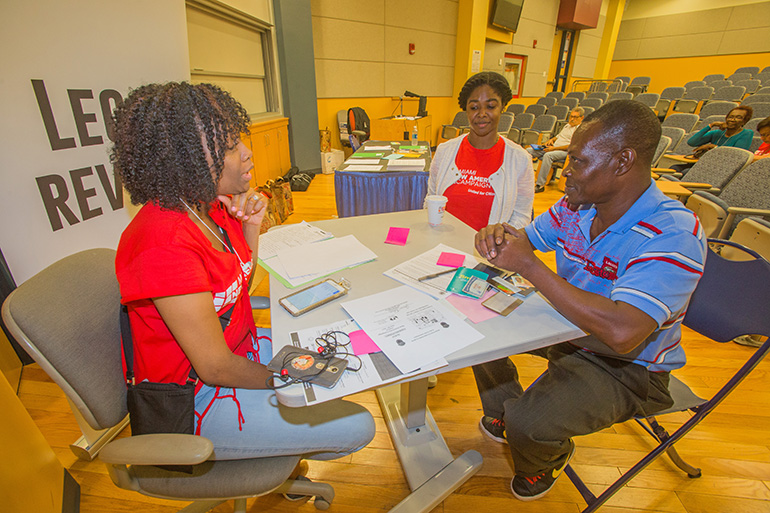 The clinic was part of the nationwide New Americans Campaign, with which Catholic Legal Services is affiliated. The agency provided attorneys and volunteers at three of the 14 locations where this year’s multisite “mega event” took place. Other organizations taking part, in locations from Homestead to Miramar, were the Florida Immigrant Coalition, Hispanic Unity, International Rescue Committee and AILA (American Immigration Lawyers Association).

“My wife and I want to become citizens,” Jude Appolon said as he sat in front of a computer in an MDC computer lab. His wife and two children stood behind him. “The United States provides you with many opportunities to work and go to school.” 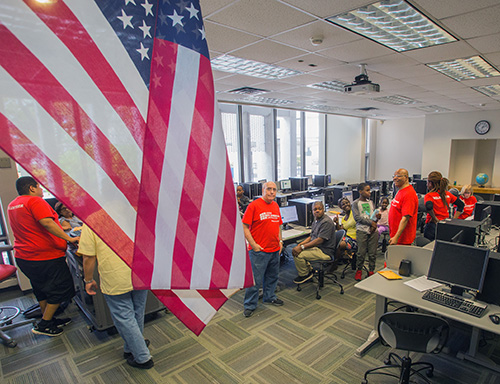 Mary Appolon was hurt in the 2010 earthquake and received temporary protected status in the U.S. The couple are now permanent residents. Their five-year-old daughter was born here. Their 10-year-old son was born in Haiti.

TPS for Haitians was recently extended by the Department of Homeland Security, but only through January 2018.

The Appolons are both in school. Mary graduated from Miami Dade College and now studies business administration at Florida International University. Jude is studying social work at MDC North. He found out about the free clinic from flyers he saw posted at the school. Once parents become citizens, their children can easily do so as derivatives of their parents.

Last year, the New Americans mega citizenship event took place at a single location, Marlins Park. Organizers hoped that having multiple sites in various neighborhoods would make it easier for those seeking citizenship to attend.

"This is the first time it's this big, 14 clinics, more than 12 organizations, more than 600 volunteers," said María Rodríguez, executive director of the Florida Immigrant Coalition.

Cassandra Suprin, a supervising attorney at CLS, and Tanya Dwyer, an attorney, were among 50 volunteers helping those seeking citizenship at the MDC North clinic. They were reviewing Paul Pierre’s documents to see if he was eligible to apply.

Those found eligible received help in completing the N-400 form required by the U.S. Customs and Immigration Service. Along with the form, applicants need to get fingerprinted and pay a $725 fee. Then they receive an appointment date for an in-person interview, where they will be asked 10 U.S. civics questions from a list of 100. They will also be required to write and read a sentence in English. If they pass the test, they are invited to a ceremony where they will take the oath of citizenship and receive a certificate proving their new status, Mezadieu said.

She noted that applicants with learning or memory problems, some medical conditions, struggles learning English, or who cannot read or write, can receive a waiver from the citizenship exam.

As part of the screening, Suprin gave Pierre a sample from the civics test.

“How many senators are there in Congress?” asked Suprin.

However, he realized he needed to study more when he couldn’t name one American Indian tribe. His wife is already a citizen. His son is a permanent resident and MDC North student.

Oni Frye, a home health care worker at Family Life Care Services, brought a carload of clients and fellow workers to the clinic. She, too, attends MDC North and learned about the clinic from flyers.

“I love to help people,” she said. “If more people knew about this event more people would come.”

Mezadieu said that CLS gives presentations at some archdiocesan churches, among them St. Clement in Fort Lauderdale, Notre Dame d’Haiti in Miami and Sacred Heart in Homestead.

“We’re here to support their rights,” she said. “Some people don’t know what kind of immigration relief they have. We tell people who are undocumented how to behave if approached by a police officer. We tell them don’t drive without a driver’s license. We tell them they have a right to an attorney,” she said.

Citizenship provides many benefits, said Rodríguez, aside from allowing people to exercise their right to vote and participate fully in society. She cited a study that found it raises a family’s income by 8 to 11 percent due to increased economic opportunities, such as employment with government, obtaining government contracts, and accessing scholarships.

Finally, “citizenship is the best protection against deportation, because let’s remember that permanent residents also can be deported,” Rodríguez emphasized.

For more information about the New Americans campaign, go to www.miaminac.org.

Rocío Granados of La Voz Católica contributed to this report.