On its 60th, St. Matthew consecrates its altar

Rendering of a new entrance for St. Matthew Church is on display in the church during the parish's 60th anniversary celebration.

Archbishop Thomas Wenski pours oil of chrism on St. Matthew Church's new altar as he consecrates it during the parish's 60th anniversary Mass.

From left, Raquel Padron, Marcela Garcia and Samantha Salas bring up the offertory at St. Matthew Church during the parish's 60th anniversary Mass.

Members of the congregation pray during the Mass marking the 60th anniversary of St. Matthew Parish.

HALLANDALE BEACH | As a fitting 60th birthday gift to St. Matthew Parish, Father Robert Ayala, pastor, made some small changes to the church, including the altar, which he discovered had never been formally consecrated.

“I told you this would be more than an anniversary celebration,” Father Ayala told parishioners at the Mass Sept. 25. “We don’t always get to see such a beautiful blessing. Thank you to my brothers in the priesthood who helped me with this service.” 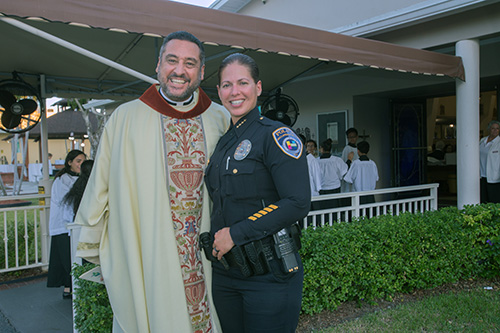 As part of the altar dedication, Archbishop Thomas Wenski spread sacred chrism oil on the entire surface of the altar. An altar server placed charcoals on the altar’s four corners and center, then the archbishop placed fragrant incense on the charcoals, for the prayers of the faithful to rise to heaven. Father Ayala’s parents covered the altar with a new altar cloth. Archbishop Wenski then instructed Deacon Ian Taylor to light candles at each corner of the altar.

“As we dedicate this altar and set it apart for God’s service, let us also rededicate ourselves as individuals and as a Catholic parish community to work together for God’s kingdom as missionary disciples,” Archbishop Wenski said. “This altar is like the threshold of a door. The door is Christ. Through this threshold we pass over from the mundane to the sacred.”

The archbishop told the congregation that St. Matthew, the patron saint of the Hallandale Beach parish, was a tax collector employed by the hated Romans. Matthew was transformed after an encounter with Jesus. 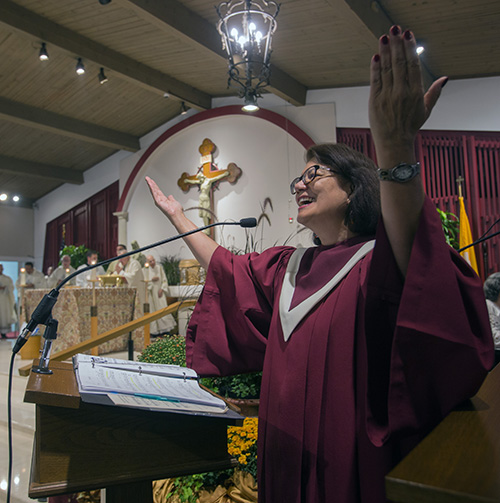 “Matthew became an apostle and an evangelist,” he said. “In Matthew, we see that every saint has a past and every sinner has a future.”

Miami’s first bishop, Coleman Carroll, appointed Father John A. Skehan to be the first pastor of the newly-established parish in March 1959. A former pastor recalled that the area around the church was a swampy field infested with land crabs when Bishop Carroll broke ground for the new church in the Golden Isles development of Hallandale Beach in 1960. Hallandale Beach Boulevard was a dirt road.

The parish acquired a duplex to serve as a rectory for the priests and house parish offices. A carport attached to the house was enclosed and served as a chapel for daily Masses. Sunday Masses were celebrated in the Hallandale Recreation Center and then in the Plantation Restaurant. In March 1961, Bishop Carroll dedicated St. Matthew Church. The building was constructed as an L-shaped structure with a church seating capacity of 500. The other part was for a school with four classrooms and folding doors that could be opened to accommodate the overflow of parishioners at Sunday Masses, especially during tourist season. 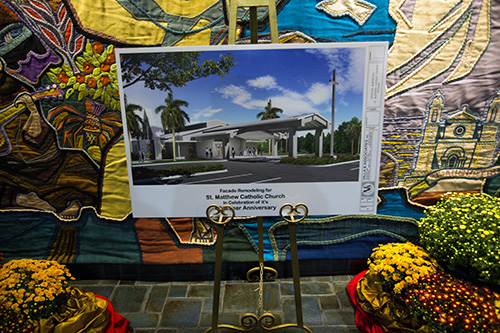 Rendering of a new entrance for St. Matthew Church is on display in the church during the parish's 60th anniversary celebration.

In September 1961, St. Matthew School opened with an enrollment of 110 students in kindergarten through fourth grade. Grades five, six, seven and eight were added later. Lay teachers and Sisters of St. Catherine de Ricci, Ursuline Sisters from Cincinnati, Ohio, and Sisters of the Apostolate of the Sacred Heart from Cuba staffed the school. The school closed in 1984 because of low enrollment. The convent was converted into a rectory and parish offices, and the school became the parish hall.

A remodeling of the church facade, now covered with a canopy, is planned for the near future.

Updated Oct. 8, 2019: Father Dan Kubala had been inadvertently omitted as one of the former pastors. 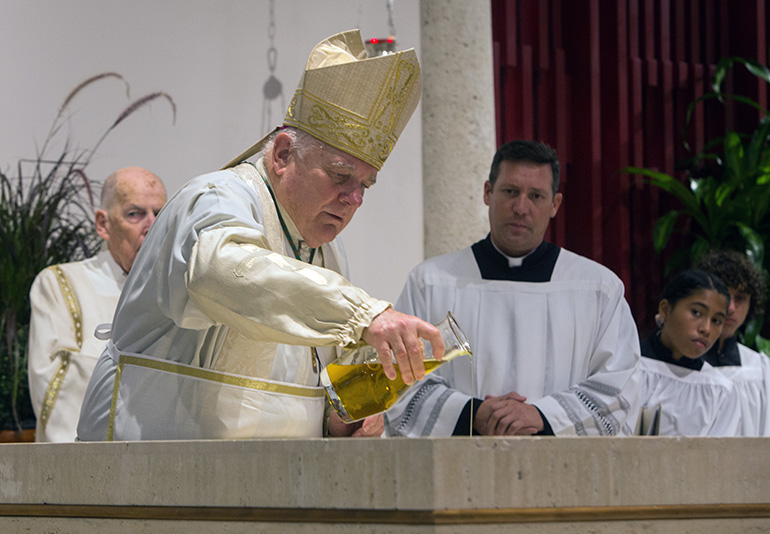 Other News from St. Matthew Church

Wednesday, 25 Sep 2019
Every Mass is an encounter with Jesus and his mercy