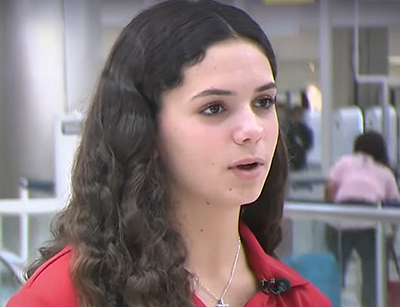 FORT LAUDERDALE | Avery Patton is out to fix a problem she didn't cause: a lack of opportunities to honor war heroes.

But enrollment has lately plummeted, leaving the all-volunteer organization short on spots for future flights. That's where Avery, a freshman at Cardinal Gibbons High School, comes in.

Working with fellow students and local politicians, she is helping to scour the community and fill those vacant plane seats. She thinks the veterans simply don’t expect to be honored.

“So much, everyone appreciates them, and they don’t really get that,” she told Channel 10 News.

Honor Flight has filled planes for its next four trips to the nation’s capital, but the wait list after that is empty. So the outreach by Avery and fellow students is needed.

“We are proud of Avery and the service she is giving to our military heroes,” said Kristin Hanke, director of development at Cardinal Gibbons High.