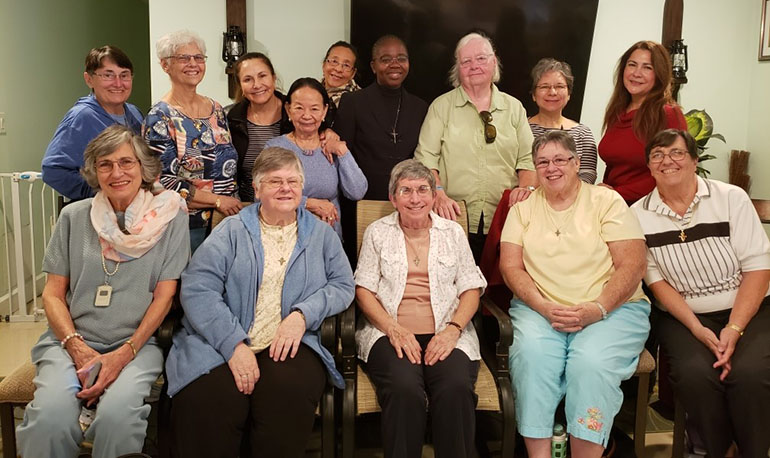 MIAMI | Amid early 20th century business tycoons, land speculators and confirmed sun-seekers, the Franciscan Sisters of Allegany migrated southward to the Miami swamplands in 1927 on a medical mission — another in the longstanding chain of connections between Floridians and New Yorkers.

Irish native Mother Alice and five other Franciscans of Allegany, New York, arrived in Miami Beach to run the Allison Hospital started by Indianapolis industrialist James Allison, which was renamed St. Francis Hospital. Then in 1934 the pioneers established St. Joseph Hospital in Tampa and, from 1947 through 1991, ran Corpus Christi School of Miami.

St. Francis provided compassionate medical care for decades — including to more than 15,000 Cuban exiles in the 1960s — until its closure in 1992, when its rooftop cross was transported to Mercy Hospital. Continuing that legacy, Allegany Franciscan Ministries helps the poor access health care in Miami-Dade, Martin and Palm Beach counties.

Corpus Christi Church celebrated a farewell Mass in December for the last two Allegany Franciscans in Miami: Sister Lucy Cardet and Sister Michele Dolyk. They then quietly packed and drove north to Allegany, where the order was founded in 1859.

Over the years, up to 90 sisters worked at Corpus Christi or at the hospital, according to Sister Lucy. “To please God, we’ve done what was ours to do, and it has been a benefit to the people,” she said.

Speaking by phone from the motherhouse, some of the sisters reflected on the Franciscan values that guided their Miami work.

Bonnie Bowne-Peters, a St. Francis nurse for more than 20 years, affirmed that it had been the “go-to” hospital for locals, celebrities and tourists. There she learned servant leadership, which she used at three other hospitals as chief nursing officer.

Franciscan Sisters of Allegany and some of their Miami Associates pose after the farewell Mass celebrated for them at Corpus Christi Church in Wynwood, where up to 90 sisters served over the years. Pictured in front, from left: Sister Lucy Cardet, Sister Michele Dolyk, and associate Marcia Gill. Back row, from left: associates Elysee Manshia, Pat Fairfield and Ella Pulido.

“The sisters created a legacy of caring not only for each other and the associates, the employees, but it all trickled down to the patient, who was clearly the most important part of the hospital,” she said. “That hospital provided the best nursing care of any hospital I’ve ever been associated with.”

Franciscan Associate and former St. Francis nurse Carol Lang agreed. Everybody received the same quality of care, from the homeless to Frank Sinatra, she recalled. “My coworkers were my extended family, and I just loved my patients.”

Sister Lucy, 77, attended Corpus Christi, then staffed by up to 20 Franciscans. After joining the community in 1961 and serving in the Northeast, she returned to Miami in 1982 to serve a decade as principal at Corpus Christi. Although the school closed in the 2000s, the parish still thrives.

The school had kids from about 30 countries, Sister Lucy recalled. “This is the body of Christ, the brothers and sisters together, and this was the spirit of the school.”

She also worked as an academic advisor over 20 years at Barry University. She and Sister Michele later served at St. Rose of Lima Church in Miami Shores, where sisters Josephine Streva and Colleen Brady also ministered.

“Franciscan spirituality has to do with the example of St. Francis and St. Clare of Assisi, but also this whole sense of trying to follow Jesus,” Sister Lucy said. “It’s always a sense of openness to people and also just trying to live the Gospel, but not just with a select few. Our charism is trying to be a sister to whomever and share what God has given us.”

Childhood friend and schoolmate Marcia Gill worked as a nurse’s aide in high school at St. Francis, wrapping instruments and feeding babies. She joined the Franciscans and lived at the hospital while earning a nursing degree at Barry before moving to Tampa to work at St. Joseph’s.

She eventually left the order and married but returned as an associate after her husband’s death. She now helps to grow and coordinate the monthly Franciscan Associates spiritual meetings, believing the COVID-19 pandemic is a time for people to pause and ponder their life mission.

Associate Pat Fairfield said she received "life-giving" spiritual support from the sisters. She recalled their service at Corpus Christi.

“It was not as good a neighborhood as it is now,” she said. “There were drug buildings on the same block." The Franciscans, she said, provided "a safe shelter, a safe learning environment for the children.”

Buffalo native Sister Michele, 73, came to Miami over 30 years ago, first serving for over a decade as principal at St. Francis Xavier School in Overtown, opened in 1934 to serve African-Americans and closed in 2009.

She also ministered to the poor including those at Sunnyland Trailer Park, an area then plagued with drugs and gangs. She helped form prayer groups and access services and furniture.

“Many weren’t aware of some of the services for health care, for school, for the children’s food,” she said. "We kind of provided them bridges on how to get help."

She added that residents still call her to tell her what they’re doing now and how they’re helping each other. “So you start to hear a different tone from them, how they’re more independent.”

Sisters Lucy and Michele now join other Miami sisters at the motherhouse, including two who taught Sister Lucy at Corpus Christi. Looking back, they say they’re grateful to have lived the Gospel concretely in Florida through the Franciscan community.

“The hardest part was leaving the people, but we’re grateful we can still keep in touch with them,” Sister Michele said. She also took comfort in knowing that wherever she and her sisters have served, those who remained there could continue to live by Franciscan ideals.

“St. Francis never went into places to work and preach to people to make himself known, and I think that’s the thing about us as Franciscans," she concluded. "It’s not that we’re there to make the Franciscans known, but to make God known.”

Sister Lidia Valli Marian Center School and Services, Inc. - 06/26/2020 04:12 PM
Thank you Sisters for your witness and for your service in Miami. May God bless you!

Dr Joan DiGregorio - 06/25/2020 02:26 PM
Dear Sister Lucy, It was an honor and pleasure to collaborate with you over the years at Barry University. Your commitment to the students was unparalleled and certainly was an exemplar of the true virtues of Catholic Higher Education. After you left Barry, I would like you to know how many of my students in class volunteered their thoughts and feelings about your absence as their Academic Advisor. They missed you very much- as do I. Many thanks to your wonderful Franciscan order for your many contributions in the Lord’s service here in the ADOM! May God bless you all with every grace you may need. I will write to you in New York. Faithfully, Dr Joan M DiGregorio

Maureen Sutton - 06/24/2020 11:25 AM
The Sutton family will always remember our time at Corpus Christi and many of the nuns who taught us. St Rosalina, Mother Lucia, Mother Thomas Rose, St Eucharist. Of course, you can't forget the Priest of our time. Father Glory, Father O'Shea were my favorites. Thank you for the memories.