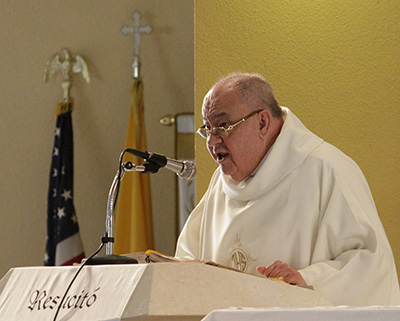 Father Fabio Arango, who lived with Bishop Agustin Roman at the Shrine of Our Lady of Charity for a couple of years, is seen here delivering the homily at the noon Mass the day after the bishop's death in 2012.

MIAMI | Even after losing both legs to diabetes, Father Fabio Arango continued ministering to others: the sick at Mercy Hospital and residents at St. Anne’s Nursing Center, where he himself lived.

“He was well-loved by the patients, even serving as chaplain when wheelchair bound,” recalled Sister Elizabeth Worley, currently chancellor for administration in the archdiocese and previously CEO of Mercy Hospital in Miami.

The Colombia-born priest died Feb. 4 at age 75, after 51 years in the priesthood. He had served in the archdiocese since arriving in South Florida in 1997, where his sole assignment had been as chaplain at Mercy.

“I first met him at Mercy Hospital, when my mother was very gravely ill,” said Father Luis García, pastor of St. Cecilia until 2009. “He was very good to my mom.”

After his mother died, the two lost track of each other. They reconnected again years later at the home of a mutual friend. Father Arango was looking for a place to live. Father García told him, “It’s providential. I have an empty little apartment at St. Cecilia.”

“He was a great companion. He was with me until the last moment when we closed the doors,” Father García recalled, referring to the parish’s closing in 2009. (It reopened in 2011.)

Despite his health problems, “You never knew he had any problems. He didn’t complain about anything,” Father García said. “He was a good companion, a good person. Everybody loved him.” 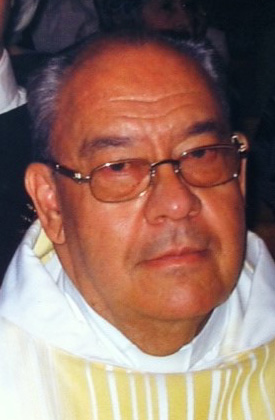 Father García also recalled how Father Arango would constantly collect clothes, especially children’s clothes, to take back to the poor in Colombia whenever he visited. “He carried very little luggage for himself. It was all for the people.”

Dr. Abelardo Arango, a surgeon at Mercy Hospital, said his brother was very appreciative of the care he received in his final years.

“He was very grateful to Mercy Hospital and to the archdiocese and St. Anne’s,” Dr. Arango said, especially Rosemarie Bailey (St. Anne’s executive director) and Cristina Del Portillo, who “was like a guardian angel to him.”

Born July 26, 1942 in Medellín, Father Arango was ordained Nov. 20, 1966 for the Diocese of Pereira. He served there as diocesan treasurer and later as pastor of several churches: Santuario La Inmaculada in Risaralda; Santa Rosa de Lima in Belén de Umbria; La Inmaculada in Viterbo; and La Candelaria in Riosucio.

In addition to his brother, Father Arango is survived by a sister, Julia Margarita Arango, who lives in Medellín; and four nieces and nephews: Julia Kosove, Jeanette Dorfman and David Arango of Miami, and AJ Arango of Colorado.

A viewing will take place Friday, Feb. 9, from 8 to 10 a.m. in the chapel of Our Lady of Guadalupe Church in Doral, followed by the funeral Mass at 10 a.m.