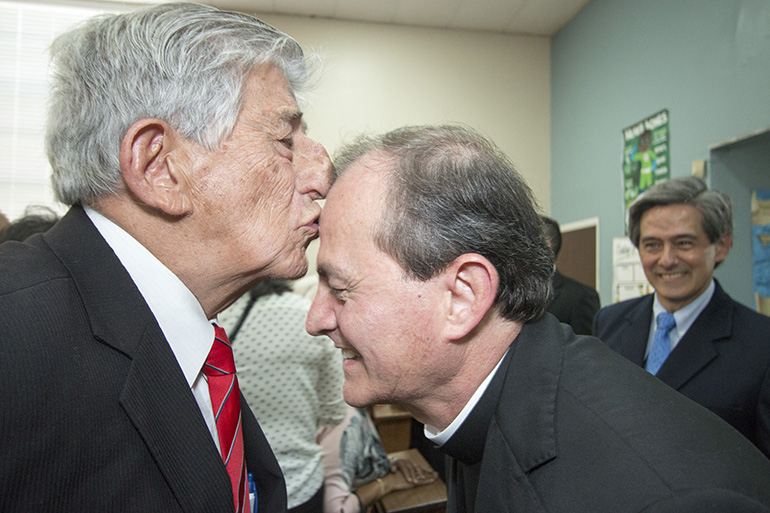 Gabriel de Jesus Agudelo kisses the forehead of his newly-ordained son, Father Oswaldo Agudelo, after the ordination ceremony. Looking on at right is his older brother, Gabriel, who will be ordained a priest for the Diocese of Brooklyn next year.

MIAMI | On his 98th birthday, seated in his wheelchair near the front of St. Mary Cathedral, Luis Rodriguez Iznaga watched his grandson become a priest.

In doing so, Father Luis Pavon answered the call that his maternal grandfather — for whom he is named — thought he heard himself; but “circumstances in the world” at the time kept him from answering.

“When it’s meant to be, it’s meant to be,” said Luisa Pavon, the new priest’s mother, as she awaited the start of the ordination ceremony May 13. Referring to her father, she added, “He said from the start he knew Luis had something holy in him.”

Another grandmother also had predicted her grandson’s future.

“My grandma — on my mom’s side — was always telling us, since Gary was 5, that he would be a priest. And it’s happening. That dream is being fulfilled right now,” said Alexandra De Los Santos, sister of Father Edgardo “Gary” De Los Santos.

“My mom, my dad, my sister, they’re rejoicing in heaven,” she added, referring to the deceased members of the family. She also pictured her grandmother, who died 39 years ago, “telling everybody, ‘I said so.’”

Father Pavon, 35, and Father De Los Santos, 54, are two of the nine men Archbishop Thomas Wenski ordained to the priesthood on the 100th anniversary of the apparitions at Fatima — the largest archdiocesan ordination class in decades.

Their ordination was witnessed by an overflow crowd in the cathedral and thousands more watching via the Internet on the archdiocesan website and Facebook Live. 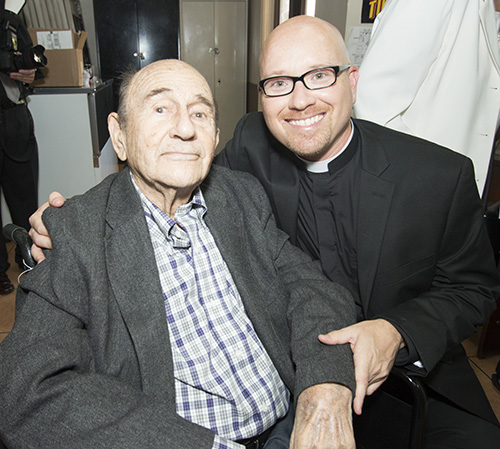 Newly ordained Father Luis Pavon poses with his namesake and grandfather, Luis Rodriguez Iznaga, who was celebrating his 98th birthday the day of his grandson's ordination. The elder Luis had considered the priesthood when he was young, but said life circumstances at the time interfered. Now his grandson will fulfill that dream. 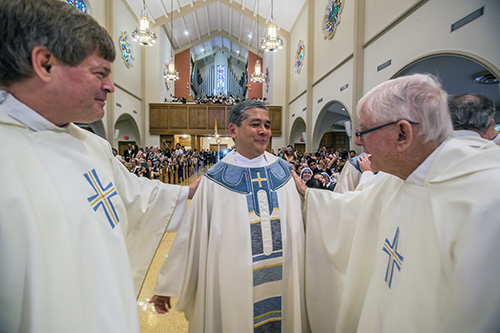 Father Steven O'Hala, left, and Msgr. Seamus Doyle, right, help newly-ordained Father Edgardo "Gary" De Los Santos vest in his priestly robes. "He's the one who started everything," Father De Los Santos said of Msgr. Doyle, his longtime pastor at St. Rose of Lima, Miami Shores. Of Father O'Hala, pastor of St. David in Davie, the new priest said, "I can see myself in him." 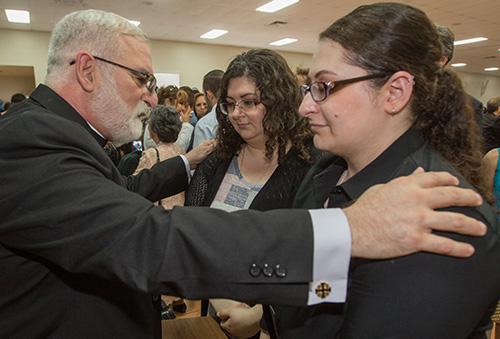 The new priests range in age from 28 to 59. They hail from Guam, the Philippines, Lebanon, Colombia, Peru, and India, as well as Miami. Suffice to say that, for most of them, the road to ordination was paved with detours. (Read their stories here)

Those twists and turns were certainly in the minds of their family members as the day of their ordination arrived.

“It was a miracle of the Blessed Sacrament,” said Paula Beatriz Perdomo de Agudelo, mother of the second-oldest in the group, Father Oswaldo Agudelo, 54.

She and his father, Gabriel de Jesus Agudelo, prayed for years that their second child would leave the globe-trotting life he was living as an executive producer for Telemundo’s 24-hour news channel.

“I asked Jesus in the Blessed Sacrament that he follow in the footsteps of his brother,” said the family’s patriarch. His eldest son, Gabriel, is preparing for ordination next year for the Diocese of Brooklyn.

“This is a real miracle,” said their sister, Beatriz . But Oswaldo didn’t tell the family at first. “He had been in the seminary a year and nobody knew.”

Norma Flores said she had a premonition about her first-born, Father Luis Flores, 41, the day he received his confirmation. His father, Luis Flores, Sr., also had a dream, days before his son told him that he was entering the seminary. In his dream, the family was at dinner, and his son got up, saying, “I’m in a hurry because I have to go say Mass.”

“For it’s an immense happiness that one of my sons will be at the service of the Lord,” said Norma Flores.

In the case of Father Joseph Maalouf, at 59 the oldest in the ordination class, it was his daughters who noticed a change after he attended an Emmaus retreat in 1996.

“It really was night and day. You could tell that something happened to him during that retreat,” said Angie Maalouf, sitting with her sister, Mary Maalouf, and other family members.

Their father began taking a greater interest in church life. He began by volunteering as an usher at their parish, St. John Neumann in Miami, then becoming an extraordinary minister of holy Communion, then a permanent deacon, and finally a priest.

“He’s had a really long path. We’ve supported him and we’re very proud of him,” Angie Maalouf said.

As for having a father who’s a Father, she noted, “I think people are a little bit surprised at first. But they think it’s kind of cool.” 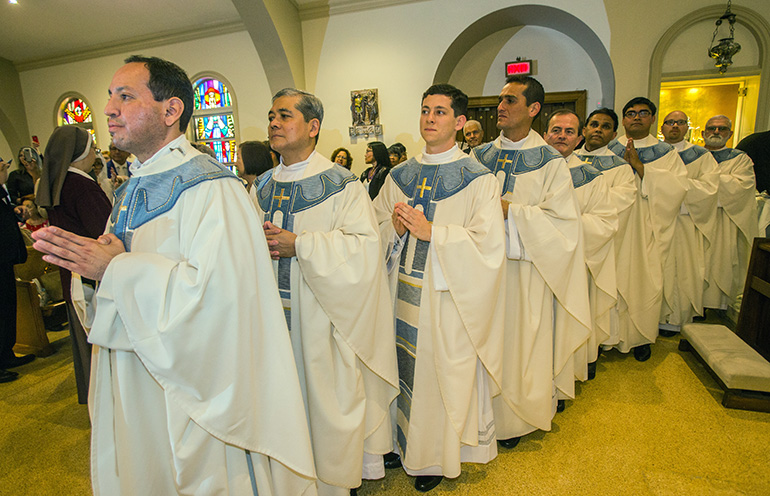