'The children have been very resilient, sharing and talking' 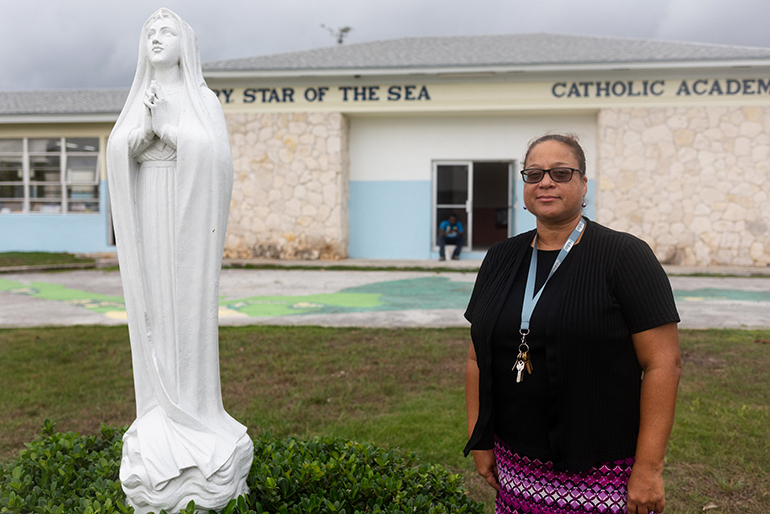 While local public schools had still not reopened a month after Hurricane Dorian, Joye Ritchie-Greene, principal at Mary, Star of the Sea Catholic Academy in Freeport, Grand Bahama, successfully navigated preparations and response to the historic disaster at the Catholic middle and high school. 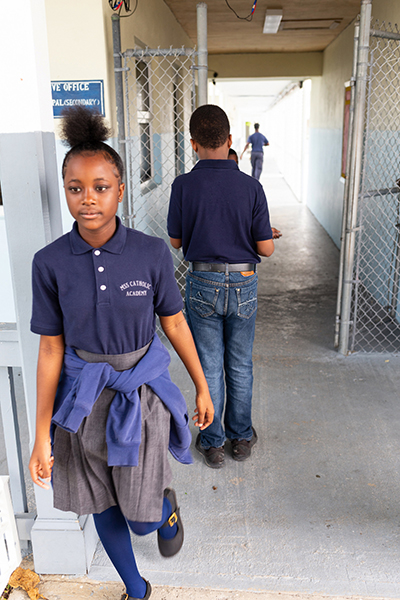 While local public schools had still not reopened a month after Hurricane Dorian, students are back in class at Mary, Star of the Sea Catholic Academy in Freeport, Grand Bahamas. The school leadership successfully navigated preparations and response to the historic disaster at the Catholic middle and high school.

But Mary, Star of the Sea Catholic Academy is back in session with a new daily schedule where students begin and end earlier, and newly-refurbished spaces.

“The private schools are open. We opened first, and that same week a few more opened and there were a few with extensive damage who still opened in the month of September,” said Joye Ritchie-Greene, principal at Mary, Star of the Sea Academy.

Though it suffered storm-surge flooding damage as a result of the early September hurricane, Mary, Star of the Sea Catholic Academy was able to get a jump on post-Dorian renovations with restored electrical power on Sept. 23, based on a provisional agreement with the electric company to begin water-damage repairs immediately, according to Ritchie-Greene. 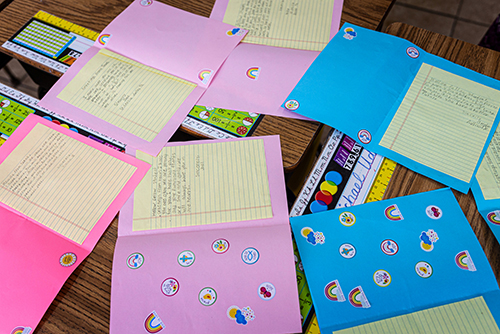 Joye Ritchie-Greene, principal at Mary, Star of the Sea Catholic Academy in Freeport, Grand Bahama, reviews pen-pal letters sent from students at St. Cecilia Catholic School in Dallas, Texas, to the traumatized students in the Bahamas following the historic Hurricane Dorian, which made landfall Sept. 1-3.

The high school portion of Mary, Star resumed classes Sept. 17 from 8:15 a.m. to 1 p.m. The primary school K3 to grade 6 came back a week later. Ritchie-Greene lamented that the Bahamas has lost some residents with children who wish to keep them from falling behind a semester or more of classwork. The enrollment here stands at 329.

Reflecting on the most powerful hurricane to make landfall in the history of the Bahamas, Ritchie-Greene pointed out that hurricane preparedness and lockdown plans are a part of life on the islands, but there has also been a bit of a learning curve in the aftermath of so powerful a storm.

In order to accommodate the many challenges that students' families are facing right now, the school adjusted its schedule to begin and end a little earlier each day to allow parents to deal with other daily challenges. The faculty report that the students are even more productive with the changes.

“The shift in our schedule was originally to accommodate children who didn’t have electricity at home, who didn’t have running water, who were still living with family members and needed extra time to do personal things — but we realized that they were more attentive at school, so the silver lining there was we decided to make that shift,” Ritchie-Greene said.

And while there were no hurricane-related fatalities among the faculty or student body, many have relatives or close friends who did know of such tragedies.

At least three faculty members and some seven or eight student families reported a total loss of their homes and personal possessions. Several have taken some time off, and many took short trips off the island to regroup and come back ready to work. 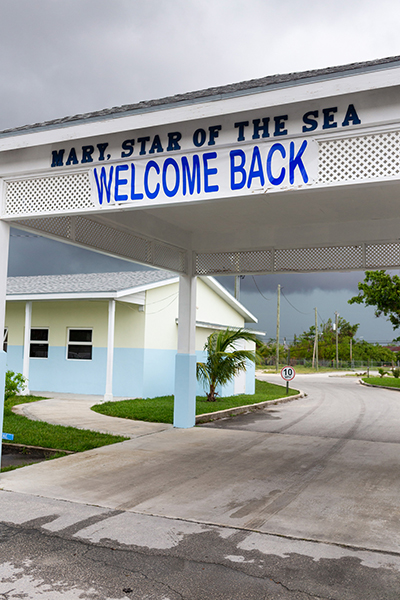 Joye Ritchie-Greene, principal at Mary, Star of the Sea Catholic Academy in Freeport, Grand Bahama, reviews pen-pal letters sent from students at St. Cecilia Catholic School in Dallas, Texas, to the traumatized students in the Bahamas following the historic Hurricane Dorian, which made landfall Sept. 1-3.

“In terms of the social-emotional aspect, we had counselors and psychologists on campus the first two days and we have had counselors speak at our general parent-teacher association meeting last week sharing with parents coping skills for themselves as well as for the children,” Ritchie-Greene.

In addition, three primary teachers attended special training sessions for trauma and have been incorporating what they learned in their music and art classes. When the students came back, they were also greeted by a stack of pen-pal letters from students at St. Cecilia Catholic School in the Archdiocese of Dallas, Texas.

“What we have found is that the children have been very resilient, sharing and talking,” Ritchie-Greene said.

“We thought it would have taken longer for them to settle in but by Thursday of the high school students returning it was as though the storm had not happened: geography was being taught, history was being taught, physics was being taught — teaching and learning was going on and so I was pleased with that sense of normalcy.”

Thinking about lessons learned and silver linings after the Hurricane Dorian experience, Ritchie-Greene said the schools in the Bahamas have very clear hurricane guidelines and staff teams making sure everything is in place.

“You need to have a plan, you need to have members of the team knowing what is expected of them. But once the storm has happened, it also helps if you have persons above you who also know how to manage and act quickly,” she said.

The aftermath of a hurricane forces you to put your life in perspective, Ritchie-Greene said, adding “it really causes us to pause and think about what is most important and there is a somberness to people’s moods (now) and people’s emotions are raw,” she said. “We need to be sensitive to that.”

“I recognize that how I respond to what a parent is saying to me is so important because I recognize that we are just out of a very traumatic experience and people aren’t thinking rationally.”

Mary, Star of the Sea Catholic School was opened in August 1960 at a small house in Amusden Lane in Freeport City, with 20 pupils and three women religious as faculty.