Give, yes, but not clothes

This week, it’s Florida’s neighbors in the Bahamas, who for 36 hours endured the fury of the second most powerful Atlantic hurricane since 1950. Two years ago, it was friends and relatives in Puerto Rico, who had endured the battering of Maria, another Category 5 storm. Nine years ago, it was the ever-suffering Haitian people, hammered by an earthquake that measured 7.0 on the Richter scale.

But emptying our closets of unused clothes and shoes, sweaters and blankets is probably counterproductive, according to experts in disaster relief. Even donating cases of bottled water and paper towels — certainly needed and commendable — may not be the most efficient way to help victims of natural disasters.

“It’s the agencies that are on the ground providing the help, they really know what is needed. So it’s best to give them the resources so they can purchase locally what is needed. It helps to get businesses back up and running locally,” said Peter Routsis-Arroyo, director of the Archdiocese of Miami’s Catholic Charities.

He noted the “tremendous amount of manpower” and agency funds required to organize, pack and ship donated items. “If we had just turned that money over to them, there’s none of those costs involved in that.”

Not to mention that some items may only be needed the first few days.

“Maybe they need MREs (meals ready to eat) for the first two days but that’s it,” he said. Other needs will arise as reconstruction begins, a process that, in places hit as hard as the Bahamas and Puerto Rico, might take years. Those who experienced Andrew in South Dade can attest to that. 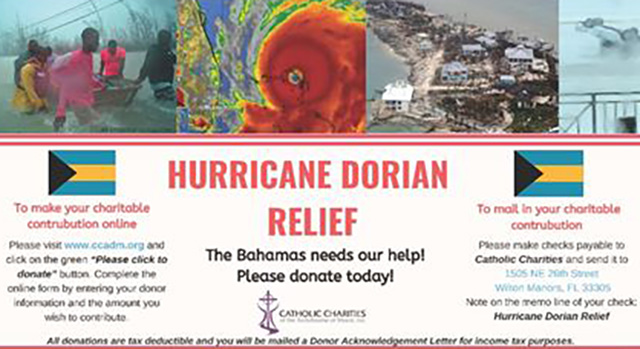 The Catholic Church does have a distinct advantage, though, when disaster strikes anywhere around the world: an interconnected network of churches and agencies with deep roots and deep knowledge of the affected communities. “Boots on the ground,” as they say, and already organized because they’ve been helping people since long before disaster struck, and will continue to do so long after it fades from the headlines.

In the specific case of Dorian’s destructive path through the Bahamas, the Archdiocese of Miami has many links to the Archdiocese of Nassau. Priests from Miami’s Metropolitan Tribunal helped Nassau set up its Tribunal a decade ago. For years, ladies from the Bahamas Women’s Auxiliary have joined members of the Miami Archdiocesan Council of Catholic Women at their annual convention — sometimes bringing Nassau Archbishop Patrick Pinder with them.

“We’ve been in constant contact with Archbishop Pinder,” Routsis-Arroyo said, adding that what he’s dealing with “is overwhelming.”

“He sends us a list of what he needs and it’s easier for us to collect monies, purchase in bulk, not have to pay taxes or anything. And then we have friends of the agency who will ship it for free to him. And then he knows how to get it to whoever he knows on his end,” Routsis-Arroyo said.

Those “friends” include shipping companies and wealthy individuals who offer to cover the costs or deliver the goods free of charge.

Normally, relief work in a foreign country is done by the U.S. bishops’ overseas agency, Catholic Relief Services. But Routsis-Arroyo explained that CRS doesn’t have any offices in the Bahamas “so they work with the archbishop and the local Caritas.”

Caritas is how Catholic Charities are called in many countries. It’s the Latin word for “charity.”

Many people are wary of giving money, however, figuring they won’t know how it’s spent or if it really will go to help the people who need it most. Of course, the same can be said for donated items.

“When you give to Catholic Charities relief, it goes 100 percent to the relief efforts. We don’t take anything for administration,” Routsis-Arroyo said.

He found a bit of a silver lining in the fact that Florida and a lot of the Caribbean islands were spared any damage with Dorian. “So the focus can be on the Bahamas. Lord knows they have to rebuild half their economy now.”