Catholic-Jewish relations: 'Not perfect, but vital'

Archbishop Thomas Wenski, center, answers a question during a panel discussion on Vatican-Israel relations at St. Thomas University. Also on the panel was Rabbi Noam Marans, left, of the American Jewish Committee; and Rabbi Frederick L. Klein of the Rabbinical Association of Greater Miami. The event honored the 25th anniversary of the Holy See's recognition of the Jewish state.

MIAMI GARDENS | A quarter-century ago, the Vatican made history by recognizing the State of Israel — a perfect time for Jews and Catholics to celebrate together.


But they didn’t — not in the Archdiocese of Miami. Instead, leaders of both sides gathered to discuss the significance of the 1993 accord signed by the late Pope John Paul II: what it changed, what it means for both faiths, what should still change.

The archdiocesan observance took place Nov. 21 at St. Thomas University, with Archbishop Thomas Wenski comparing notes with leaders of the American Jewish Committee, cosponsors of the event. And, to emphasize the longtime friendship, the night ended with pastrami and turkey on rye.

"We wanted an educational event," said Roza Pati, head of intercultural and human rights at the university's law school. "It's a time for historical background, but also for the dynamics of interfaith relations. We wanted to explore that." 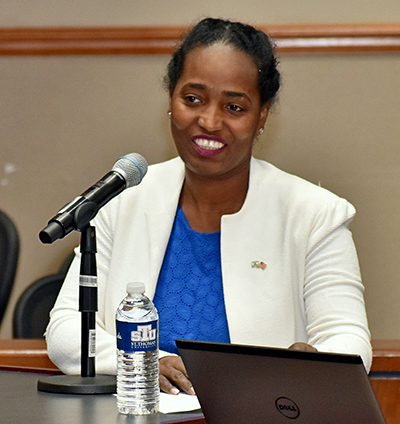 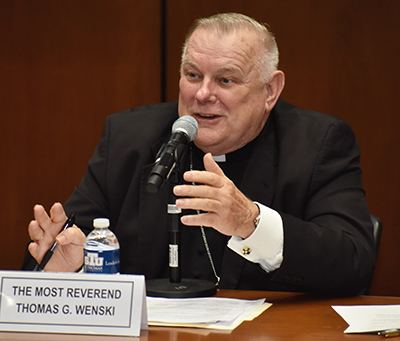 Archbishop Thomas Wenski takes part in a panel discussion on Vatican-Israel relations at St. Thomas University. The event honored the 25th anniversary of the Holy See's recognition of the Jewish state. 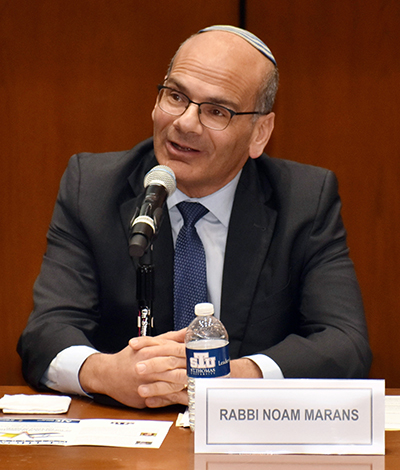 Rabbi Noam Marans, director of interfaith relations for the American Jewish Committee, takes part in a panel discussion on Vatican-Israel relations at St. Thomas University. The event honored the 25th anniversary of the Holy See's recognition of the Jewish state. 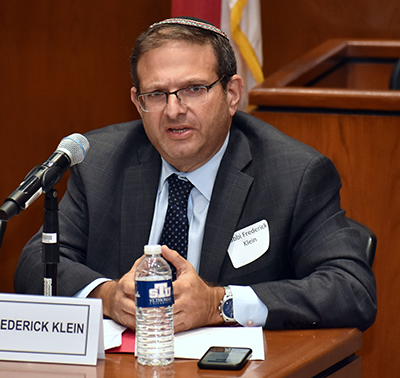 Rabbi Frederick L. Klein, executive vice president of the Rabbinical Association of Greater Miami, takes part in a panel discussion on Vatican-Israel relations at St. Thomas University. The event honored the 25th anniversary of the Holy See's recognition of the Jewish state. 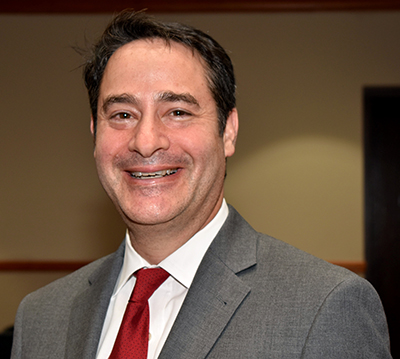 "It's so important to stop and remember seminal moments in history," says Brian D. Siegal, regional director for the American Jewish Committee, after a panel discussion on Vatican-Israel relations at St. Thomas University. The event honored the 25th anniversary of the Holy See's recognition of Jewish state.

The panel discussion drew 200 listeners to the fan-shaped Moot Court at STU. They included not only professors and religious leaders, but about 50 students in law, nursing, economics and human rights.

Kasa Bainesay-Harbor, a deputy consul general for Israel, conveyed greetings from the Miami-based consulate. She said Israel was the only country in the Middle East that supports freedom, democracy and human rights.

"Israel also supports suffering Christian communities," she added. "Israel is the only country in the Middle East with religious freedom."

The panel took the form of a Q&A, with questions from Pati. First question went to Archbishop Wenski: What role did the childhood of Karol Jozef Wojtyla — who would become Pope John Paul II — play in the Vatican's decision to recognize Israel?

The archbishop answered that John Paul's background was "crucial." He said the pope's hometown of Wadowice, Poland, is near Auschwitz, site of an immense Nazi death camp in the 1940s. He said John Paul was the first pontiff to visit a synagogue — in Rome, in 1986. And he mentioned the Holy Father's prayers at the site of Auschwitz in 1979.

His upbringing "gave him insight into the pain of the Jewish community in the light of the Shoah," Archbishop Wenski said, using the Hebrew name for the Holocaust. "He could pray at Auschwitz and name people he knew."

Pati's next question was for Rabbi Noam Marans, director of interfaith and intergroup relationships for AJC: "Why is the Holy See's recognition of the State of Israel... important to the Jewish people?"

Marans replied that the new diplomatic ties conveyed a recognition of both power and responsibility.

"Today, the identification of Jews and Israel is nearly universal," he said. "For 2,000 years, Jews were never a majority in any country. [Israel] is a place where Jews can feel at home, where they are protected. Now, they have the power to make room for others."

That responsibility extends to Catholics in the Holy Land, the rabbi continued. "It requires that all minorities be protected."

Next question was for Rabbi Frederick Klein, executive vice president for the Rabbinical Association of Greater Miami. Pati's question for him: How does the political State of Israel differ from a "spiritual notion of the holiness of the land of Israel?"

Later in the discussion, Klein added that many Israelis wouldn't call themselves religious, yet they observe dates like Passover and the Sabbath. They also make Hanukkah a big holiday, with store sales and music festivals.

"The public square in Israel is thick with Jewish identity," the rabbi said.

What of the Israel-Vatican relationship, then? Klein hailed it as a concrete proof of the Church's attitude toward Jewry, which challenges Jewish attitudes toward the Church.

"We are witnessing a sea change," he said. "The Catholic Church has taken the lead, and it demands a response from the Jewish community. This has become a prime time for dialogue. When we came to Zion, it was a return to history, like any other peoples."

Modern historic questions then entered the panel talk as Pati asked Archbishop Wenski what the Church says on recent policies by the Trump administration: moving the U.S. embassy from Tel Aviv to Jerusalem, accepting Israel's sovereignty over the Golan Heights, softening its view of Israeli settlements on the West Bank. All of those stances are hotly disputed by Palestinians and other Arabs.

The archbishop's reply: "The Vatican values peace and justice for all peoples — a lasting and just peace. Therefore, continued dialogue has continued validity and importance."

Rabbi Klein pointed out that Israel differs with the Vatican on some views toward the Middle East, such as allowing Palestinians to have their own nation.

"The Church has every right to push for a two-state solution, as do many American Jews," Klein said. "The basis for dialogue is a baseline for mutual respect."

Nostra Aetate, the groundbreaking 1967 Vatican II statement on Jewry, didn’t even use the word "Israel," Rabbi Marans pointed out. But it did start a dialogue that led to recognition of Israel — and to continuing talks, he said.

"The genius of Nostra Aetate is that it's not a document on a shelf," said Marans, who visited STU in 2015 to celebrate the 50th anniversary of the document's release. "Catholic and Israeli talks are still ongoing."

He and Archbishop Wenski listed two topics of those ongoing talks: Church property and visas for religious workers. Meanwhile, the archbishop said that every diocese holds regular interfaith meetings.

"When each side can say the other has made an accurate presentation of his faith, we can say that dialogue is successful," Archbishop Wenski said.

As people filed out to a salad-and-sandwich reception in a breezeway, the night got an enthusiastic thumbs-up from Brian Siegal, regional director of the AJC.

"It's so important to stop and remember seminal moments in history," Siegal said. "For American Jews, relations with the Catholic Church loom large. It's not a perfect relationship, but it's a vital relationship, and it's been growing for 55 years. We can set an example for the rest of the world and other faith communities."

Enzo Migliano, a senior in business management, said he learned a lot from the speakers. He said he hadn't known, for one, that Israel's prime minister is not the head of its religious community.

Most tellingly, Migliano said he was unaware that Israel and the Vatican didn’t exchange diplomats before 1994. "I thought they had a relationship since Israel was established as a state."

His friend Gabriel Aguiar, a senior in economics, likewise found the panel talk thought-provoking. "Everything about different communities and international relations, I find interesting," he said.

Erusalem Legesse, studying for a master's degree in forensic accounting, confessed she found some of the material broad and hard to follow. But she said she still valued the program for its historical background.

"It was recommended by my professor," she said. "And it was worth it."

Her friend Suany Gonzalez, a fellow master's student, may have given the most sweeping appraisal of the event.

"It's remarkable that we can be in the same place, no matter if we're Catholic or Jewish," Gonzalez said. "We can sit down and agree or disagree. It's helpful to have these conversations." 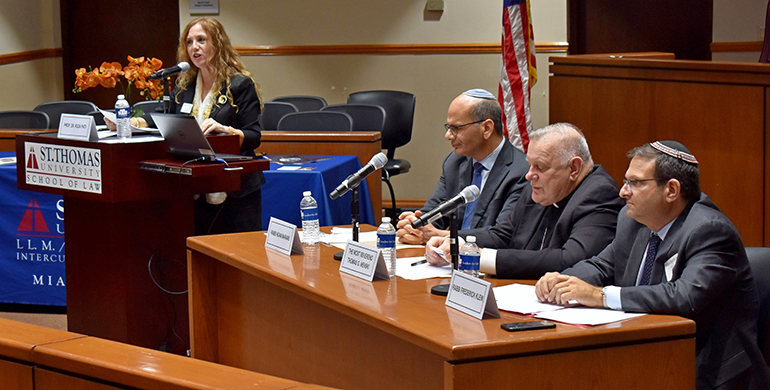 Law professor Rosa Pati puts questions to a panel of experts during a discussion on Vatican-Israel relations at St. Thomas University. The event honored the 25th anniversary of the Holy See's recognition of the Jewish state.