MIAMI GARDENS | A new Institute for Interfaith Leadership will be launched at St. Thomas University next year, according to university president David Armstrong. 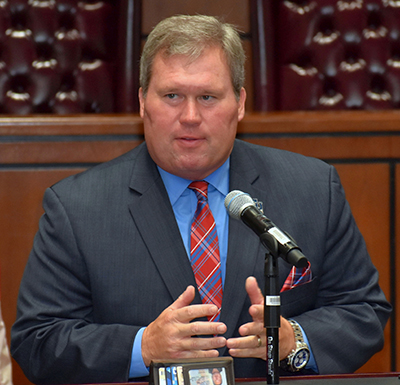 David Armstrong, president of St. Thomas University, addresses a panel discussion on Vatican-Israel relations at the university. The event honored the 25th anniversary of the Holy See's recognition of the Jewish state.

The institute will hold forums, host guest speakers, and use education to guard religious freedom, Armstrong said. It will even help support college fellows "for the development of ethical leadership," he added.

Armstrong made the announcement of the new institute Nov. 21 in STU's Moot Court, site of a panel discussion in observance of the 25th anniversary of the Vatican's recognition of the State of Israel.

He said he had told Vatican officials about the plans during a visit there this past summer. "They were excited about it," he said.

Armstrong said he talked in 2018 with leaders of the American Jewish Committee, who also cosponsored the Nov. 21 panel discussion. They discussed signs of a rising tide of anti-Semitism, such as the mass shooting that killed 11 at a synagogue in Pittsburgh.

At the Nov. 21 event, Armstrong called for Jews and Catholics to unite against the current rising tide of bigotry.

"It's imperative that we band together," he said. "If one of us is discriminated against, all of us are."

For the nascent interfaith institute, the first step is fundraising. Armstrong said he'll shoot for a $1 million endowment. He'll also search for an executive director.

"We'll probably hold a symposium in 2020 to get attention," he said.

Monday, 3 Aug 2020
The coronavirus: A bioethicist explains how it works