Fifth grader declares no homework, learns formula for being a good principal 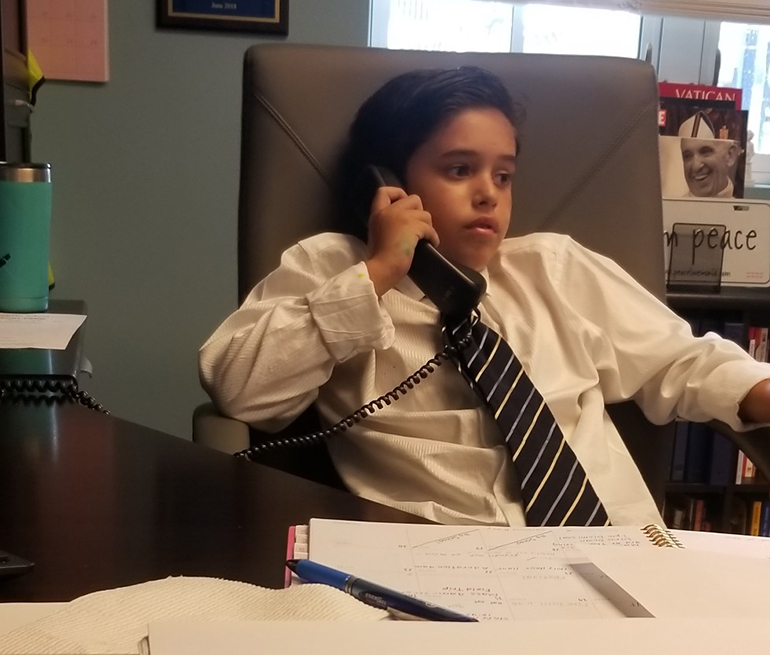 Diego Martinez, a fifth-grader at Blessed Trinity School in Miami Springs, takes a phone call while sitting in the principal's chair Oct. 2.

MIAMI SPRINGS | Principal for a day and no homework for all. That student fantasy came true for fifth-grader Diego Martinez, as he was named “principal for a day” at his own school, Blessed Trinity in Miami Springs.

The “job” was one of the items raffled at last year’s school fashion show, and his parents bought the winning ticket. 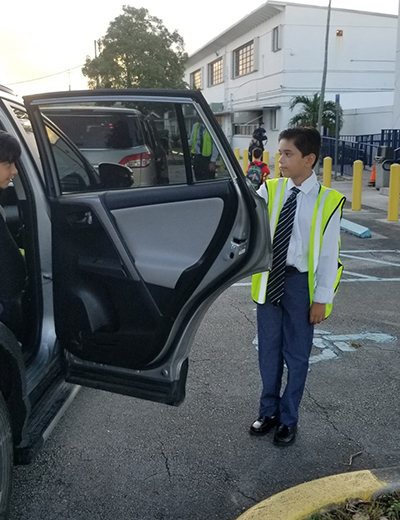 Diego Martinez, a fifth-grader at Blessed Trinity School in Miami Springs, takes his principal-for-a-day job seriously, beginning by welcoming parents, students and faculty as they arrive at the car line early in the morning. 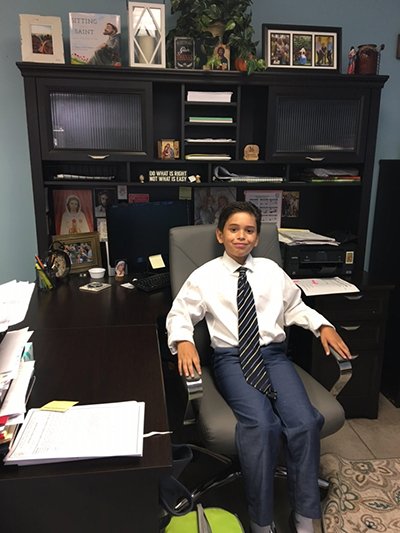 Diego Martinez, a fifth-grader at Blessed Trinity School in Miami Springs, sits in the principal's chair Oct. 2, doing his job as principal for a day. His parents literally "won" him the job during a raffle at last year's fashion show to benefit the school.

“We were really lucky that we won that item because it was one of the ones that Diego wanted. As soon as we won, he knew it was going to be for him,” said Teresa Martinez, Diego’s mother. She herself is an alumna of Blessed Trinity who now works as director of communications at Belen Jesuit Prep.

The youngest of three, Diego said he was excited when his sister, Karina, a seventh grader at the school, passed on the opportunity.

“I told them I’m going to be principal and I’m in charge now,” he said.

The morning of Oct. 2, he arrived at the school dressed for the part in a white button-down shirt, dress pants, a blue, yellow and black-striped tie, and dress shoes. Throwing on a neon yellow safety vest, he accompanied Blessed Trinity School Principal Debbie Ayash at the car-line drop-off, greeting students, parents and faculty members as they arrived.

“A lot of cars came by. When [parents] passed they looked at me curiously as to what was going on,” said Diego.

During the day, Diego and Ayash observed classes, where he was greeted as “Mr. Martinez” by students and faculty alike.

“It was pretty nice,” he said.

He particularly enjoyed visiting his own class, and later his sister Karina’s, noting that “she was really paying attention to her work.”

Combining his power as principal with sibling antics, he wanted to give no homework for his class and twice the amount of homework for his sister’s class. Ayash chuckled at the notion, but reminded him that leaders, especially principals, need to be fair.

“I asked him, ‘Do you want to give no homework to the whole school?’ and he said ‘Yes.’ And I asked why, and he said, “Because they were working really hard today when we went into the classrooms.’ I told him that was a great reason,” said Ayash.

Taking the academic schedule into account, they could not announce no homework that same day. Instead, Ayash told Diego he could announce the declaration the following day during morning announcements, and explain why he made his decision.

As “principal for a day,” Diego was invited into a principal’s meeting at the school, where he was sworn into such secrecy that not even his family can bribe him with ice cream to share the details.

Diego also was interviewed by the Florida Catholic, during which he discussed his duties and revealed that a career as a school principal is not in his future.

His mother, however, pointed out that the experience helped her son realize he has potential for leadership.

“He liked being in charge, and took it very seriously,” Martinez said.

Before loosening his tie and kicking off his shoes for the day, Diego pointed out the formula for a good principal: “You have to listen to others, and try to help them, and give as much as you can to help them.” 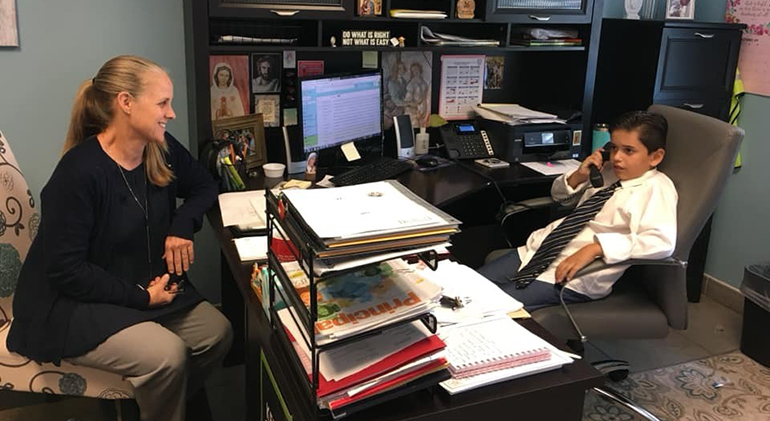 Diego Martinez, a fifth-grader at Blessed Trinity School in Miami Springs, spends a recent school day shadowing his principal, Debbie Ayash. His parents literally "won" him the job during a raffle at last year's fashion show to benefit the school.

Other News from Blessed Trinity School