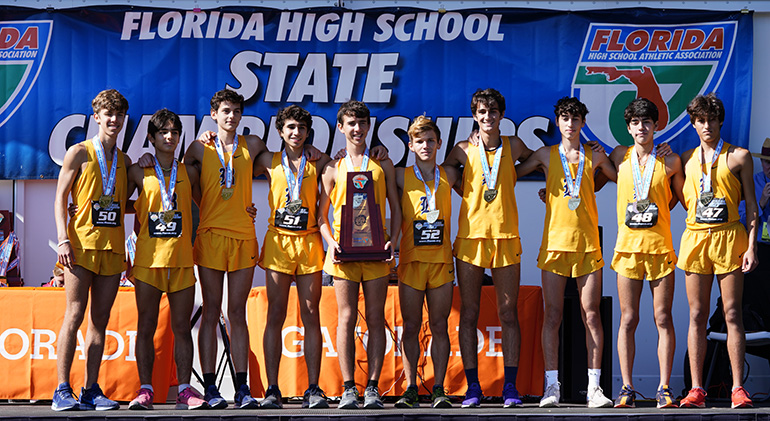 EDITOR’S NOTE: Cross-country meets are scored by individual placings; the team with the fewest points wins. Individuals not in teams do not earn points; that’s where the difference between placings and points comes into play.

The Wolverines won with 48 points, while Tampa Robinson had 81 points.

The victory helps Belen Jesuit break a championships tie with Largo at 10, a record Largo set in 1987. The Wolverines have won three in a row, the longest streak since the Wolverines won four in a row 2010-13. Coach Frankie Ruiz has led the Wolverines to 10 of those titles.

“I was telling a friend of mine, ‘You gotta celebrate it. You don’t want it to sound like it’s me, but it’s more the program,’” Ruiz said. “We’ve had a couple (of) amazing assistant coaches. I have Barq (former cross-country coach and current athletic director Carlos Barquin) who’s still around. The record is to be shared in this case. It’s not any one person’s doing. That’s the best way I can describe it.” 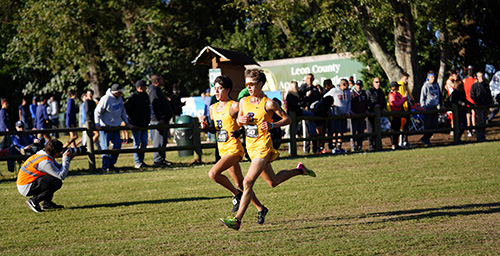 Belen Jesuit's Diego Gomez (#48) and Adam Magoulas (#50) run side by side to finish third and fourth, respectively, to help their school win its record-breaking 11th state cross country championship. 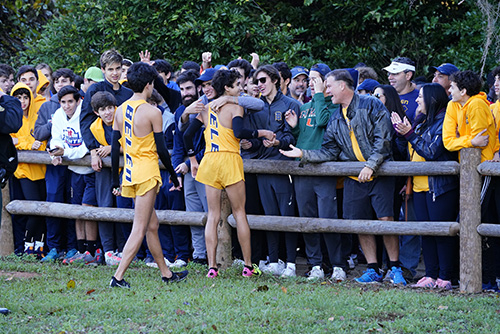 Belen Jesuit runners gets hugs and high-fives from their parents and school supporters after finishing the 5K race for the state cross country championship. 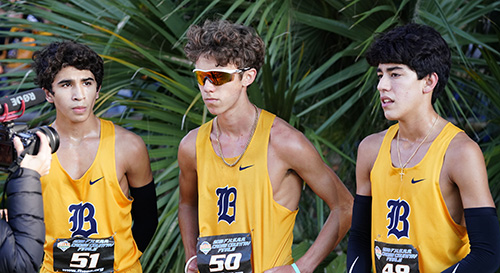 Belen Jesuit runners pose for a photo after finishing in third, fourth and fifth place in the 5K run for the state cross country championship. From left: Javier Vento, Adam Magoulas and Diego Gomez.

Ruiz said that he’s been telling Gomez that he’s talented. He said that Gomez put in the work and has started to believe it himself. Gomez said the top three Belen runners have trained and raced together most of the season.

“Our top three were expecting to get top 5 in the race. We went out with the top guys and tried to stay with the winners,” Gomez said. “We stayed up there and ended up coming in 3-4-5. Vento was able to close the gap.”

Cross-country meets go to the team with the fewest points. That’s where the Wolverines’ strategy of running together helped them win the title without an individual champion. The Wolverines earned a huge head start with Gomez’s three points, Magoulas’ four points, Vento’s five points and Hidalgo’s 12 points. Magoulas and Vento have overcome injuries. Magoulas suffered a fracture to his femur in the track season but returned in time for the summer workouts in June. Vento, the defending champion, missed summer workouts with a stress fracture in his ankle. He returned only in time for the cross-country season.

“This season goes down as one of the greatest seasons for Belen,” Magoulas said. “It’s the 50th anniversary for the program, so it’s nice to get the record for state wins in the 50th year.”

Tampa Robinson had the individual champion in Geiger, but its next runner, Richard Bennett, earned 14 points. By the time Robinson’s fourth runner, Ethan Hunter, came in with 24 points in 16:35.96, Bryan closed out Belen’s score with 25 points just over 1 second later.

Ruiz said that Bryan, who is applying to some of the top schools in the country, applies those smarts to his running.

“In previous years, we usually had one guy in front, then the pack behind,” Bryan said. “Every year we’re getting better at running a pack of three, then a second pack of four. That’s what we did today. We decided to work together, the four of us. We pushed each other and ended up winning the championship.”

Ruiz said the biggest challenge for the Wolverines was to stay motivated. They dominated several foes all season. That carried into a District 8-3A meet in which Belen runners finished 1-7 for a perfect 15 score. Belen also won regionals, setting up a chance for history.

But they stayed persistent, just as Barquin asked Ruiz to complete the chase for the record — a chase 32 years in the making since Largo won its last title.

“Barq had said to me, ‘I’ve never seen us getting this record for 32 years.’ He asked me if I could stick around long enough to get the record,” Ruiz said. “I guaranteed I would get it while I’m here. It was nice to get it on the 50th year of the program. It’s all a blink of an eye, but it’s still been a long time working on it.” 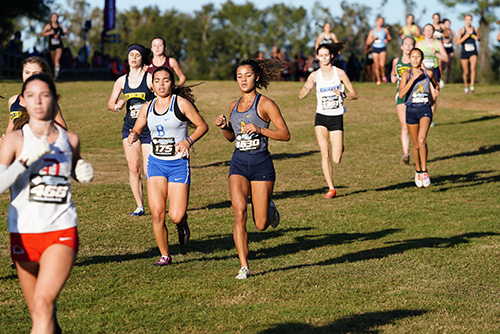 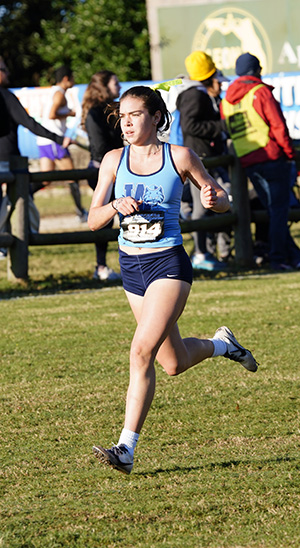 Our Lady of Lourdes Academy's junior Ana Rodriguez runs toward a 44th place finish in the 5K cross country state championship finals for Class 4A, held Nov. 9, 2019 in Tallahassee. The Bobcats took third place in the state meet.

Columbus’ boys took seventh in the Class 4A state meet with 238 points. After winning the Region 4-4A boys meet, the Explorers finished five in the top 77 points-earning spots. St. Thomas Aquinas followed a fifth-place region finish with a 22nd-place finish at state.

Our Lady of Lourdes took third in the Class 4A state meet with 196 points. Lithia Newsome won the girls event with 99 points followed by Tallahassee Childes’ 179. 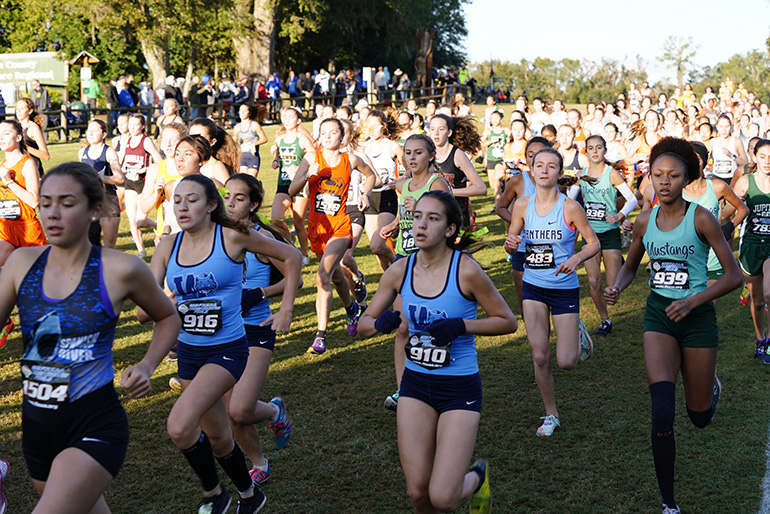 Our Lady of Lourdes Academy's Ashley Williams (#916) and Alana Maria Batista (#910) run in the 5K cross country state championship finals for Class 4A, held Nov. 9, 2019 in Tallahassee. The Bobcats took third place in the state meet.

Articles(54)
Our Lady of Lourdes Academy