The one way to go right is the way of love 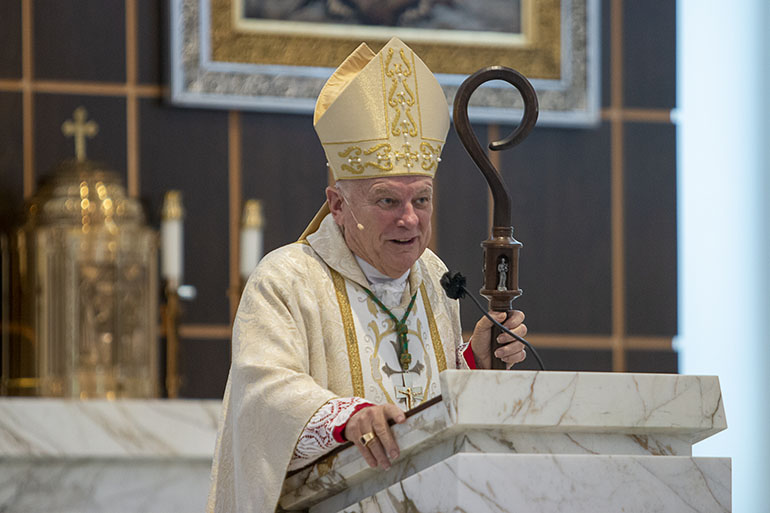 Archbishop Thomas Wenski preaches the homily at the opening Mass of Retrouvaille's international conference, Nov. 4, 2022. Close to 500 couples representing the Retrouvaille ministry around the U.S. and the world gathered at Our Lady of Guadalupe Church in Doral Nov. 4, 2022, for the opening Mass of their three-day international conference, hosted by the Miami community. Retrouvaille is a movement for couples struggling in their marriages.

Archbishop Thomas Wenski preached this homily at the start of the International Council Meeting of Retrouvaille, a ministry designed to help heal and renew marriages. The Mass was celebrated at Our Lady of Guadalupe Church, Doral, Nov. 4, 2022.

There's a story about little Johnny who was quite a handful and often would exasperate his mother. One time, she lost patience with him and shouted at him "Johnny, you're good for nothing.” Of course, Johnny's mother didn't mean what she said. And thankfully, Johnny was not a fragile child. He gave as good as he took: With an impish grin, Johnny looked at his mother and said, “I am too good for something. I am good for being a bad example.”

Well, in today's Gospel, Jesus presents the dishonest steward not because he wanted to praise or commend his dishonesty. What we have here is a bad person giving a good example. Jesus obviously thought that this rascal would be a perfect illustration for a spiritual lesson about the Kingdom of God.

What's the point that Jesus is trying to make? He is commending the steward for his shrewdness — or as we heard in the Gospel — "for acting prudently.” Obviously, the steward was in a real jam, but he was shrewd enough, prudent enough to assess his situation and act decisively with some foresight. Now, of course, Jesus is concerned here with something more important than a financial crisis. He is concerned that we avert spiritual crisis through the exercise of faith and foresight. In other words, he is saying, "Shouldn't we believers expend as much energy and forward thinking about spiritual matters that do have eternal consequences as much as we do in earthy matters which have consequences that are only temporal?” If we did so, Jesus is telling us, we would be better off, both in this life and in the life to come. 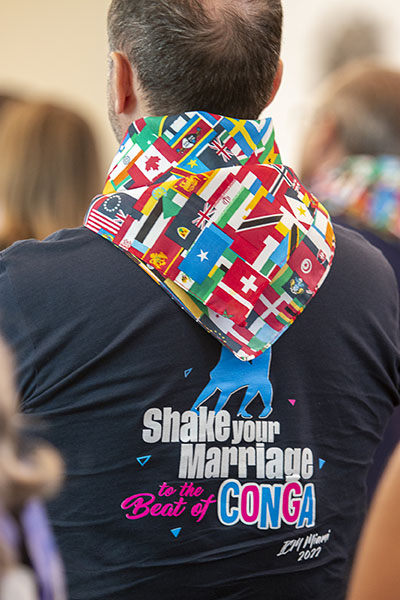 T-shirts worn by members of Miami's Retrouvaille community welcoming members from around the world to the international conference hosted here, Nov. 4-6, 2022. Close to 500 couples representing the Retrouvaille ministry around the U.S. and the world gathered at Our Lady of Guadalupe Church in Doral Nov. 4, 2022, for the opening Mass of their three-day international conference, hosted by the Miami community. Retrouvaille is a movement for couples struggling in their marriages.

If the dishonest steward and little Johnny are “bad examples,” I think the Retrouvaille is a “good example” of “acting prudently” and acting with faith and foresight even in times of crisis. Prudence teaches that “going your separate ways” is going to be a lot harder than rediscovering your commitment.

In the first reading, St. Paul tells the Philippians: “Join with others in being imitators of me, brothers and sisters, and observe those who thus conduct themselves according to the model you have in usÃ¢â¬Â¦”

A man called to the priesthood offers himself completely to God’s Church, just as a husband in marriage gives himself completely, holding nothing back from his wife. A consecrated woman gives herself in total devotion as a bride of Christ, just as a wife gives herself unreservedly in matrimony to her husband. All of these examples are renunciations of the self to love in imitation of Christ.

And these are simply the normal high standards of the Gospel that each one of us, through baptism, is to aspire to. As the bishops of the Second Vatican Council said in underlining the universal call to holiness of all the baptized: We can only realize ourselves as human beings – and become the men or women that God calls us to be – only through the sincere gift of ourselves. Thus, for the Christian, the way to true happiness – or to put it in a theological way – to beatitude – is found not through self-seeking or self-assertion but through self-giving and self-sacrifice. So, St. Paul says in that first reading: “... stand firm in the Lord, my beloved.”

For the Christian, the way to happiness is love – which requires us to take up the cross and follow him. Jesus promises us glory – but the road to glory passes along the way of the Cross, the way of self-forgetting love.

This is the kind of love that unites, a love that heals, a love that reconciles. Sin divides, sin hurts, and sin engenders conflict. Oftentimes, when we come across conflict and division, we misidentify its causes. In the Body of Christ, we are many members – and each member is different. And when we observe division or conflict, we might think that the reason is because of the differences.

But that is to misplace the blame. It is almost blasphemous – because it is as if we are blaming God, who created each one of us – with his or her differences. In the Church, there is great diversity – of language, of cultures, of races; we are male and female, we are rich and poor, learned, and unlearned. And in God’s plan, this diversity is not meant to divide the Church but to enrich the Church – for God has made us in such a wise way that there is no one too poor that he does not have something to give, nor is there anyone so rich that he cannot receive.

Your life together "for better or for worse, for richer or for poorer, in sickness and in health” is a beautiful witness that God who is love made us, male and female, in his own image and likeness and in doing so God put into the humanity of man and woman the vocation – and thus the capacity and the responsibility – of love and communion.

But, as you know, getting married does not end problems. This life is a "valley of tears" and for us there is no escaping the trials and tests of life. But being married means you can face those problems together. As Pope Francis told a group of newlyweds a few years ago, “Living together within the bonds of holy matrimony is an art, it is a patient, beautiful and fascinating journey.”

That journey, the pope told those young couples, can be summarized in three words: “please, thank you, and sorry.”

But I am sure that the pope didn't say anything that you don't know already.

The Russian novelist, Leo Tolstoy, in “Anna Karenina” says, “Happy families are alike; every unhappy family is unhappy in its own way.” In other words, there are many ways to go wrong; but the one way to go right is the way of love.

Well, let me end at the beginning – with little Johnny. His mother enrolled him in the parish religious education program. One day when he came home from class, his mom asked what he learned that day. He answered that the teacher told them about the water changing into wine (at the wedding feast of Cana). So, his mother said, what did you learn about that? He replied, “Well, if you’re going to have a wedding you ought to invite Jesus and Mary.”