'We just try to give back'

It's that simple for those honored with Faith, Hope and Charity awards at ThanksforGiving Mass

MIAMI | It takes a while for Wadi and Jackie Barreto to list the ministries they are involved in.

They are the South Florida coordinators for Retrouvaille, a ministry for couples who are struggling in their marriages. Every month they lead a conference for spiritual growth for the Emmaus retreat movement. They are “parish marriage missionaries” for Annunciation Ministries. He’s involved in the Catholic Men’s Leadership Alliance. She’s involved in Emmaus at one of the two parishes they consider home, St. Brendan in Miami; the other is Our Lady of Guadalupe in Doral. 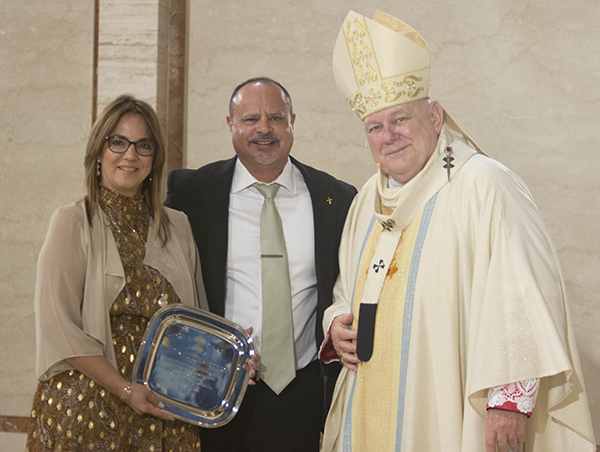 Jackie and Wadi Barreto receive the One in Faith award from Archbishop Thomas Wenski during the ThanksforGiving Mass, Nov. 20, 2021 at St. Mary Cathedral.

The Barretos also run their own business, are parents to three children and grandparents to two.

But they said they never imagined receiving the One in Faith award given annually by the archdiocesan Development Office during the ThanksforGiving Mass, this year celebrated Nov. 20, 2021, at St. Mary Cathedral.

One in Faith recognizes an individual or family who exemplify “excellence in evangelization.”

“We don’t deserve it,” said Wadi Barreto, who has been married to Jackie for 30 years. Both came to Miami from Puerto Rico after their marriage.

He said his involvement with the Church began when he served on the St. Brendan Athletic Association, a no longer active group that Jackie described as “a way to evangelize (children) outside the school” through sports.

Everything else just followed.

“He’s been good to us,” Wadi added, referring to God. “We just try to give him back.”

Tony and Conchi Argiz, members of St. Augustine Parish in Coral Gables and recipients of the One in Charity award, cited a similar mantra. Their award recognizes an individual or family for their “constant support” of the Archbishop’s Charities and Development drive (ABCD).

“We do it with a lot of love because we’ve had many gifts in our lives and we’re just happy that we can share. That’s what it boils down to,” said Conchi as Tony, sitting beside her, became emotional. 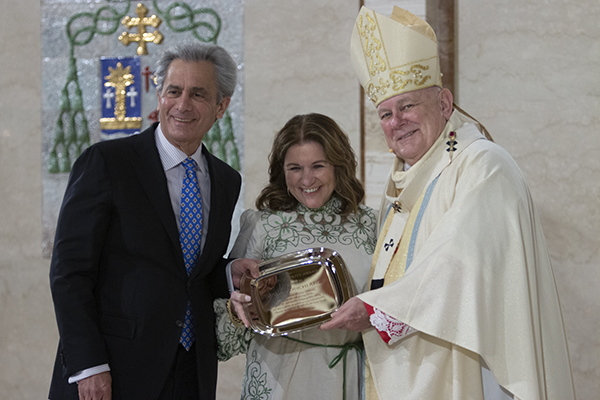 Tony and Conchi Argiz receive the One in Charity award from Archbishop Thomas Wenski during the ThanksforGiving Mass, Nov. 20, 2021 at St. Mary Cathedral.

“The Church was there to help him,” Conchi explained, citing his arrival in this country from Cuba in the early 1960s through the Pedro Pan airlift for unaccompanied minors, organized and run by Miami’sCatholic Charities. “(They) put him in school. Fed him. Clothed him. And gave him the foundation (for life),” she said. “He’s very grateful.”

Gratitude, in fact, is the reason for the ThanksforGiving Mass, which honors the hundreds of Catholics who contribute faithfully to the ABCD. The annual pledge drive, which kicks off each January and concludes in March, raises the money needed to keep archdiocesan ministries going — everything from Catechesis to Youth and Young Adults — while helping to fund schools serving low-income neighborhoods and the education of men studying for the priesthood.

The ThanksforGiving Mass is usually celebrated the Saturday before Thanksgiving, which also coincides with the annual celebration of Stewardship Month in November.

The Development Office began the Mass tradition, and the One in Faith, One in Hope, One in Charity awards, in 2012. The awards match the motto of the ABCD.

Marie Herlyne Sullin of St. James Parish in North Miami, received the One in Hope award this year, but could not be present at the Mass. The award recognizes an individual or family “who embodies the four infinitives of stewardship: receiving God’s gifts gratefully, nurturing God’s gifts responsibly, sharing God’s gifts justly and sacrificially, and returning God’s gifts abundantly.”

Described as a “volunteer extraordinaire” by those who know her, Sullin is a member of her parish’s Stewardship Council, the church’s webmaster and social media director, and a catechist.

In his homily, Archbishop Thomas Wenski thanked all those who contribute to the ABCD, telling them, “Your support of the ABCD changes lives and through its many works of tenderness, compassion, and mercy you make Christ’s kingdom real for so many.”

During the Mass, 20 individuals were inducted into the Archbishop Coleman Carroll Legacy Society, in recognition for including the archdiocese in their estate and financial plans. The new inductees bring the number of Legacy Society members to around 855, both living and deceased.