A saint who spent a fortune on souls

Christ Pantocrator, or All-Ruler, gazes from the ceiling of the narthex at St. Katharine Drexel Church. Icons were a particular interest of its founding pastor, the late Father Paul Edwards.

Three icons stand behind the altar. The central double icon, Our Lady of the Sign, is based on the belief that while Mary was pregnant with Jesus, her womb itself was a holy sanctuary.

During the afternoon, a ray of sunlight falls across Our Lady of the Sign, highlighting the Christ Child.

Angels summon magi and shepherds to the stable to celebrate the birth of Jesus in the second icon behind the altar. The Star of Bethlehem has six points -- a Star of David, testifying Mary's lineage from that famed Jewish king. But at lower right, midwives wash the Christ Child, who was a vulnerable human as well as the Son of God.

Christ rises amid seraphim in the Ascension icon, the third icon behind the altar. Two angels confirm to Mary and the disciples that he will return one day.

A kindly St. Joseph holds the young Jesus in this icon to the left of the altar.

The patroness of St. Katharine Drexel Church stands to the right of the altar. The 19th century educator combined prayerfulness with ministry to the disadvantaged.

Above the altar, a full-size crucifixion icon hangs at an angle, making it visible even to those sitting in the front.

Close-up of the crucifixion icon shows blood flowing from his side, which a soldier had pierced with a spear to confirm he was dead.

Jesus communes with his disciples on the metal doors to the Tabernacle, the chest that holds the elements of the Eucharist.

Jesus performs his first public miracle in this icon at St. Katharine Drexel Church. Into a large jar, a servant pours water, which is already turning into wine.

Mary grieves over her son in this icon at St. Katharine Drexel Church. The "King of Glory" icon shows his wounds and closed eyes, as well as the tools of his torment and execution. But the grave is open, foreshadowing his resurrection.

The Trinity of Father, Son and Holy Spirit is depicted as nearly identical beings.

Immaculate Conception icon visualizes the "wondrous sign" in Revelation: "A woman clothed with the sun, and the moon under her feet, and upon her head a crown of twelve stars." She pins a serpent underfoot, in accordance with a prophecy in Genesis that the "seed of the woman" would crush Satan's head.

St. Joseph reappears in a smaller room among other icons at St. Katharine Drexel Church.

Sheep literally look up to Jesus in this Good Shepherd icon.

The archangel Michael vanquishes Satan, portrayed as a dragon.

The Divine Mercy image, with Jesus emanating rays of red and blue, gets an iconic interpretation. The original painting, based on a vision by St. Faustina Kowalska, hangs in a shrine in Krakow.

One of the few non-iconic artworks at St. Katharine Drexel is this digital reproduction of Our Lady of Guadalupe, donated by a parishioner in 2014. The image was blessed by Cardinal Norbert Rivera Carrera, archbishop of Mexico from 1995 to 2017.

A very traditional-looking icon, Our Lady of Perpetual Help, was a donation from a parishioner.

Icons of three archangels -- Gabriel, Michael and Raphael -- hang in a church office.

Flowers form an arch and foreground for a Marian shrine on the church grounds.

This small garden on the church grounds is dedicated to Our Lady of Schoenstatt, a devotion launched in Germany in the early 20th century.

WESTON | "GIVES UP SEVEN MILLION!" screamed a headline in 1889. Katharine Drexel's decision, shortly after the death of her wealthy father, seemed madness in upper-class Philadelphia.

She didn't care. She was spending the money on what she wanted: schools and missions for disadvantaged Native Americans and southern Blacks. 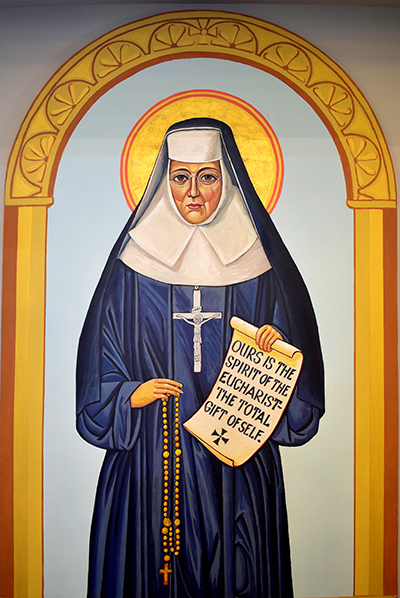 The patroness of St. Katharine Drexel Church stands to the right of the chancel. The 19th century educator combined prayerfulness with ministry to the disadvantaged.

Her generosity and compassion, plus her founding of a religious order, eventually earned her the title of St. Katharine Drexel, whose feast falls on March 3.

The family into which Katharine was born in 1858 was wealthy, privileged and well connected. The family lived on a 90-acre estate and traveled in a private railroad car. Her father, Francis Anthony Drexel, was an international banker. Her uncle, A.J. Drexel, founded Drexel University in Philadelphia. Katharine had an excellent education, traveled widely and enjoyed a rich social life.

Her deeply Catholic family also imparted a social conscience in her, with their blend of faith and philanthropy. Her father spent a half-hour each night in prayer. He and his wife opened their home to the poor each week, giving out money, clothing, blankets, medicine and other necessities. They also endowed schools and churches for the underprivileged in southern and western states.

The Drexels' comfortable life was shaken as Katharine nursed her mother through a battle with cancer, which the mother finally lost after three years. Katharine saw that even wealth was no shield against pain or death.

The young woman had been shaken also by her tours in the American South and West, witnessing the poverty and lack of opportunities for Blacks and Native Americans. After her father died in 1885, she expanded the family's aid to the impoverished minorities.

A pivotal moment came in 1887 during an audience with Pope Leo XIII in Rome. She asked the Holy Father to send nuns to staff her mission schools. To her shock, he said: "Why don’t you become a missionary?"

After some consideration, Katharine joined the Sisters of Mercy in Philadelphia; then she founded her own order, the Sisters of the Blessed Sacrament, dedicated to serving Blacks and Native Americans. In getting the new group approved in Rome, she relied on advice from another future saint: Mother Frances Cabrini, founder of her own charitable order.

Her sisters threw themselves into a huge development campaign, founding dozens of schools, missions and convents with tribes as diverse as the Navajo in Arizona, the Sioux in the Dakotas, and the Pueblo in New Mexico. They also launched 50 schools for southern and western Blacks, including Xavier University in New Orleans — the first Catholic university in the United States for African Americans. 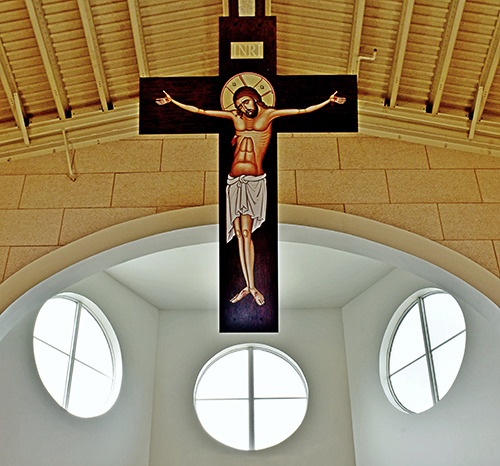 Above the chancel, a full-size crucifixion icon hangs at an angle, making it visible even to those sitting in the front. 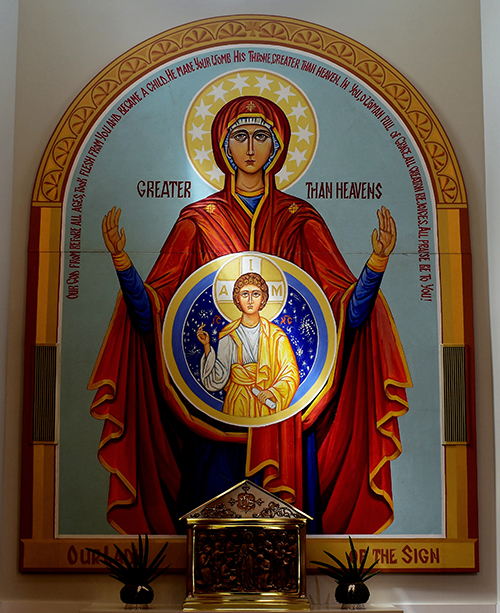 During the afternoon, a ray of sunlight falls across Our Lady of the Sign, highlighting the Christ Child.

Mother Katharine, as she preferred to be called, was tireless in advocating the rights of Blacks and Native Americans as well. She supported petitions to Congress to increase aid to reservations schools and started a letter-writing campaign for a federal law against lynching. Her activism drew occasional arson and a threat by the Klan in Texas.

Only a heart attack at 77 forced Mother Katharine's retirement. Even then, her vocation was literally close to her heart. She lived another 19 years in a small room overlooking a mission sanctuary, praying and writing.

Although there are no official figures, St. Katharine Drexel may have given away nearly $20 million over her lifetime, according to the Washington, D.C.-based Philanthropy Roundtable — which would come out to more than a half-billion dollars today.

By her death in 1955 at the age of 96, there were more than 500 Blessed Sacrament Sisters teaching in 63 schools. She was canonized by Pope John Paul II in 2000, the second native-born American to be declared a saint — after another 19th century educator, St. Elizabeth Ann Seton.

For her twin goals of benevolence and leveling social barriers, St. Katharine Drexel is the patron saint of racial justice and philanthropy.

At Mother Katharine's namesake parish in Weston one distinctive is the lack of statues and stained glass. Instead, the walls are filled with Greek-style icons — a special love of Father Paul Edwards, who served the church as pastor from its founding in 2001 until his death in 2006.

Visitors who gaze up in the narthex can see the circular Christos Pantocrator, or Christ the All-Ruler, a common icon for the underside of Orthodox church rotundas. Behind the altar is Our Lady of the Sign, an icon-within-an-icon embodying the concept that Mary's womb was a holy sanctuary while she carried the unborn Jesus. Mother Katharine herself is honored in an icon.

Some of the artworks were first installed in an office park, where the church worshiped from 2002 to 2014. When St. Katharine Drexel finally got its own home in 2014, the members carefully pried the icons from the walls and moved them to the new 18,000-square-foot building. Several new icons have been added since then.

In 2010, after being served by several priests, the church got its current pastor, Father Enrique Delgado, a businessman who was called to the priesthood after years as an industrial engineer in Peru. He continues his pastorate at St. Katharine Drexel after his appointment in 2017 as auxiliary bishop of Miami. 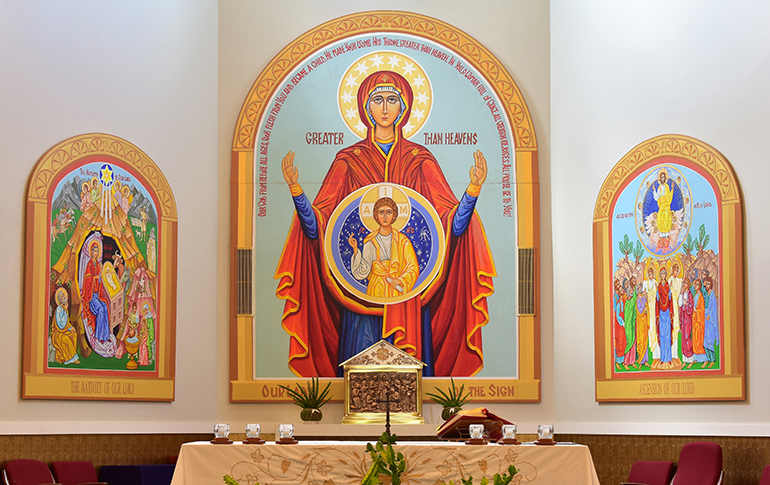 Three icons share the chancel area at St. Katharine Drexel Church. The central double icon, Our Lady of the Sign, is based on the belief that while Mary was pregnant with Jesus, her womb itself was a holy sanctuary.