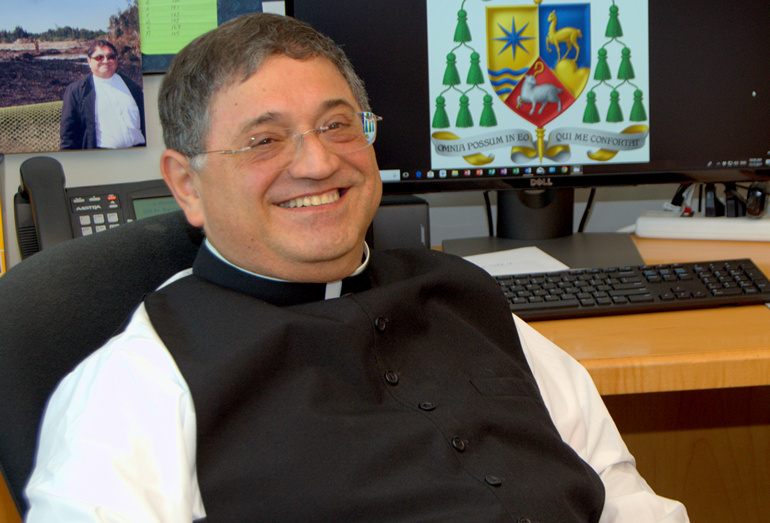 Bishop Enrique Delgado has already designed his coat of arms as auxiliary bishop of Miami. The emblem blends symbols of Peru, where he was born, with those of South Florida, home of the archdiocese he serves.

It was around 1990, while he was a businessman. He visited the chapel at the Jesuit-aligned Sophia University in Tokyo and found himself transfixed by a picture of a cross in the gift shop.

He asked a nun what the inscription in Japanese below the cross said. "She handed me a Bible in English and Japanese. It said, ‘Follow me, and I will make you fishers of men.’

"It was like thunder from my head to my heart," he said in an interview at St. Katharine Drexel Church, Weston, where he has been pastor since 2010. "I was petrified."

The experience galvanized him to pursue the call â a path leading to his ordination as an archdiocesan priest, and then to his selection as the newest auxiliary bishop of Miami.

As news spread on Oct. 12 about the Vatican's choice, Bishop Delgado's friends rushed to praise him.

"We deserve a person like him to be bishop," said Father Michael Hoyer of St. Gregory Church, Plantation, a friend for more than a quarter-century. "He is a pastor and a people person. He is the soul and spirit of kindness and compassion and service."

Hedalys Anton-Aguirre, a confirmation teacher at St. Katharine Drexel, said she felt "very emotional" at the news of Father Delgado's selection. "When you know someone who is a spiritual leader, and going to be in another ministry, you know he is a good guy. I hope he can stay with us for a few more months."

What kind of bishop is the archdiocese getting? For one, the Lima native will be the first Peruvian-born bishop in the U.S. For another, he brings to the vocation a business background, holding an economics degree from the University of Lima.

A business career may seem a sharp break from a spiritual vocation, but Bishop Delgado seems to blend them well.

"In business, you organize people and delegate a lot," he said. "At the end, everything is translated into numbers. You can read them and see what's going on, and if they're in favor of the people of God."

But what friends and colleagues mention most is Bishop Delgado's personality: cheerful, friendly, gregarious. They also note a focused, serious, studious side. Also a hardworking efficiency born of years in the business world. And earnest determination to do what's best for parishioners. 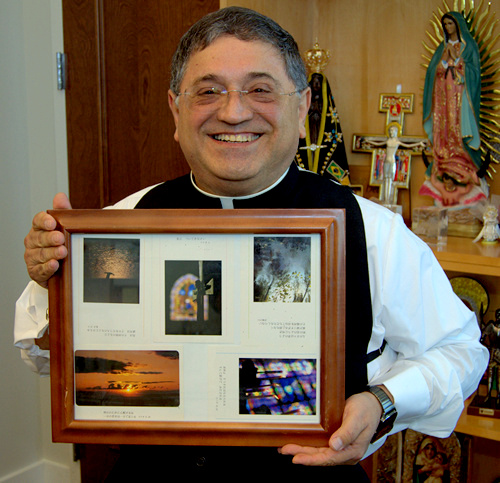 Bishop Enrique Delgado shows a plaque from Sophia University, Tokyo, that includes the photo of a cross that inspired him to become a priest.

"A bishop sometimes gets walled off with bureaucracy and administration," said Father Hoyer, with whom Bishop Delgado stayed for six months at Our Lady Queen of Martyrs Church in Fort Lauderdale. "But he is very approachable. He will be very good for the episcopacy."

"He brings a warm and enthusiastic presence that is personal and encouraging," Froehle said. "I've been in crowds and turned around and found him going out of his way to wish someone well or to reach out to someone."

The road to Bishop Delgado's second vocation, however, wasn’t a steady progression. On the way from Japan to his home in Peru, he stopped over in Miami. He stayed overnight at St. John Vianney College Seminary and saw men his age preparing for the priesthood. The sight reassured him that it wasn't too late to choose a second vocation.

Before entering seminary, he took an extra step in 1991, sampling church life at Our Lady Queen of Martyrs. Father Hoyer, who was pastor there at the time, admired Father Delgado's cheerful work ethic.

But seminary life was a major adjustment, Bishop Delgado confessed. On his first day at St. John Vianney, his first task was to clean bathrooms. This after years as a globe-trotting businessman.

"It was a terrible first day," he said with a grin. "That moment, I realized I would have to start all over again. As an engineer, I had to compete to be the best. At seminary, I discovered that if you are the last, you are the best."

However, at both schools â St. John Vianney and St. Vincent De Paul, the major seminary near Boynton Beach â instructors noted his single-minded seriousness at study and learning.

"He was always hungry to learn," said Father Juan Sosa, who taught liturgy and the Rite of Christian Initiation for Adults (RCIA) at St. Vincent De Paul. "He was eager to be prepared to serve. Excited to introduce people to Jesus."

Bishop John Noonan of Orlando, who was vice rector at St. John Vianney at the time, remembers Bishop Delgado as "mature, quiet, very focused.  He was a deep thinker, with an analytical background."

Not that Bishop Delgado was a recluse â not with friends like Fernando Heria, who occasionally hosted retreats for fellow seminarians at his family's house in the Keys. They not only did devotions but went boating, fishing, swimming and riding a jet ski.

"The Miami group stuck together," said Father Heria, now the rector at the Shrine of Our Lady of Charity in Miami. "Enrique was a very smart man â but a gentle, humble, simple man."

His priestly ordination seemed almost like a destination wedding â traveling to Lima with 16 priests plus Auxiliary Bishop Agustin Roman, who conferred the sacrament. They toured the Peruvian capital, as well as sites like Cuzco and Machu Picchu. And Father Sosa served as emcee at the ordination.

"It was easier to go there with one bishop than for my family to come here," Bishop Delgado said. 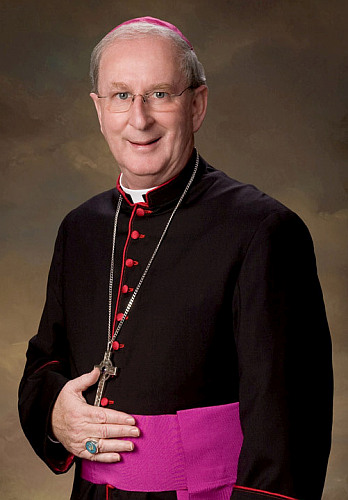 "As Pope Francis said, he smelled like the sheep," Bishop John Noonan of Orlando says of Bishop Enrique Delgado. He first met Father Delgado while teaching at Saint John Vianney College Seminary, Miami, when the latter was a student.

As Bishop Roman laid hands on his head, it was one of the most spiritual moments of his life. "I felt a total surrender of life in that moment. You realize that now, you are not you â you are a servant of God. I felt very humble and, at the same time, totally connected with God."

After his ordination, Bishop Delgado was a parochial vicar at St. Agnes Church on Key Biscayne, then at Nativity Church in Hollywood.

He got his first pastorate in 2003 at St. Justin Martyr Church on Key Largo. There, he used his business savvy to pay down a debt of more than $1 million.

Father Stephen Hilley, who followed him at St. Justin, voiced "profound respect" for the achievement. "He arranged for large matching gifts and earned the respect of donors. He was good at making people realize it was something that needed to be done."

At his current church, St. Katharine Drexel, he led a campaign to get the congregation out of a makeshift sanctuary in a warehouse district. He succeeded in 2015, when Archbishop Thomas Wenski dedicated the parish in its own home.

Nor did his education end: While at St. Katharine Drexel, he studied for years at St. Thomas University for a doctorate in practical theology. His 300-page dissertation impressed Froehle, who directs the university’s Program in Practical Theology.

"It was remarkable," Froehle said. "It included a theological study of the role of a priest, but also the relationship between those in ecclesial ministry and lay leadership. He pursued the question of research that would deepen engagement of parishioners in the life of a parish. And how to transform a life toward adult discipleship."

Parishioner Hedalys Anton-Aguirre values his open-door policy â a practice that she has used more than once when she needed advice and counseling.

"Whenever you go to church, he's there," she said. "If you have a question about church, he listens. And you always have an answer from him."

She recalls a homily of his at St. Katharine Drexel. "He said that when he goes to heaven and God asks, 'What did you do for your parish?,' he is going to answer, 'I have all my people working with me. I didn’t lose anyone.'"

Among his teaching tools are service projects, from here to Peru to the Dominican Republic. "One of the things we need to promote is that you show your love of God in love of your brothers and sisters," he said. "That’s why we have plenty of opportunities to reach out to people in need."

"We need not just to serve holy bread, but [show] how to get the bread," Bishop Delgado explained. "That's part of the gospel. Wherever we see a suffering brother, there's the face of Jesus."

What kind of bishop will Father Delgado be? The most-common phrase from his friends: "a pastoral bishop."

"I think he'll be known for deepening faith in the people, modeled on his own deep faith and his trust in what God is doing," said Froehle of St. Thomas University. "He's going to bring warmth and enthusiasm and engagement."

Added Bishop Noonan: "He'll be a typical Pope Francis bishop. As Pope Francis says, he smells like the sheep. And he will be beloved by them."