MIAMI | When Sister Yamile Saieh came to Miami in 1984, it was to care for her aging mother after her father died. But that didn’t mean she stopped working.

Her ever-present smile and her black Salesian habit were soon part of the landscape at Notre Dame d’Haiti Church, where she taught religious education to the children, English to the adults, and ran a summer camp that sometimes enrolled as many as 1,000 kids. 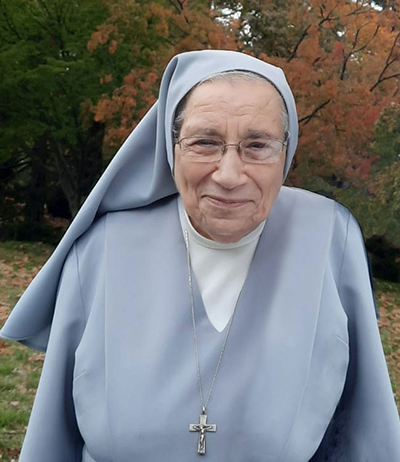 Later, she taught RCIA classes in Spanish to adults seeking to join the Church and prepared children for baptism at St. Martha Church in Miami Shores, where she also volunteered at the gift shop and helped in the office.

When she left Miami nearly five months ago to return to her community’s motherhouse in New Jersey, Archbishop Thomas Wenski called her “a mother to us all.”

Now the people she left behind are remembering her as “a beautiful sign of love,” in the words of Ileana Roque, administrative assistant in the archdiocesan Vocations Office who also helped in the Office for Religious.

Sister Yamile died on Valentine’s Day, Feb. 14, 2021, after undergoing surgery for a heart problem. She was 83 and had spent 61 years in religious life.

“She never wanted to celebrate her anniversaries as a religious, which was odd to me,” Roque said. “I asked her each time when she was up for a jubilee celebration and she would simply brush it off as a bashful nun. But the fact that she died on Valentine’s Day, and at her convent, is a big sign for me that we need to celebrate her life the more.”

While in Miami, Sister Yamile also found time to become the longest serving member — 14 years — of the archdiocesan Vocations Board, the group that screens potential priests before they are admitted to the seminary.

“Actually, she ‘checked out’ all the seminarians,” said Archbishop Wenski, who hired Sister Yamile at Notre Dame d’Haiti when he was pastor there and to whom she was devoted.

“She was a good example to me and a friend,” the archbishop said. “As auxiliary bishop – and later as archbishop – if I didn’t have an engagement to celebrate Mass in a parish, I would say Mass in the chapel of my residence, and she would come faithfully to ‘serve’ the Mass.” 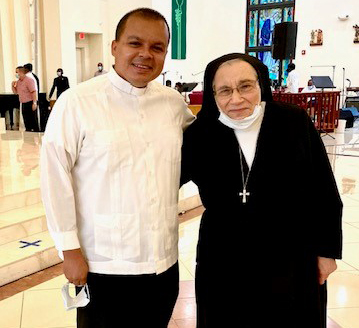 Salesian Sister Yamile Saieh is shown here with Father Elvis Gonzalez at her farewell Mass in September 2020. The two became good friends when he was director of the Office of Vocations and she served on the Vocations Board, screening would-be seminarians.

The archbishop explained that, over the years, the Vocations Office would assign seminarians, mostly from St. John Vianney College Seminary, to work as camp counselors at Notre Dame d’Haiti for six weeks during the summer.

“She was a good supervisor and had a good judgment in evaluating the seminarians,” the archbishop said, which is why she was asked to join the Vocations Board. “The seminary formation team usually said that Sister’s evaluations were right on.”

“She had a good eye for good and authentic vocations. She looked beyond the superficial. And all of her feedback, she got it right,” agreed Father Elvis Gonzalez, who served as vocations director until the end of June 2020. He is now administrator of St. Michael the Archangel Church in Miami.

He and Sister Yamile also developed a close friendship, and he would often invite her out to lunch. Her favorite restaurant was a Colombian place — Los Antojos — located on Biscayne Boulevard just north of the archdiocesan Pastoral Center.

They would walk in, he in his collar and she in her habit, and he would tell the servers, “This is my wife.”

“She was very joyful,” Father Elvis recalled. “I never saw her angry. I always saw her smiling.” 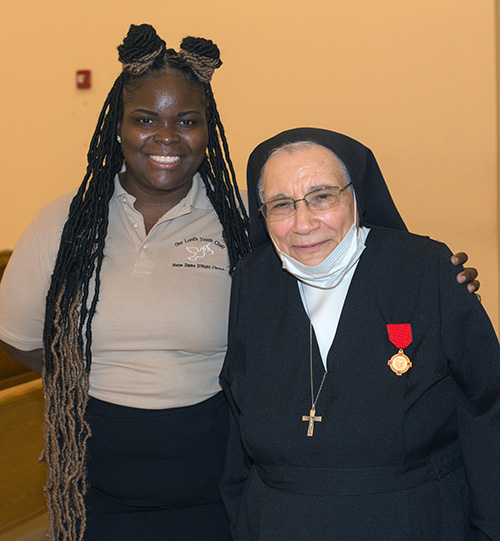 “She very much maintained her sense of humor,” said Father Lazarus Gavin, pastor of St. Martha, who noted that after her mother died, she continued to care for several of her sisters and a brother. Only one sibling, Yolanda, survives her.

“She was a woman of faith, but a very realistic faith,” Father Govin said. He noted her “strong character, organization” and how her students “loved and respected her. She was always a woman who worked and solved problems.”

Born May 1, 1937 in Cúcuta, Colombia, Sister Yamile was one of 11 children born to very Catholic Palestinian parents. Her mother and father both had been born in Bethlehem and had emigrated separately to Colombia.

“She was very proud of the fact that when her father had first emigrated from Palestine, his first stop was Cap-Haitien, Haiti,” Archbishop Wenski said.

“I love them, the Haitians so much. They are beautiful people,” she told the Florida Catholic at her farewell Mass last year.

Drawn to teaching, Sister Yamile entered the Salesian congregation a few years after high school. She professed her first vows Aug. 5, 1960 in Casanova, Italy, and received a degree in education with a specialization in psychology from the International Institute of Pedagogy and Religious Sciences in Turin, Italy. She taught in her native Colombia before moving on to schools in New Jersey; New York City; Woodstock, Virginia; and Tampa, Florida.