Ordained at 53, promoted devotion to Blessed Mother through Legion of Mary, brown scapular 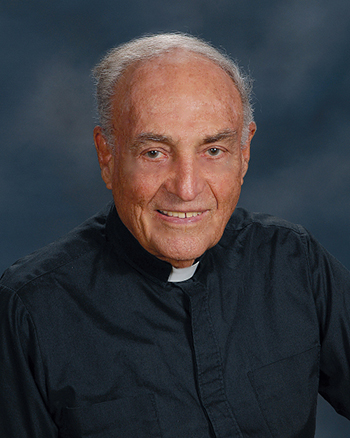 HOLLYWOOD | A good man. A holy man. An extraordinary priest.

“He was my spiritual director and he did so much for my spiritual life. I cannot say enough about Father,” said Gladys Issa, a member of St. Brendan Parish in Miami and current president of its Legion of Mary group.

Issa first met Father Soulliere when he was introduced as the new parochial vicar at St. Brendan in December 1988. A few months later, he started the Legion of Mary at the parish. Issa last saw him in person on his birthday last year, and then via video call this year — due to COVID-19 — again to wish him a happy birthday.

“He kept declining. He didn’t talk anymore,” she recalled.

But in between 1988 and long past his retirement from fulltime ministry in 1998, Issa and Father Soulliere traveled to more than 80 churches throughout the Archdiocese of Miami and as far away as South Carolina for “scapular weekends.”

Father Soulliere would ask pastors for permission to speak at all the weekend Masses to promote the wearing of the brown scapular of Our Lady of Mount Carmel. Issa and a couple of other Legion of Mary members would stand next to him at the end of the Masses, holding baskets filled with scapulars, as he said the blessing and placed them around the neck of all who asked for them.

The baskets were actually “mango boxes from Publix,” Issa said, disguised by her elegant wrapping. “Father called it Operation Mango Boxes,” she recalled. “We did a lot of churches.”

Father Soulliere also served for many years as coordinator of Marian movements and devotions in the archdiocese, as well as spiritual director of the Miami and Broward Curia of the Legion of Mary, which oversee the parish-based groups. He faithfully attended both of their monthly meetings for years, Issa said.

“He was a very nice man, a very good man, a very holy man, a very spiritual man,” said Victor DeBianchi, Jr., a parishioner at Little Flower Church in Hollywood who handled Father Soulliere’s legal affairs. “Whatever he needed, I did. But he was very, very independent until about eight years ago.”

Father Soulliere grew up at Little Flower. He and his family — a mother and a sister, both deceased — lived on Hollywood Beach for many years. He returned there to help with daily and weekend Masses after his retirement. And DeBianchi noted, it’s where he celebrated his first Mass after ordination, and his last Mass on earth.

A late vocation, Father Soulliere obtained a degree in economics from the Wharton School of Finance at the University of Pennsylvania, then worked as a certified public accountant in Florida for many years. He also served in the Navy for a little over three years.

He was one of seven men ordained alongside Archbishop Thomas Wenski in 1976. The archbishop will be the main celebrant of his funeral Mass, set for Thursday, Dec. 31, at 11 a.m. at Little Flower in Hollywood. A viewing will precede the Mass, from 9:30 to 10:45 a.m.

“His was an older vocation but he had a long and fruitful ministry,” Archbishop Wenski said. “Father Soulliere had a deep Marian piety and dedicated much of his priesthood in promoting Marian devotion and the lay apostolate through the Legion of Mary. He served as spiritual director of the Legion of Mary for decades.”

“He was a good man and a good priest, too,” said Bill Edwards, another longtime friend from Little Flower.

“No one’s perfect but he was very close,” added Edwards, who described himself as Father Soulliere’s “friend and chauffer and everything else.” He recalled their daily lunches, and driving the priest to doctor and dentist appointments, grocery and retail stores, and people’s homes.

“He helped a lot of people,” Edwards said, bringing them food and money and the solace of confession. Once a month, they even went shopping for bags of peanuts to bring to another parishioner.

Edwards recalled how Father Soulliere liked to stay fit. “He liked to grind up carrots and drink the juice.” Towards the end, he remembers the priest asking “why God wouldn’t take him. I said, it’s because you treat your body so well.”

DeBianchi noted that Father Soulliere “insisted on perfection.” Edwards described him as “kind of stern.”

“He had a good heart,” Edwards said, “but he shot from the shoulder. He’d tell you just how it was.”

John Richard Soulliere was born April 10, 1923 in Worcester, Massachusetts, but grew up in South Florida. He graduated from St. Patrick Elementary and High School on Miami Beach, and completed his studies for the priesthood at Pope John XXIII National Seminary in Weston, Massachusetts — the only American seminary for men over 30.

He will be buried in the priests’ section of Our Lady of Mercy Cemetery in Doral.

FR. JAMES ELLIOTT O'NEAL - 12/30/2020 09:03 PM
I remember Fr. Dick very well from Pope St. John XXIII National Seminary in Weston, Massachusetts. He was finishing his four years of seminary as I was beginning my four years. We talked as we were both candidates for the priesthood from two Florida dioceses. He was happy to leave the cold weather of Massachusetts in the wintertime. He did great work in the Archdiocese of Miami. He will long be remembered in the archdiocese. God bless him! Requiescat in pace!