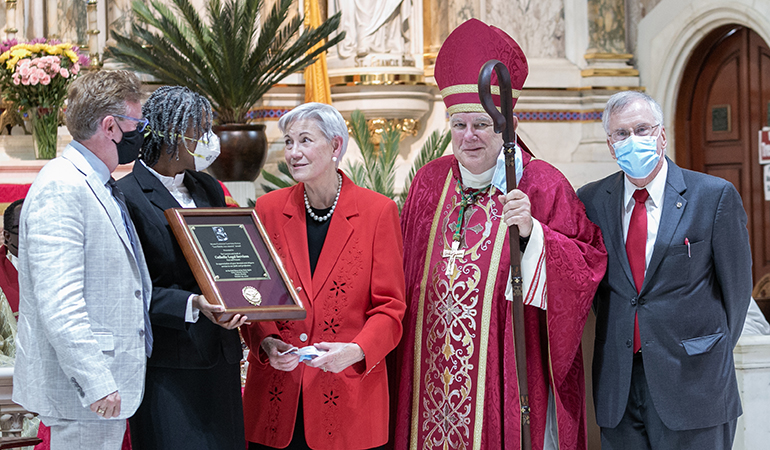 MIAMI | Calling them "doers" and not just "hearers" of God's law of love, Judge Patricia Seitz introduced the honorees at this year's Red Mass: Catholic Legal Services of the Archdiocese of Miami.

Seitz, senior judge for the U.S. Southern District of Florida, presented the Miami Catholic Lawyers Guild's highest honor, the Lex Christi, Lex Amoris (Law of Christ, Law of Love) award, to the team of 30 attorneys plus 60 paralegals and staff who, as she put it, fulfill "God's law of love in action" as expressed in the Book of Exodus: "Do not molest or oppress the alien"; and in the Gospel of Matthew, "I was a stranger and you welcomed me." 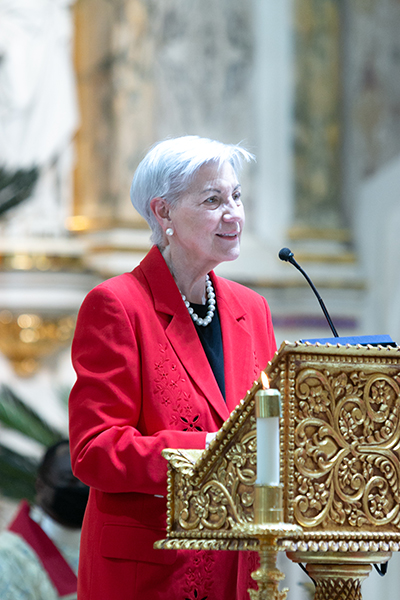 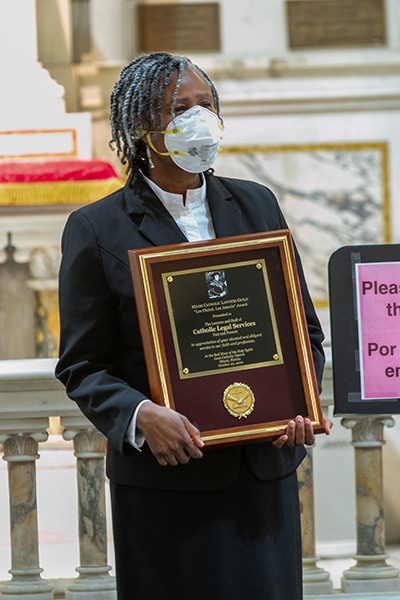 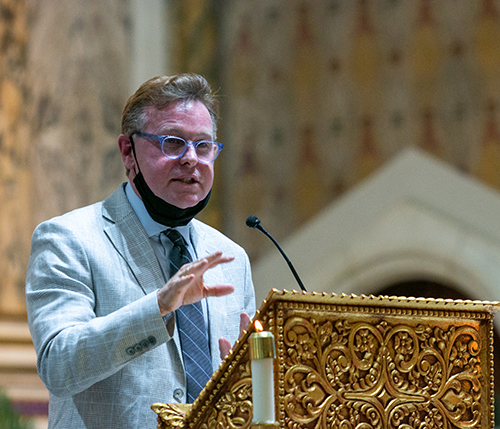 The tradition of a Red Mass dates to the 13th century, when it officially opened the term of the court for most European countries. Participants at the Mass —government officials, lawyers and judges — prayed for the wisdom of the Holy Spirit to guide their work. The term "Red Mass" refers to the color of the vestments worn by the celebrants, which is associated with the Holy Spirit.

"Catholic Legal Services is a doer of God's law of love and not just a hearer," said Seitz, last year's award recipient.

She noted that the agency sees about 1,000 people a month, providing free or low-cost legal representation before immigration courts to those seeking asylum, residency, citizenship, temporary protected status, family reunification, work permits and any other immigration paperwork or advice.

"For those newcomers who don't understand our legal system or speak English, Catholic Legal Services is a godsend," Seitz said, calling the agency "a law firm of a very talented, diverse, passionately dedicated band" of legal professionals.

The agency provides services in Creole, Spanish, English, Portuguese and Mandarin. It refers those who don't qualify for free or low-cost representation to qualified immigration attorneys. And it recruits and trains private attorneys to do pro bono work, most recently representing unaccompanied minors in immigration court.

"Today, there is still a waiting list of nearly 1,000 unaccompanied children needing pro bono lawyers to help them," Seitz said. She praised Catholic Legal Services for "its vital daily service to the poor stranger."

"Justice is not enough," McGrorty said. And mercy "is fundamental to our Catholic faith," as stated repeatedly by Pope Francis.

"God's mercy is infinite and available to all," McGrorty said. "It is through mercy that we, as lawyers, actually serve as Catholic professionals."

While praising the team of lawyers and others who staff Catholic Legal Services' two offices in Miami-Dade and Broward counties, McGrorty also thanked Archbishop Wenski, who "really helped establish us 26 years ago and today continues to be our leading light."

Seitz called them "extraordinarily gifted leaders" with "passionate dedication to immigration services for the poor." McGrorty began working as an attorney with Jesuit Refugee Services in Miami in 1993 and Mezadieu was deeply involved at Notre Dame d'Haiti Mission, providing childcare, elderly care and other assistance to the many Haitians arriving in South Florida. Efforts, Seitz noted, "that were near and dear to then Father Thomas Wenski, now our archbishop."

The Miami Catholic Lawyers Guild is dedicated to fostering spiritual growth and fellowship among Catholic lawyers, judges, law students and others involved in the legal profession.

The guild's president, Francis Sexton, noted: "We believe that lawyers and judges, court clerks, bailiffs, paralegals, messengers, court personnel of all types, engage in this profession, not just as a job, but as a calling, a vocation, to serve our society, our fellow human beings, our country and the rule of law, believing that even when we do our mundane daily legal and judicial work, we do the work of God in serving others."

Guild members meet the third Friday of every month after the noon Mass at Gesu Church.

The title sponsor for this year's Mass was St. Thomas University, which also livestreamed it for those unable to attend.

Sexton noted that 100% of the money collected from Mass sponsors and participants "stays right here to help this humble parish" whose works of mercy include providing daily meals to 60 seniors and other downtown residents, many of them undocumented.