MIAMI | Sitting at his desk while relying on the wonders of modern technology, Father Matthew Gomez pulled off a feat reminiscent of Oscar’s virtual awards night — all to persuade young people to think about their vocation in life, perhaps even a vocation to priesthood and religious life.

The event was Focus 11, canceled last year and held virtually this year due to the COVID-19 pandemic. Father Gomez used the magic of StreamYard to bring a two- hour version of the half-day event into the religion classrooms of sixth graders throughout the Archdiocese of Miami. 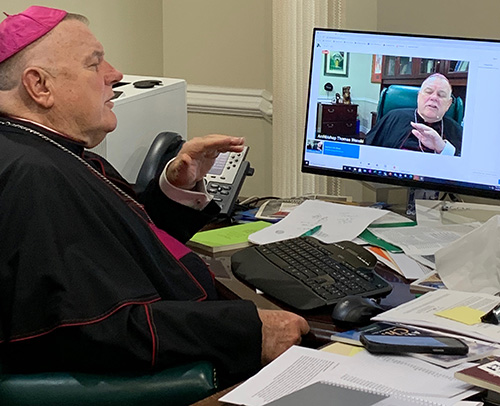 Archbishop Thomas Wenski watches himself speaking to sixth graders from throughout the Archdiocese of Miami during the virtual version of Focus 11, held May 5, 2021. The event's goal is to help young people consider their vocation in general, and a vocation to the priesthood or religious life in particular. Focus 11 was held virtually this year due to the COVID-19 pandemic.

The seminaries themselves were present via pre-recorded video, as the seminarians took the sixth graders on a video tour of each one, peppered with information about seminary life. The students also got a tour of the Pierced Hearts convent and information about the typical day in the life of a novice or consecrated religious.

“Every school participated, but I can’t give you the exact number of how many students there were,” said Father Gomez afterward. “I know that at one point there were 160 devices logged on to YouTube, so probably there were multiple classrooms logged on.”

Some students watched on their individual iPads or laptops, while others watched on big screens in their classrooms.

The technical glitches were minor — a brief loss of sound, a frozen Father Gomez — and mercifully occurred at the end. “Thank you, Jesus!” Father Gomez exclaimed. 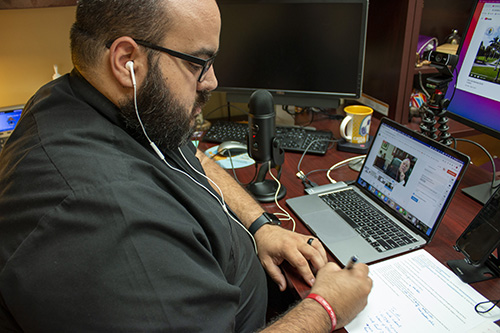 Father Matthew Gomez, archdiocesan director of vocations, takes notes as Archbishop Thomas Wenski speaks to archdicesan sixth graders during the virtual version of Focus 11, held May 5, 2021. The goal of Focus 11 is to help young people consider their vocation in general, and a vocation to the priesthood or religious life in particular. The event was held virtually this year due to the COVID-19 pandemic.

Focus 11 began in the archdiocese in 2012. The event normally takes place over several days, gathering sixth graders from different schools at a church in a geographic middle point. In years past, that has usually meant St. Gregory in Plantation and St. Agatha in Miami, with student groups as large as 600.

The day begins with praise-and-worship songs to get the students prepped, followed by a talk from Archbishop Wenski, games, more talks, and a question-and-answer session with the seminarians and the religious. The event concludes with adoration of the Blessed Sacrament. This year’s virtual event tried to mimic that as much as possible.

Next year, Father Gomez hopes, the sixth-graders’ Focus 11 field trip won’t be virtual. But he admits that, now that it’s posted on the Vocations Office’s YouTube channel, anyone can watch — including homeschoolers and public-school students who attend religious education programs in the parishes.

Father Gomez urged parish catechists to find the YouTube link and “share that with their kids.” (The complete video is also posted at the top of this article.) 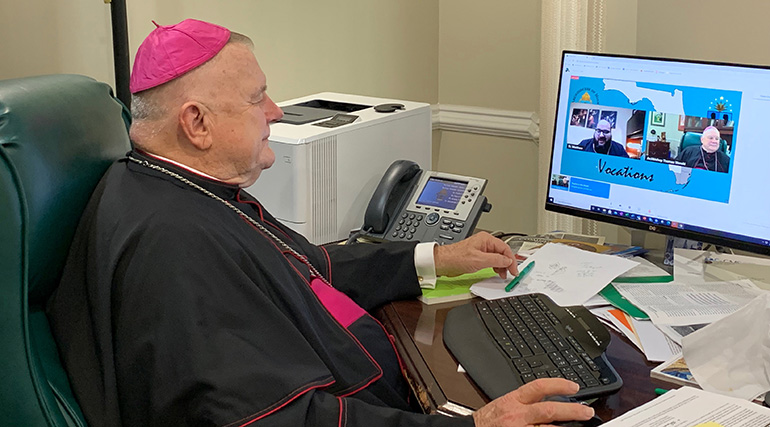 Archbishop Thomas Wenski listens as Father Matthew Gomez, archdiocesan director of vocations, introduces him during the virtual version of Focus 11, held May 5, 2021. Its goal is to help young people, specifically those age 11 or in sixth grade, to consider their vocation in general, and a vocation to the priesthood or religious life in particular. The event was held virtually this year due to the COVID-19 pandemic.

Maria E. Maguire - 05/13/2021 12:43 PM
WOW! Father Gomez, KEEP UP THE GREAT WORK! We are fighting the war aided by modern-day technology. And FIRED UP with the Power of the Spirit! Hope the youngsters who were able to participate will receive the message with open minds and open hearts. Come, Holy Spirit! Blessings, Father Gomez.