The 'Godfather' of Epiphany 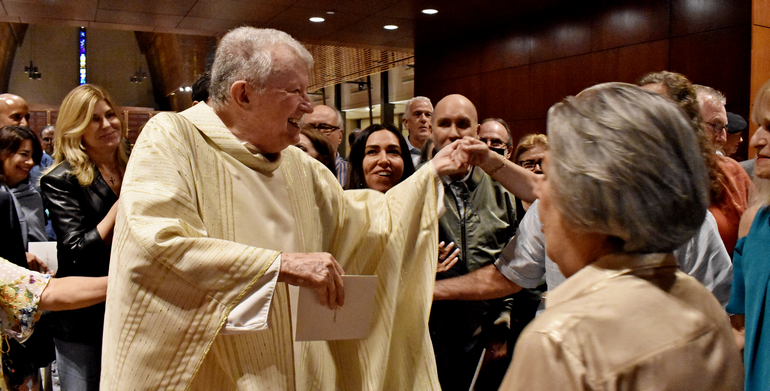 MIAMI | Officially, it was the 70th anniversary Mass for Epiphany Church. But everyone knew the man of honor was Msgr. Jude O'Doherty, who served the parish for more than half of its lifetime.

The monsignor, 80, gave the homily and was the subject of a glowing tribute by the current pastor, Father José Alvarez. And more than once, the congregation burst into applause for him, then lined up for hugs and selfies after the Mass.

He took it all with the genial grace of the Irish-born priest he is.

“I feel like the most fortunate man in the world,” said Msgr. O'Doherty, 80, who served twice at Epiphany – first as an assigned priest, then as pastor. “I'm happy that the people love and accept me. Happy to be with the community.” 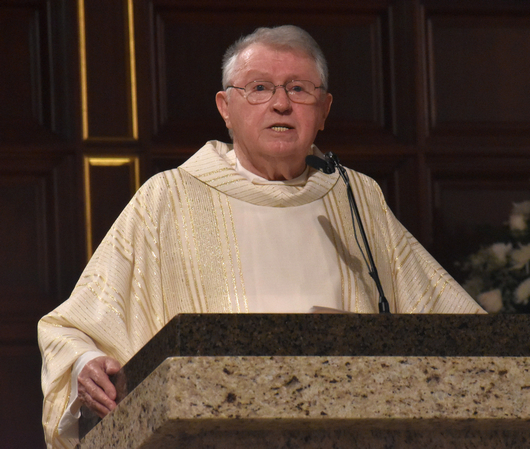 Msgr. Jude O'Doherty gives the homily during the 70th anniversary Mass at Epiphany Church, South Miami. Msgr. O'Doherty served as pastor at the church from 1982 until his retirement in 2019.

About 800 people braved spotty showers Nov. 20, 2021 to attend the Mass. Six priests, all currently or previously serving Epiphany, took part in the procession. Seven beret-topped Knights of Columbus lined the center aisle as a color guard. Providing music was a 24-voice choir supported by a string quartet, trumpet and pipe organ.

Those attending received a 12-page commemorative booklet with a cover of Christ the King, in honor of his feast day that weekend. Besides the readings and music for the Mass, the booklet listed Epiphany’s more than three dozen priests since its founding in 1951.

They included Msgr. O'Doherty, who first came from Ireland’s County Clare to serve from 1965 to 1968 as a parochial vicar (assistant) under Msgr. John O’Dowd, then as pastor from 1982 until his retirement in 2019.

“I tried to follow (Msgr. O’Dowd) in whatever he did, especially in the importance of home and school, and attending Mass every Sunday,” Msgr. O'Doherty said during his homily. “The Eucharist is the center of our faith, our Mass and our life.”

His talk was by turns witty and reverent. He gently twitted his priestly colleagues on their weight and long-winded sermons. He then turned the joke on himself: “There is hardly one of them who talks longer than I do.”

He reflected on Epiphany Church’s name, defined as an insight or revelation. “Everything established here is included in the word. It’s a manifestation of the love of God in Jesus Christ.”

He noted that until 1951, there was no Catholic parish in Dade County south of Bird Road. That year, Bishop Joseph Hurley of St. Augustine, who oversaw all of Florida at the time, granted the request of local laity and appointed Father Donald F. Dailey as Epiphany’s first pastor. 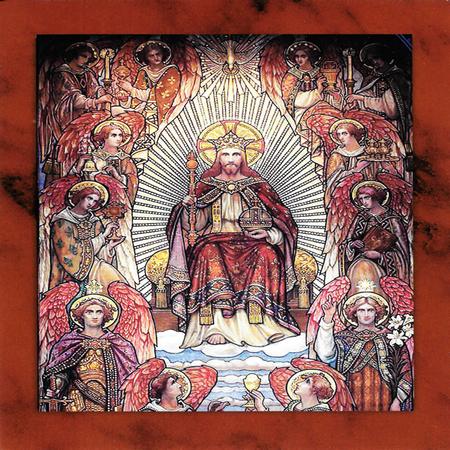 Commemorative booklet for the 70th anniversary Mass of Epiphany Church has an image of Christ the King, in honor of his feast day the weekend the Mass was celebrated.

Msgr. O'Doherty used his homily also to thank the “tremendous contribution” of the Sisters, Servants of the Immaculate Heart of Mary from Philadelphia, who have taught at Epiphany School since it opened in 1953. “They have stamped the love of Christ on many men and women, and prepared them to go into the world and achieve great things.”

The congregation then applauded five beaming IHM Sisters who'd been given front-row seats. Sister Carmen Fernández, president of neighboring Our Lady of Lourdes Academy, said later that they were “touched by the people’s warmth and love for the sisters.”

After the homily, Father Alvarez praised Msgr. O'Doherty for his skill in motivating parishioners.

“He’s the Godfather of Epiphany – he's made so many offers that we can't refuse,” Father Alvarez said, drawing laughs, then applause and cheers for Msgr. O'Doherty.

For his part, the monsignor shrugged off the praise: “What can I tell ya? He never stops.” He then directed the praise toward God. “All our love is for Jesus,” he said.

After the Mass, attendees chatted over drinks and canapes next door in the courtyard of neighboring Epiphany School. Among them was Patrick Burns, who has attended Epiphany for three decades. A Vietnam veteran, Burns suffered for years with post-traumatic stress disorder. Msgr. O'Doherty’s counseling helped pull him through, he said.

“Msgr. O'Doherty saved my life,” Burns said. “When I needed to talk to someone, he was there and gave me peace.”

Also at the reception was Carl Lowell, who joined the church after coming to Florida in 1976. All four of his children graduated from the school, which he praised for its emphasis in both sports and education. 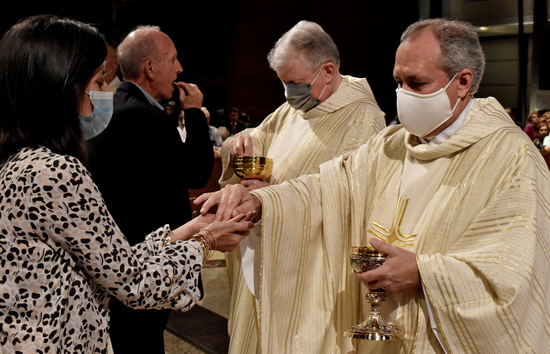 Lowell and his wife are extraordinary ministers of holy Communion, and he has served in Emmaus groups at Epiphany. “Men don’t talk about religion or their feelings,” he said. “Emmaus has helped us with that. And it’s brought back men who have drifted away from religion.”

Asked about a distinctive of Epiphany, Father Alvarez, its pastor since 2019, pointed to the continuity of long-term members working and teaching and worshiping together for generations.

“The sense of tradition here is very strong, especially with the school,” Father Alvarez said. “You see grandparents and parents coming to Sunday Mass.”

“It’s a community,” said Escobar, also a graduate of Epiphany school. “You see a lot of familiar faces that you’ve known a long time. You're always comfortable here. It keeps you coming back.”

“The Church is like an irrigation system,” added Goeser, who has taken part in the church’s Cursillo and Emmaus programs. “The water flows at different speeds, but it all flows to Jesus.” 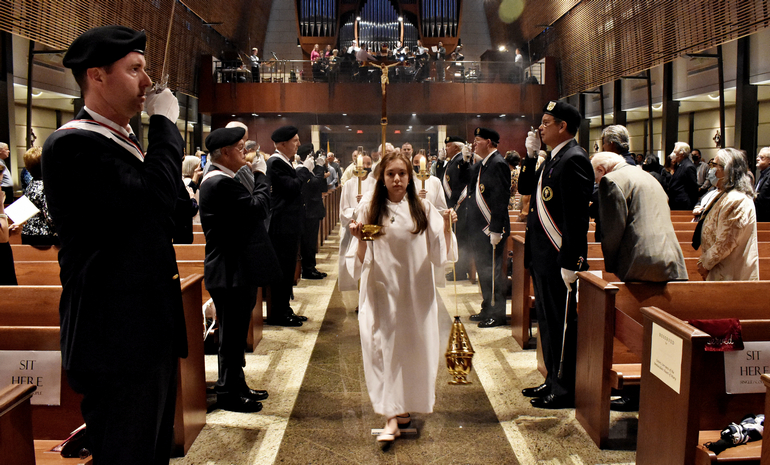 Knights of Columbus form a color guard for the procession during the 70th anniversary Mass at Epiphany Church, South Miami.

Jorge M Diez de Onate - 12/01/2021 05:29 PM
My wife and I served under Msgr. O'Dorhety when he was pastor of Immaculate Conception in Hialeah. To this date we still remember those days. Msgr. was an inspiration and a leader and we are sorry that we moved away from Hialeah and from Msgr. May God Bless him. Thank You.

Carlota E. Morales Ed. D. - 11/30/2021 09:07 PM
Congratulations Msgr. O'Doherty, Father Alvarez, past and present priests,Mrs. Oliva, past and present principals, faculty and staff and parishioners of Epiphany Church. Only those who believe in their dreams can bring them to fruition. The continuing efforts, strong will and commitment to the Lord of this community made this labor of love and faith possible. Enjoy the fruits of your work in this, the 70th anniversary of the founding of your parish. Respectfully submitted, Carlota E. Morales, Ed. D.