Cover your face, wash your hands, keep your distance 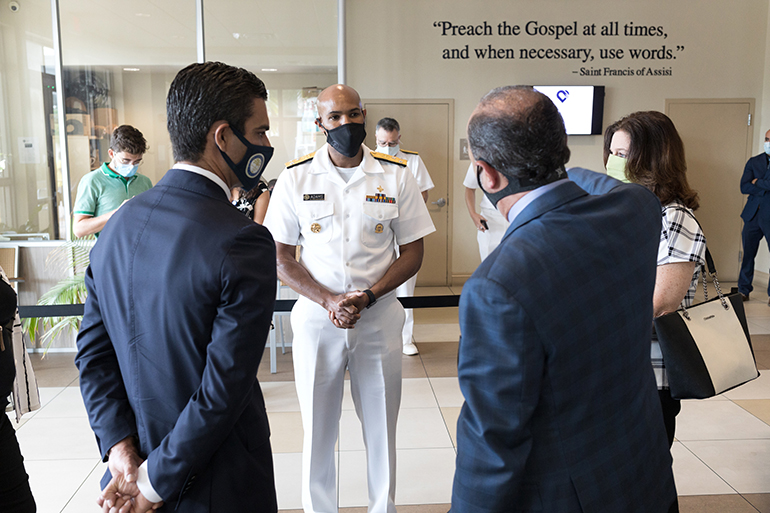 Dr. Jerome Adams, the 20th U.S. surgeon general, visited Miami's Camillus House July 23, 2020. He received a detailed tour of the homeless shelter and its Camillus Health Concern, and led a conversation with community leaders about the pandemic.

MIAMI | Calling the COVID-19 pandemic the challenge of a lifetime, the nation’s top public health official traveled to Florida — a current hot spot — seeking ways to slow the deadly outbreak.

Specifically, he came to learn how one urban community has managed a particularly low incidence of infection among the homeless.

Dr. Jerome Adams, the 20th U.S. surgeon general, took a detailed tour of the Camillus House shelter for the homeless July 23, 2020, to see the array of protocols and health and safety equipment the agency put in place earlier this year.

He then met with community leaders and elected officials to discuss troubling infection rates and hospitalization numbers not only in Florida but in other U.S. hot spots. 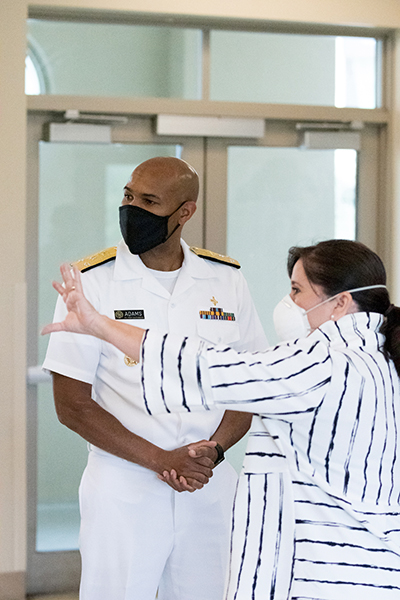 Dr. Jerome Adams, the 20th U.S. surgeon general, talks with Hilda Fernandez, CEO of Camillus House shelter for the homeless in Miami, during a visit to South Florida on July 23, 2020.

Dr. Adams repeated that the key to safely reopening schools, businesses, places of worship, swimming pools and society in general is to tamp down COVID infection rates with three basic tools: social distancing, good hygiene and regular face mask use.

“Reopening at the right point is part of the equation but more importantly is how you reopen, and what I think happened here in Florida and everywhere else across the country is that we reopened like it was the last day of school — everyone ran out but didn't do the things that we know we need to do to prevent the spread of a person-to-person disease,” the surgeon general said.

He attributed the national spike in recent COVID cases to crowds gathered in close public quarters without face coverings and without distancing — and to younger cohorts of silent spreaders.

“We know what works to stop the spread of this disease," Dr. Adams said.

While the world is "on record pace" to develop a vaccine and doctors now have better therapeutics to keep people from dying and prevent long hospital stays, "I would rather prevent you from getting COVID in the first place,” he noted.

As the surgeon general, Dr. Adams holds the rank of vice admiral in the U.S. Public Health Service Commissioned Corps. He oversees the operations of more than 6,000 uniformed health officers who serve in nearly 800 locations around the world, promoting, protecting, and advancing the health and safety of the U.S.

He is an anesthesiologist by training and former health commissioner of Indiana, where he led the state’s responses to Ebola, Zika and the largest HIV outbreak in the U.S., related to injection drug use.

In February 2020, Adams was appointed to the task force for dealing with the COVID-19 pandemic. 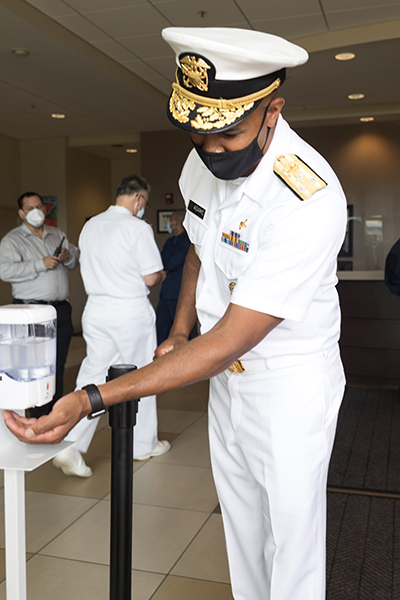 Dr. Jerome Adams, the 20th U.S. surgeon general, utilizes a hand sanitizer station at Camillus House shelter for the homeless and Camillus Health Concern in Miami, during a visit to South Florida July 23, 2020.

In Florida, he said a public health official’s job is to prepare for worst case scenarios and that he does expect another spike in infection rates during the cold-weather months ahead.

“That is why it is important for everyone to remember to wear a face covering, washing your hands and watch your distance,” he said.

The surgeon general also said he is hopeful for a successful vaccine as early as the end of this year but added it need not be a prerequisite to reopening schools and businesses. He cited the relative reopening successes in New York and Italy following a bad course with the pandemic.

But many U.S. states are seemingly heading in the wrong direction. The upward growth rate of the infection is reaching a critical point that may make it impossible to do effective COVID testing.

The surgeon general pleaded with community leaders to do what they can to slow the pandemic.

He said the Centers for Disease Control has sent a team to Miami to explore what is working well and what needs improvement — and how to provide federal support for measures that are working to slow the spread of the infection.

“We also are going to be opening up a third testing site here in Miami because we know that (testing) turnaround times are increasing because demand is increasing,” Dr. Adams said.

“At some point there will never be enough testing if we don’t get control of the disease,” he said. “A test result is only as good as the time it takes you to get it because we can’t effectively quarantine someone for 14 days, particularly when you look at the (homeless) population that is served here.” 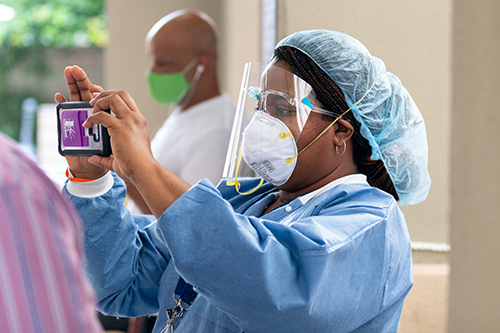 A healthcare worker at Camillus House shelter for the homeless in Miami documents the July 23, 2020 visit of Dr. Jerome Adams, the 20th U.S. surgeon general. He visited Miami to tour the shelter and lead conversation with community leaders about the COVID-19 pandemic.

The federal government is sending rapid, point of care COVID tests that can be given to nursing homes, homeless shelters and other places known to be at the highest risk for the spread of disease.

“And we are helping people think through pool testing so that you can test four people at a time instead of one person at a time,” he said.

A native of Maryland who has spoken about substance abuse and homelessness issues among his own siblings, Dr. Adams also asked political and community leaders for help enlisting local celebrities, online influencers, professional athletes and others to help make mask-wearing cool and acceptable to young people.

“My 16, 14 and 10-year-old couldn’t care less that I am the surgeon general of the United States — they still think that dad doesn't know anything,” he said. “But by golly if their favorite YouTuber or NBA player or singer wears a mask with a funky design on it, they will think it's cool. We need to market that to the people who are spreading the disease right now.”

Dr. Adams said he wants young people to consider that they and their friends may be spreading the pandemic — and putting extended family members in danger — whenever they disregard health and safety measures.

He also said it’s important to acknowledge people who are doing the right things and to offer positive reinforcement.

“Imagine how much more progress we could make and how many more things we could keep open up if we all did the right thing,” the surgeon general said. “You need to wear a face mask now — if you want schools open, we can lower the background community rate.”