Fears subside that COVID-19 will decimate the homeless

While keeping up their guard, Miami homeless shelters say they are not seeing runaway illness 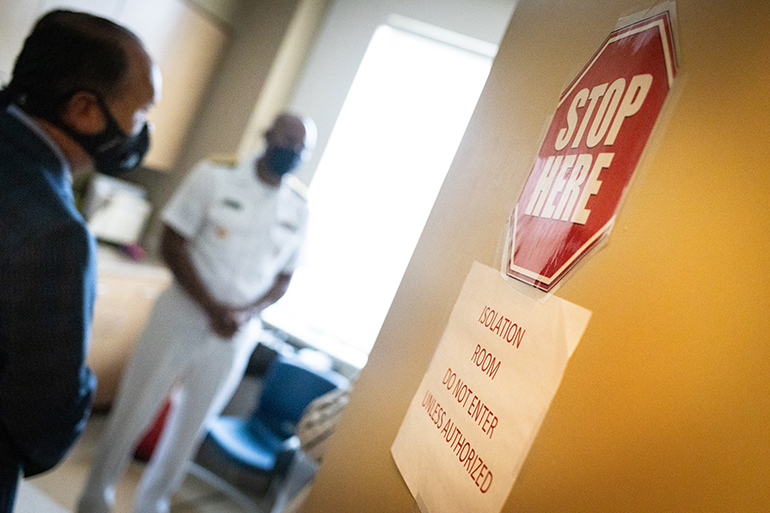 Dr. Jerome Adams, the 20th U.S. surgeon general, tours a clinical room at Camillus House shelter for the homeless in Miami, during a visit to South Florida on July 23, 2020. The surgeon general received a detailed tour of Camillus House and Camillus Health Concern and led a conversation with community leaders about the pandemic.

MIAMI | Some good news on COVID-19: Agencies working with the homeless say their earlier fears about a runaway spread of the illness have not materialized.

While COVID-19 is spreading at alarmingly high rates throughout the sunbelt, especially among young people, the infection rate among the homeless doesn’t seem as high, according to Hilda Fernandez, CEO of Camillus House.

She spoke during the U.S. surgeon general’s July 23, 2020 visit to the downtown homeless shelter, prior to guiding Dr. Jerome Adams on a detailed tour of the Camillus campus. 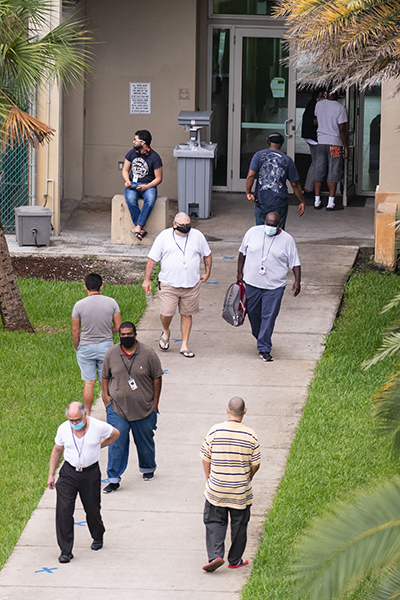 Residents, staff and guests at Miami's Camillus House shelter for the homeless in Miami move through the shelter's courtyard during a visit of the U.S. Surgeon General, Dr. Jerome Adams, July 23, 2020. 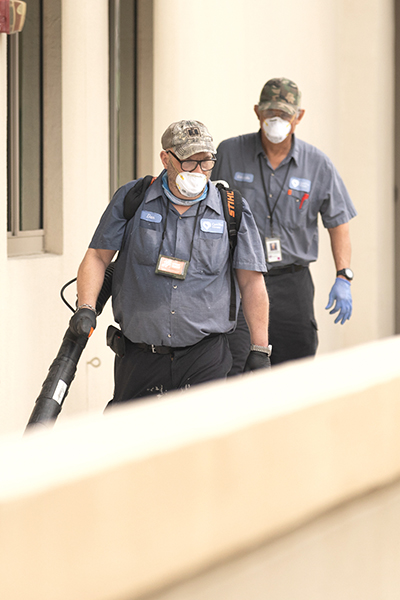 Staff members at Camillus House shelter for the homeless in Miami sanitize the facility in advance of the July 23, 2020 visit of Dr. Jerome Adams, the 20th U.S. surgeon general.

“We have been so busy all that time preparing for how to keep our clients safe and the model that we have in place has been a really good model: We have had a very low infection rate among a very dense congregate residential setting,” Fernandez said.

The surgeon general was in Florida to find out what agencies like Camillus were doing to contain the COVID-19 outbreak among vulnerable populations and to call for better management of the pandemic across the board.

Camillus House is a full-service center, spread across a series of buildings that offer a comprehensive system of care for the poor and homeless.

“In the first three months I think we had only three people (test positive), and then once everything started reopening our clients were pressing us to give them a little bit more freedom and we started issuing passes,” Fernandez said. “We found that within weeks all of a sudden we had triple the number of people who had been infected.”

In response, Camillus staff have re-implemented tough measures about who can leave campus and for what reasons. Even those residents with doctors' appointments are being asked to push them back two or three weeks until the Miami region shows improved containment of the pandemic.

“We feel fairly confident that we are keeping our facility clean and infection-free; we cannot control everything anybody touches when they leave our campus,” Fernandez said.

Ronald Book, chair of the board of trustees for the Miami-Dade County Homeless Trust, told the surgeon general that coordinated efforts in the community have kept the coronavirus illness in check among the homeless.

“We have had only 93 positive instances of COVID-19 within our entire continuum — that’s the sheltered and unsheltered,” Book said, adding that he is aware of only four COVID-related deaths among all the clients associated with the Homeless Trust.

When you compare those numbers against those of other urban communities across the country, Miami-Dade has done its job well, he added.

“The way to reach them is to speak directly to the (homeless) community in English and Spanish and (Haitian) creole of the importance of wearing your mask and to continue to wash your hands frequently,” Book said. “But for that we might have a whole lot bigger mess on our hands than what we have now.”

Katherine Martinez, director of emergency and community housing at Camillus House, said special teams have reached out to people living on the streets to conduct COVID-19 testing and public health awareness.

For his part, Dr. Adams said he cares deeply about the impact of the pandemic on the homeless in general, and that he doesn’t want to see pre-existing conditions and hardships worsen among them as a result of the havoc being caused by the illness.

“We hope people can come out of this not just ok but on a pathway to being healthier, to being self-sufficient and more resilient down the road,” said Dr. Adams, who has also been advocating greater control over the opioid crisis.

“I appreciate the preemptive strategy that you employ (here) and the desire to give people a pathway to become their most successful selves.”