A summer pilgrimage to St. Augustine

Catholic history in the U.S. started here, including devotion to Our Lady of La Leche 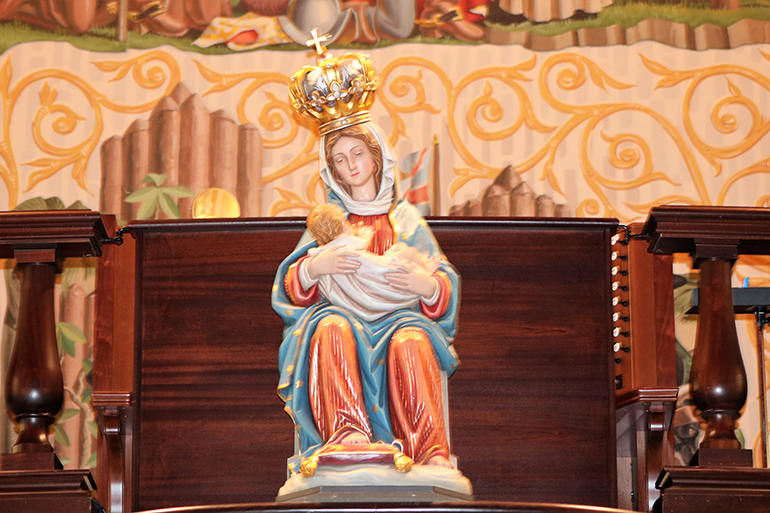 An image of Our Lady of La Leche which honors Mary, patroness of mothers-to-be, is displayed in the Cathedral Basilica of St. Augustine. A national shrine in her honor is located on the grounds of Mission Nombre de Dios nearby.

ST. AUGUSTINE | Every summer, I get the bug to get away to see the world and explore new things, but for about 15 years, I have gone a different route: taking religious journeys to holy places for a more meaningful experience.

The whole idea of making a pilgrimage is to get away from stress and anxiety. It is a journey of faith to sit quietly in God’s presence, grow spiritually and honor the Lord.

So in June, with the pandemic waning and people beginning to get out and about again, I did some soul-searching and research, made plans and headed out of town. 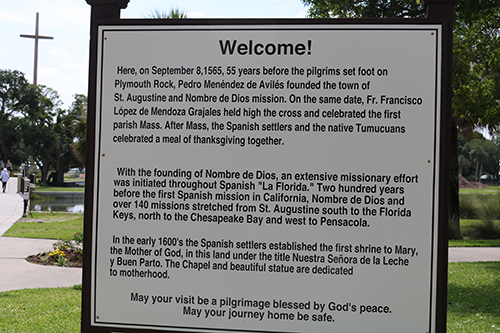 A sign at the Mission Nombre de Dios, where the national shrine of Our Lady of La Leche welcomes visitors. 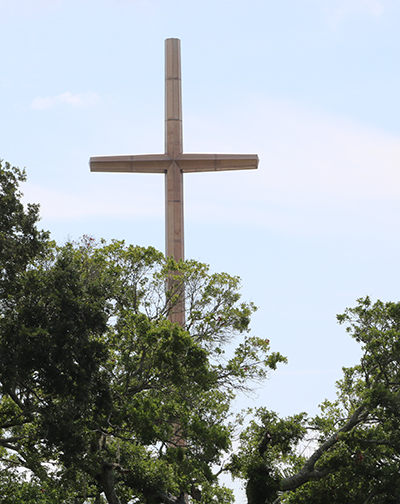 A 208-foot cross towers in the sky and marks the spot where Spanish explorers came ashore and founded St. Augustine, the home of the first Catholic parish, church and Marian shrine in the U.S.

International travel was out even though I am fully vaccinated. Travelers are still at risk of getting and spreading some COVID-19 variants. Then, there are the different restrictions from country to country. This year, car was the way to go. No airports. No waiting in long security lines. No layovers, delays or face masks.

I headed to St. Augustine, the nation’s oldest settlement, where research revealed more than six million tourists visit annually. The city’s website reads, “A visit to St. Augustine is more than just a getaway. It’s a vacation close enough to home but different enough to make you feel a world away.”

Tourists go for the beaches, attractions, entertainment and dining, but a few calls to the Diocese of St. Augustine revealed that the town dates back more than 450 years, with Catholic points of interest woven throughout the city. It is even recognized as the oldest pilgrimage site in the United States.

Over the decades, large numbers of clergy, religious and laity from around the world have made their way to St. Augustine. I had a firm sense Jesus was calling me there because everything fell perfectly in place, including finding a suitable place to stay.

One publication made note that a traveler will find more than 3,000 hotels, motels and inns in St. Augustine. As a pilgrim, I wanted an alternative accommodation.

WITH THE SISTERS OF ST. JOSEPH

Villa Flora in the historical district was built in 1898 as a winter home for a seasonal resident. Over the years, space was added, and in 1975, the building served as a formation house for the Sisters of St. Joseph of St. Augustine, whose motherhouse, built in 1874, is located across the street. These women have served in Florida for 155 years, teaching, helping parishes, serving the elderly and passing on the faith. 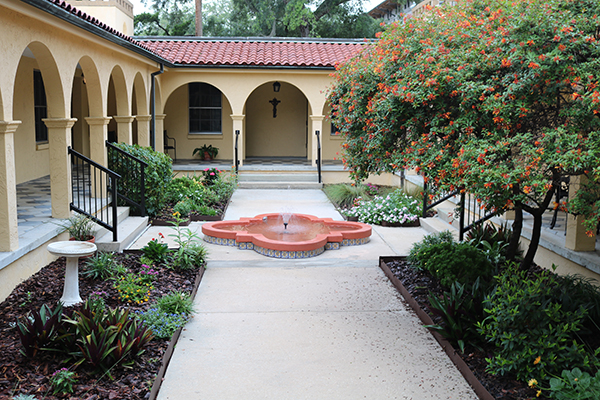 St. Joseph Renewal Center in St. Augustine's historical district offers a quiet, safe place for prayer, reflection and renewal. The facility is operated by the Sisters of St. Joseph of St. Augustine.

The villa, now known as St. Joseph Renewal Center, would be my home during the pilgrimage. It had everything: cozy rooms with a bath, quiet spaces for reading and a chapel for prayer. Meals are available for a small charge, and I took advantage of the opportunity for one-on-one spiritual direction with one of the sisters.

Sister Jane Stoecker and Sister Florence Bryan greeted me when I arrived. Their friendly faces were familiar because both had served in South Florida, my stomping grounds. Sister Stoecker, retreat administrator, was principal of St. Mary Cathedral School in the Archdiocese of Miami for 20 years. Sister Bryan, her assistant, is formerly of St. Edward Parish in the Diocese of Palm Beach.

Once behind the villa gates, I knew I had made the perfect choice. There were no televisions. No phones. No Internet. Only the sounds of a flowing fountain in the garden, singing birds and, at times, the faint sound of the cathedral bell a couple of blocks away.

The sisters gave me the keys to my room and the gate. They invited me to make myself at home and encouraged me to explore the center’s 5,000-book library, a treasure trove of religious, historical and educational publications. What a treat.

Sister Stoecker gave me a brochure with a map and list of 14 different Catholic sites. My pilgrimage plan was to cover as many of the sites as possible, but the main priority was prayer. So I made an itinerary, and the next day, set out to the oldest Catholic site on the list. 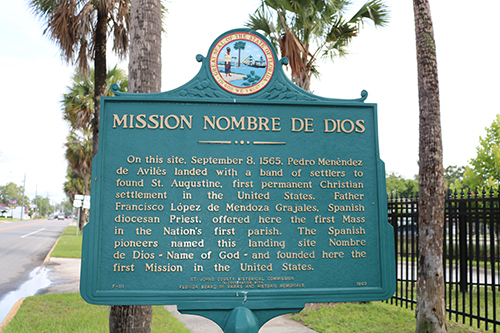 A state marker details the history of Mission Nombre de Dios where Spaniards came ashore and founded St. Augustine. It is here where the first Mass was celebrated and the first Catholic church and Marian shrine were built.

The site marks the spot where Spanish explorers landed Sept. 8, 1565, founding the city which they named St. Augustine in honor of the saint on whose feast day they sighted land. With boots on the ground, the first thing the men did was fall to their knees giving thanks to God.

The next thing they did goes down in the Church’s history books. The Spaniards celebrated Mass. Father Francisco Lopez de Mendoza Grajales, who was traveling with them, celebrated the first Mass on American soil. A 208-foot cross erected at the location reminds visitors of this history.

“The roots of Christianity and Catholicism began here,” said Mackenzie Tucker, who visited St. Augustine six years ago and fell in love with it. Today, he resides in the city and works in development for the mission. “My visit opened my eyes,” said Tucker.

The Spaniards established the first faith community in the United States and built the first Catholic church at the mission. In 1609, they brought their love of Our Lady of La Leche with them and built a shrine on the grounds to honor Mary. 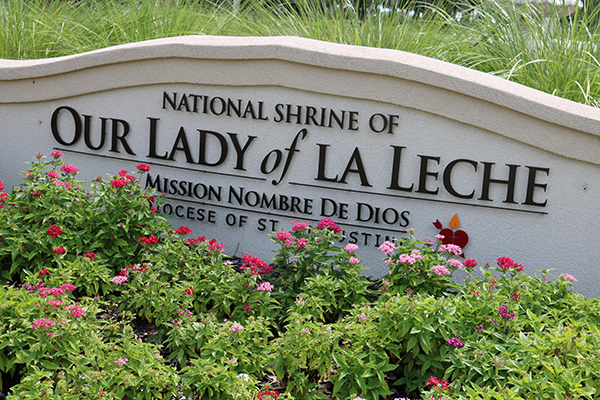 A sign at the entrance to Mission Nombre de Dios reminds visitors that the grounds hold the National Shrine of Our Lady of La Leche along with the church.

The shrine, elevated to national status in 2019 by the U.S. Conference of Catholic Bishops, is recognized as the first Marian shrine in the United States. Pope Francis declared Oct. 11 Our Lady of La Leche’s feast day in 2012, and he also granted permission for a rare canonical coronation to take place after becoming aware of the great numbers of people coming to venerate her in St. Augustine.

According to Tucker, the crowning was supposed to take place last year during the diocese’s 150-year anniversary. It was postponed due to the pandemic and is set for Oct. 10 of this year. The event will mark only the fourth canonical coronation in the United States.

My day at the mission grounds was a blessing. The opportunity to celebrate Mass and spend time in adoration at the spot where the first Eucharistic celebration in the United States took place was a memorable experience.

At the shrine, whose image represents Mary nursing the infant Jesus, my prayers went up for the unborn and for my niece, who was expecting her first child this summer. I noticed several soon-to-be mothers praying at the shrine. One attended Mass at the church and asked the celebrant for a blessing.

During the next days, I walked the brick streets of the historical district and visited the Catholic places, praying and reflecting on the early days. I prayed for the settlers, who brought the faith from Spain to America, and for the missionaries who established the first hospital and school. The Franciscans were among the missionaries who came to teach Christianity to the indigenous people of the territory. Many were martyred. 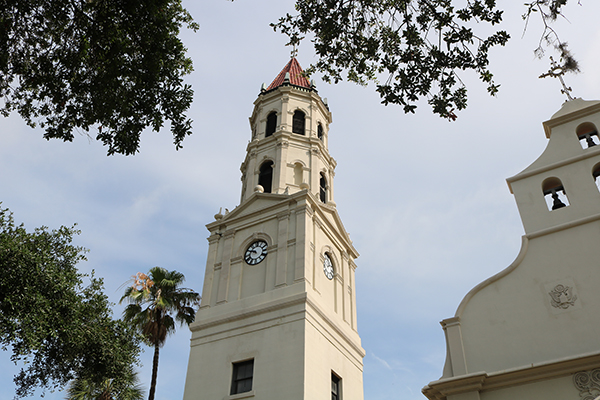 The Cathedral Basilica of St. Augustine is located in the heart of the city and visited by people from around the world. It is the oldest active Catholic faith community in the United States, founded in 1565.

I celebrated daily Mass at the beautiful Cathedral Basilica, a centerpiece of the city constructed in 1797. The church became a cathedral when the diocese was established in 1870. Once Florida’s mother diocese, the Diocese of St. Augustine was carved into six additional dioceses as the state developed and the Catholic population continued to grow.

I was dazzled by the beauty of the old church, and I got goosebumps thinking about the generations of faithful, including bishops, priests, religious and families, who had sat in the pews praying, attending celebrations and honoring God.

My pilgrimage trip was much too short. I learned a lot and made memories. Most importantly, I felt the Lord’s presence not only at the places I visited but through the people, including the religious sisters, I met along my journey. My faith was strengthened.

Peaceful, prayerful, spiritual and grace-filled are the words I use to describe this personal pilgrimage. I knew that this is where God wanted me to be, and I already find myself wondering when I will find time to go back to pray, worship and honor him. 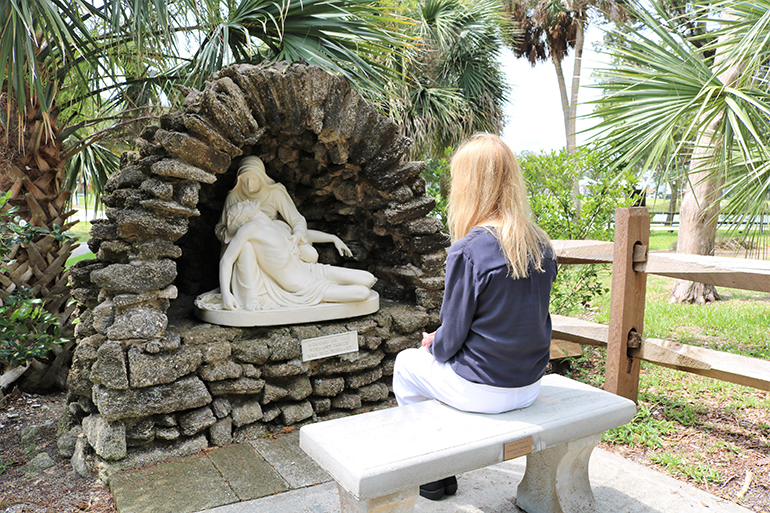 Reporter Linda Reeves prays in front of one of the statues on the grounds of the Mission of Nombre de Dios in St. Augustine, also the site of the Shrine of Our Lady of La Leche. The mission grounds feature beautiful statues, the shrine and reminders of the early Church of Florida.