Another Bahamas humanitarian cruise to sail this weekend 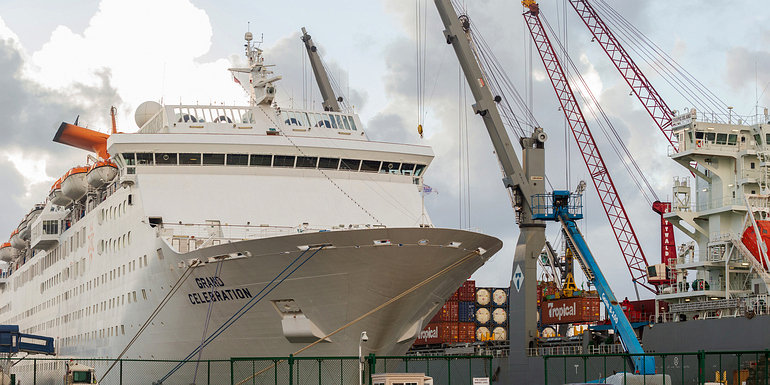 Port of Palm Beach-based Grand Bahama cruise ship stands ready to for its second Bahamas humanitarian cruise set to sail this weekend delivering American aid and first responders before returning to Florida with more Hurricane Dorian evacuees. The ship's parent company, Bahamas Paradise Cruise Line, said this week it is canceling its Sept. 13, 15, 17 and 19 tourism trips on the Grand Bahamas in order to accommodate one or more additional humanitarian cruises this month.

Last week, the Grand Celebration cruise ship arrived at its home port in West Palm Beach with some 1,100 Bahamas residents who were evacuated at Freeport. They were made homeless by Hurricane Dorian's impact, mainly on the Abaco Islands and Grand Bahama.

Meeting them in West Palm Beach were workers with Catholic Charities U.S.A., along with United Way, American Red Cross and Discover the Palm Beaches, which acts as a convention and visitors bureau.

The ship’s parent company, Bahamas Paradise Cruise Line, has canceled its Sept. 13, 15, 17 and 19 tours of the Bahamas in order to launch more humanitarian cruises, according to spokesperson Adrianne Richardson.

But another tropical depression was moving this weekend toward the northern Bahamas region — still reeling from the historically powerful, Category 5 Hurricane Dorian — and expected to continue to Florida through Sunday. The tropical depression may bring heavy rains and 35-mph winds to the storm-weary Bahamas.

If the humanitarian mission isn’t postponed, it is expected to bring up to 350 skilled volunteers, large generators for several areas in the Bahamas, hundreds of tons of supplies and 30 to 50 licensed electricians.

"We understand the lifeline it brings to residents across the islands," Oneil Khosa, CEO of the cruise line, said in a statement. "Grand Bahama is our home away from home. We are committed to providing aid to our brothers and sisters there."

Paradise's website notes that all persons returning to Florida must have a valid unexpired government issued passport and visa. Exactly who could leave the Bahamas and enter the United States has been a matter of confusion and frustration since the hurricane.

Earlier this week, the U.S. Department of Homeland Security said Bahamians arriving to the United States by sea needed a visa. Later, it was reported that the U.S. would not grant temporary protected status (TPS) to people from the Bahamas displaced by Hurricane Dorian.

TPS status would allow Bahamians to work and live in the U.S. until they could safely return home, as did many victims of Haiti’s 2010 earthquake. Some 300,000 people from around 10 countries are reportedly living in the United States under the program.

Meanwhile in the Bahamas this week, the government has announced a database of missing persons following Hurricane Dorian. The number recently stood at 1,300, down from a preliminary figure of 2,500 missing persons a few days earlier, while the official death toll from Dorian reportedly stood at 50 persons.

After hovering over the Bahamas Sept. 1-3, the storm made many homes in the northern Bahamas region uninhabitable and left an estimated 10,000 people needing immediate assistance.

Storm evacuees to the nation’s capital of Nassau on New Providence Island has reportedly begun to strain resources there as the government struggles to house and care for thousands of arrivals. One of the largest shelters has reportedly reached its capacity of 1,500.

Meanwhile, the Bahamas is issuing statements that most of the rest of the nation remains open for tourism, which accounts for more than half of the country’s economy.

“Now is perhaps the best time ever to visit The Bahamas. Every trip, from a friends’ getaway to a business conference, will help the country’s effort in rebuilding the affected islands,” reads a statement from the Bahamas website.

“Many of the more than six million people who visit the Bahamas each year spend their time on Nassau and Paradise Island, which were not impacted.”