The Cuban Adjustment Act can work for other immigrant communities

Archbishop Thomas Wenski states at a conference on immigration reform 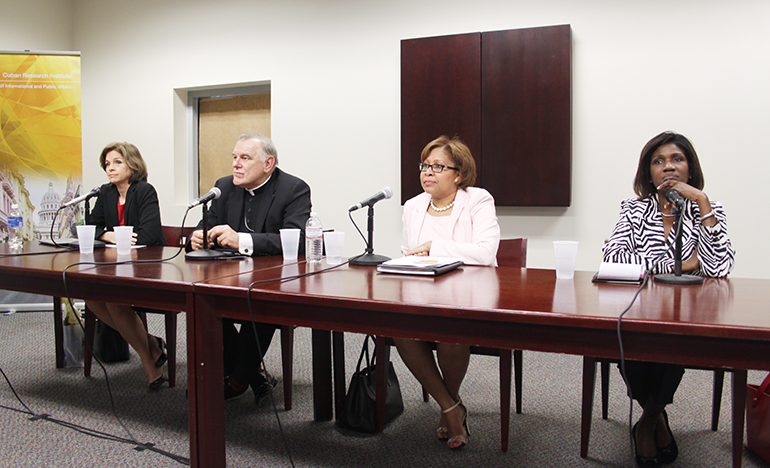 MIAMI | Like many young people from Central America, Julio Calderon immigrated illegally to the United States along with his twin brother and a younger brother, looking to be reunited with their parents and fleeing the violence in his native Honduras.

“When you are older than 15, gangs are trying to recruit you, and it was very hard to see a person die every day,” he said.Their journey lasted about 25 days. They passed through Guatemala and Mexico. “Sometimes without anything to eat, other times they wake you up at two in the morning,” he said. They had to walk in complete darkness, keeping quiet to avoid being spotted by their foreign accent and deported. 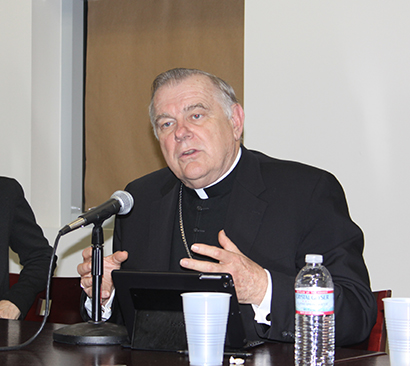 Archbishop Thomas Wenski takes part in the panel discussion on immigration reform hosted by FIU and organized by university groups including the Cuban Research Institute, the Center for the Humanities in an Urban Environment, the Latin American and Caribbean Center, and the Exile Studies program. 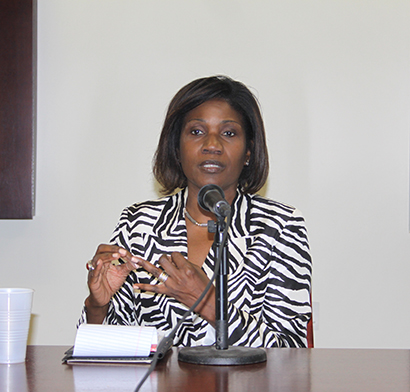 Gepsie Metellus, executive director of the Sant La Haitian Neighborhood Center, was one of the panelists at the FIU-sponsored discussion on immigration reform. 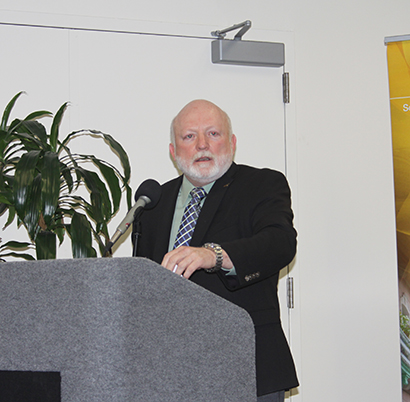 Jorge Duany is director of the Cuban Research Institute at FIU, one of the organizations that organized the panel discussion on immigration reform. 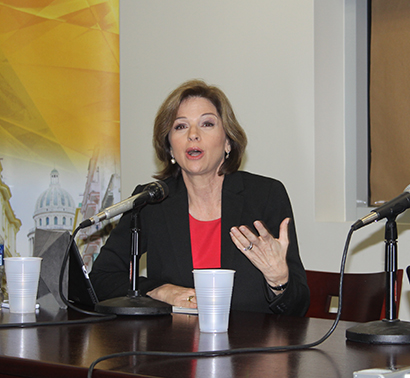 Helen Aguirre Ferre, journalist and political analyst, was one of the panelists for the immigration reform discussion hosted by FIU. 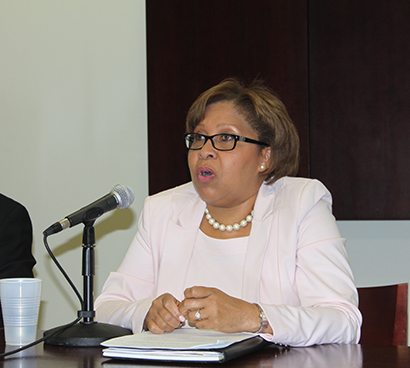 Nearly 10 years later and settled in South Florida, Calderon is in his final year of Economics and Political Science atFIU (Florida International University). He is planning to go to law school so he can become, in 15 or 20 years, the first Florida state representative from Central America.

But Calderon’s plans are at risk of not becoming a reality because he arrived in the United States 30 days after turning 16, which makes him ineligible to receive the benefits of the Deferred Action for Childhood Arrivals program, DACA.

“I felt very sad,” Calderon said when he learned that he was not eligible for the DACA benefits, but “I will keep studying even if I don’t have the opportunity to obtain documentation.”

The immigration issue “has a very large impact on this university, where two thirds of the students are Latino, many of whom are immigrants and are in irregular status,” said Jorge Duany, director of the Cuban Research Institute at FIU.

The institute was one of the organizers of a panel discussion entitled “Multiple Perspectives on Immigration Reform,” which was held March 18 at the University. Among the participants were organizations affiliated with FIU: the Center for the Humanities in an Urban Environment; the Latin American and Caribbean Center; and the Exile Studies program, among others.

“What we need to do and we cannot do without the support of Congress is to fix the broken immigration system,” said Archbishop Thomas Wenski, one of the panelists.

“The Cuban Adjustment Act should serve as an example of how we should treat immigrants, because Cubans have been the most successful immigrant group in American history,” the archbishop said. “Aside from their own talents, one of the reasons is the Cuban Adjustment Act, under which they can obtain legal residency after a year of being here, and citizenship five years later.”

Because Cuban immigrants benefit from this law, “we should not ask that they be abused like the rest; we should treat everyone as well as we treat Cubans, because if the Cuban Adjustment Act works for Cubans, it can work for everyone else,” the archbishop added.

Immigration attorney Dahlia Walker-Huntington, who was also a panelist, said that immigration reform is important even for non-immigrants, because the millions of undocumented contribute financially to the country every day, even though do not even have drivers’ licenses.

“They drive because they have no other choice. They work and take their children to school; they are uninsured and they put me and you in danger,” she said.

Meanwhile, Helen Aguirre Ferre, journalist and political analyst, said both parties should come together and do something to help the country.

“In a short period of time, 40 percent of the workforce will be Hispanic. Minority communities (African Americans and Hispanics) have more children than whites. From an economic perspective, it makes sense,” she added.

The panel also discussed the reasons why people migrate to the United States.“It's not an easy decision, no one makes such a decision lightly,” said another panelist, Gepsie Metellus, executive director of the Sant La Haitian Neighborhood Center.

Referring to Haitian immigrants, she said that the conditions in which they make the trip are not like taking a cruise; to date, the number of people who have drowned at sea is unknown.

Contrary to the popular belief that undocumented people arrive by boat or walk across the border, “the reality is that most undocumented immigrants entered with visas. But there must have been a powerful reason that made them decide to board the plane that brought them here, leaving everything behind; there must be a powerful factor that is causing them to leave,” Walker-Huntington said.

“The appeal of coming to America is that everyone wants to live the American Dream, or wants to have an education or the opportunity to be who they want to be,” she added. “The United States is the only country in the world where you can be born in a shelter, and if you put your mind to it and work hard, you can become the president of this university. The opportunities we have here are better than anywhere else.”

The millions of undocumented workers “are already part of American society; even if they have no legal status, they have children and spouses who are U.S. citizens; they are integrated into our society,” Archbishop Wenski said. “They should be given legal status. If we leave them out, we are creating a new lower caste, which is easily exploitable because they have no legal protection.”

Archbishop Wenski said that the U.S. bishops support the executive action announced by President Barack Obama on November 2014 â even though it is temporarily suspended due to a ruling by a judge in Texas, who said that the president overstepped his executive powers. 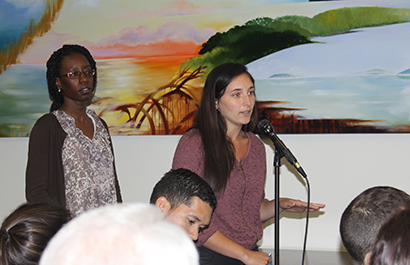 The presidential decree extended the DACA program â deferred action for immigrants who entered the country when they were younger than 16 â and created DAPA, a deferred action program for parents of citizens or permanent residents of the United States. This benefits five million undocumented persons, so they can live and work legally in the United States for three years, but without access to residence or citizenship.

“It is a good temporary measure for some immigrants, but it is not a permanent solution. We continue to fight for immigration reform,” stressed the archbishop.He added that for over 10 years, the Conference of Catholic Bishops has been insisting on a comprehensive immigration reform that will give citizenship to over 11 million undocumented immigrants who are in this country. They also seek family reunification for the unaccompanied minors who are crossing the border; and giving legal status to those working in service industries and agriculture.

For his part, Calderon, who is also an activist with Students Working for Equal Rights (SWER), the Immigrant Coalition of Florida, and the Dream Defenders FIU, said that despite the suspension of the executive action, those organizations are preparing to implement DACA and DAPA. They will start offering clinics and visiting schools to inform the undocumented students that it is possible to attend college.

"When you're an activist, you are not only working for yourself but for other people, and the fact that other people have obtained a work permit is also nice," said Calderon. 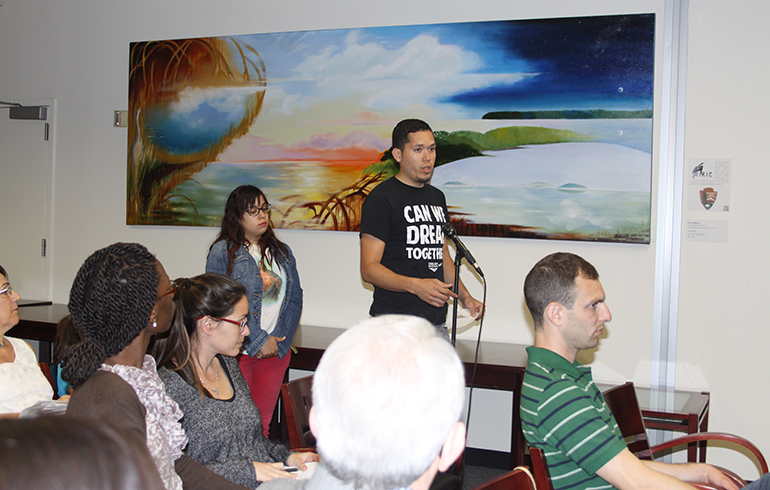 Julio Calderon, an immigration activist and undocumented student at FIU, asks about the situation of unaccompanied minors who are crossing the Texas border into the U.S. - since he was one of them - during the panel discussion on immigration reform hosted by the university.