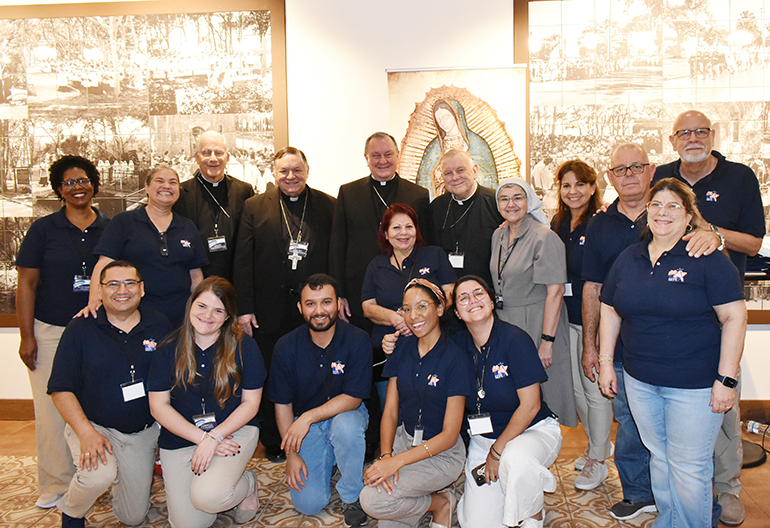 In the picture, SEPI and Hispanic ministry leaders from the southeastern United States pose with bishops who participated in the XVIII Regional Encuentro, held Oct. 12-15, 2022 in St. Augustine, Florida.

MIAMI | In 2012, when Olga Villar started as director of Hispanic pastoral ministry in the Archdiocese of Mobile, Alabama, she had a cultural awakening.

“I didn’t realize I was Hispanic until I got to Mobile,” she said, pronouncing it Moh-beel. “I was the only person that spoke Spanish at the chancery office.”

According to the 2020 U.S. Census, more than 70% of Miami’s population identifies as Latino or Hispanic. The city is a sanctuary of sorts for Spanish-speaking immigrants who continue to arrive from the Caribbean, Central and South America, and beyond. In other parts of the country, that is not the case. Hispanics immigrants are still a minority. But the Catholic Church knows. 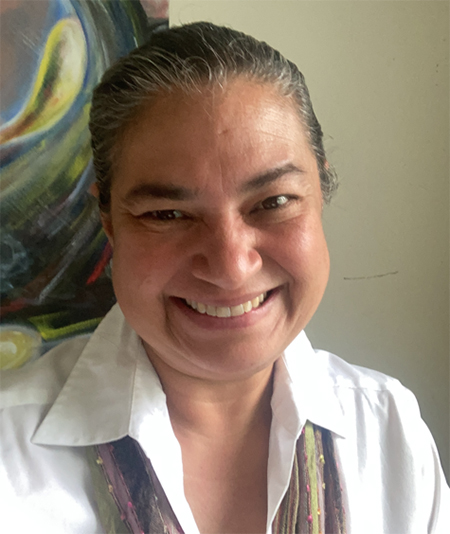 “It’s always been a Church that has embraced immigrants, and faith is at the core of it,” said Villar, who was born in Colombia and came to Miami as a teenager.

Since 1978, the Southeast Regional Office for Hispanic Ministry has helped nine southeastern states, and the 30 dioceses within them, to identify Hispanics and make them feel welcome in the Church, as well as offer formation to Hispanic lay leaders.

The Southeast Pastoral Institute, better known as SEPI, is the educational branch of the regional office. It began in 1979, two years after the II National Encuentro of Hispanic Ministry, to provide education in theology and pastoral ministry, as well as leadership formation programs, for Hispanic laity, youths, and young adults.

Villar was 17 when she first came across SEPI and joined its Pastoral Juvenil (youth ministry). Now, she is the first lay woman to lead SEPI as its executive director.

“I’m very blessed to be where I’m at now, but I think that I have also cosechado, or harvested, much of what has been done by the previous leaders,” said Villar.

Among them, she credits Piarist Father Mario Vizcaino, the founder of SEPI, and the first team of leaders who traveled across Florida, to Alabama, the Carolinas, Georgia, Kentucky, Louisiana, Mississippi, and Tennessee in a small, beat-up van.

“I like to think of them as St. Paul. We had our own St. Pauls in the southeast, opening roads, when the roads were being built — I don’t know when they built the Turnpike, but I’m sure it’s not older than SEPI — and going to begin communities,” said Villar.

They surveyed diocesan regions in each state, following a “see, judge, act” methodology developed by Belgian Cardinal Joseph Cardijn in the 1920s and used in Catholic Social Teaching. In those early days, some bishops did not even realize they had a Hispanic population until Father Vizcaino and his team presented them with data and photographs of the neighborhoods where they lived.

Just as today, many Hispanics living within SEPI’s region remain silent or in hiding because of their legal status.

“I would say that many of them are undocumented, and that’s kind of the sad part. But at the same time, the moment we believe that those who are brave enough to cross the sea, or a border, are not a problem but a source of strength and creativity, maybe we can find ways to work together and benefit each other from what each one has,” said Villar.

In fact, she pointed out that those who most “move and shake” the Church are undocumented.

While the Hispanic ministry and SEPI help Hispanics grow in faith and formation, they have also aided English-speaking communities through numerous programs, including a language and culture immersion course that lasts three weeks during the summer.

“Nobody can learn a language in three weeks, but they can get a taste of it, and feel comfortable, and learn the culture behind the language,” said Villar.

Olga Villar (center), SEPI's executive director, talks with Ana Rodríguez-Soto (left), editor of the Florida Catholic, and Cristina Cabrera, a freelance reporter for the archdiocesan newspapers, during the recording of the archdiocesan podcasts What the Faith, Miami? and Cuéntame Católico.

To build bridges between both worlds is a constant hope, as demonstrated at the XVIII Regional Encuentro of the Southeast, which selected “Fortifying the bridges that unite us” as its theme. Held Oct. 12-15, 2022 in St. Augustine, Florida, it was also the first meeting held partly in English.

The bishops, religious and lay leaders in attendance discussed the challenges and opportunities for evangelization and formation, family life ministry, youth ministry and social justice.

“I think that everybody walked away in that first part wanting more, and going back to their dioceses seeking opportunities to have these conversations,” said Villar.

Before the regional Encuentro in St. Augustine, Villar met a young man from Biloxi, Mississippi, who was interested in attending. Despite  his work schedule, he told her he would be there.

“When I saw him at the Mass, he said, ‘I drove all night to be here. I said I would be here.’ That’s the kind of response we want of every young adult: For them to find what their voice is in our today, and give their response because who knows best their generation than they?”

Young adults in SEPI’s Pastoral Juvenil are Catholics between the ages of 18 and 35.

“We accompany and empower them so they start now and recognize what their vocation is in the Church, and they don’t wait until they have no hair on their head to respond,” said Villar.

SEPI offers different courses to help develop leaders in the Church and community, including courses for peer ministry leaders and adult advisers to youth ministry.

The Pastoral Juvenil is also responsible for creating “La Pascua Juvenil,” literally an Easter book for young people. Every year, a new team of young people from the southeastern region gathers to decide on the theme and content of the book, which must be completed by January or February of the following year, just in time for Lent.

“I get goosebumps because they take whatever topic they decide to do and they really apply it to ‘see, judge, act,’ to the reality, through the Gospel and Catholic teaching as well,” said Villar.

For Lent 2023, the theme will be “Eucharist Lived in Community.” The bilingual text will have QR codes and internet friendly links to help young people venture through chapter questions and reflections.

“I think that it’s helping them be protagonists of their own lives and their own now,” said Villar.

Some participants during the farewell party of the XVIII Regional Encuentro of the Hispanic ministry leaders from the southeastern United States, celebrated Oct. 12-15, 2022, in St. Augustine, Florida.