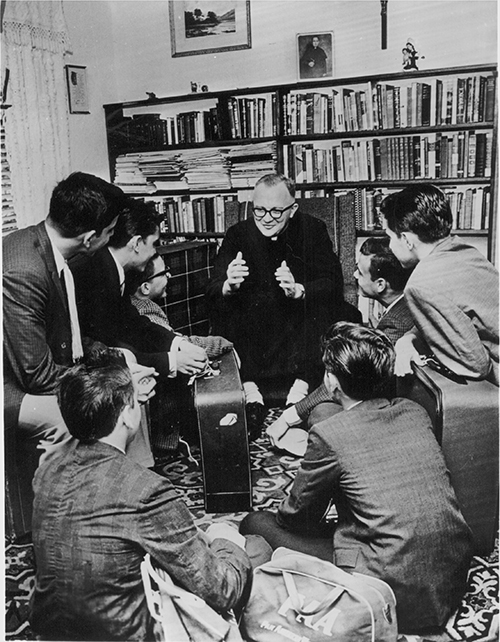 Iconic image of Msgr. Bryan Walsh speaking to some of the unaccompanied Cuban minors who came to Miami via the Pedro Pan program he directed. From 1960 to 1962, Pedro Pan brought more than 14,000 Cuban minors to the U.S. Msgr. Walsh arranged for Catholic Charities agencies throughout the U.S. to house and educate them until they could be reunited with their parents. The program has continued in the Archdiocese of Miami since then.

MIAMI | Due to an order issued by Florida Governor Ron DeSantis, some 16 facilities serving unaccompanied migrant children would have to close in the coming months, including the oldest children's shelter in the state and probably the country: the Archdiocese of Miami's Msgr. Bryan O. Walsh Children's Village, formerly known as Boystown.

On Dec. 10, 2021, Gov. DeSantis ordered the Department of Children and Families, Florida's child care regulator, to stop issuing or renewing licenses to facilities that house unaccompanied migrant minors who are waiting to be reunited with their families or sponsors in Florida.

This rule could affect the resettlement of hundreds of migrant minors in Florida. According to data from the federal government’s Office of Refugee Resettlement, during the period from October 2020 to September 2021, more than 11,000 unaccompanied minors were released to their sponsors, the highest number in the country, second only to Texas.

For now, the order will not revoke existing licenses, but it will not allow Florida shelters to house more migrant children unless the state and the federal government reach a cooperation agreement; that is, the federal government must share more information with the state about the relocation of migrants in Florida. Otherwise, the state could deny licenses when the time comes to renew them; in the case of Catholic Charities this would happen in March.

DeSantis said that with this measure he hopes to prevent the "clandestine relocation" of immigrant minors to Florida and to focus state resources on the needs of Florida's children — despite the fact that the federal government provides the funds to care for all unaccompanied minors. 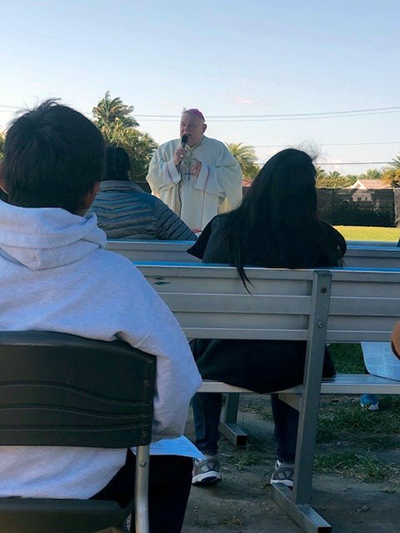 The governor has asked the Florida legislature to turn his executive order into state law. Representatives of organizations that work with minors are in Tallahassee trying to keep that from happening, and get the state to reverse the rule.

"I can’t sleep at night thinking about this sometimes," said Peter Routsis-Arroyo, CEO of Catholic Charities of the archdiocese. "Over a million children have passed through our custody" over the last 60 years without a problem.

Archbishop Thomas Wenski also has spoken out against the governor’s order.

"Gov. Ron DeSantis is trying to stop all federal programs in Florida that serve these unaccompanied kids, as well as services to Cubans (and Haitians, Venezuelans, and others) released by the U.S. under its 'parole' authority," the archbishop wrote in his January column for the archdiocesan newspapers.

He noted that Catholic Charities of the Archdiocese of Miami has been caring for thousands of unaccompanied minors for the past 60 years without interruption, since the early 1960s, when Irish-born Father Bryan O. Walsh, along with many others, did the impossible: "...resettling 14,000 minor children throughout the United States and eventually reuniting most of them with their parents."

Today's minors, "these young people — boys and girls, infants to teenagers — are coming mainly from Guatemala, Honduras, and El Salvador," the archbishop noted. But they are not unlike those Cuban children 60 years ago, who were sent alone by their parents, desperate to protect them from the communist regime that had taken hold on the island.

He mentioned the conditions in their home countries that produce successive waves of unaccompanied minors, and the unspeakable crimes committed against them as they travel from their countries of origin to the Texas border.

Another reason many minors come unaccompanied is because their parents live here "under a broken immigration system that in most cases does not allow them to obtain legal status. This is a situation that we do not encourage, but we should not punish the victims," the archbishop said.

"It's all about the children," Routsis-Arroyo said. "Our center has offered a safe and nurturing environment for the children for over 60 years. It's part of our mission, and children should come first."

What is the Unaccompanied Refugee Minors Program?

According to the federal government’s Office of Refugee Resettlement, the Unaccompanied Refugee Minors Program is a foster care program that establishes legal responsibility, under state law, to ensure that unaccompanied refugee minors and other eligible children (such as children granted asylum, special immigrant juvenile status, "T" or "U" status) receive the full range of assistance, care and services that are available to all foster children in the state.

In Florida, the centers that temporarily house these unaccompanied immigrant minors after they have crossed the border, but before they are reunited with their families or sponsors, fall under the Office of Refugee Resettlement of the U.S. Department of Health and Human Services and are funded by the federal government.

The current Unaccompanied Refugee Minors Program of Miami’s Catholic Charities has one care facility, the Msgr. Bryan Walsh Children's Village, formerly known as Boystown, which can house up to 81 minors ages zero to 17 (at the moment, it only has 50, due to COVID safety protocols).

Minors arriving after crossing the border are referred by the Office of Refugee Resettlement to organizations such as Catholic Charities until they are reunited with a family member or a safe sponsor.

"The program gives them a safe place to live while they process reunification with a family member or sponsor," said Jackie Carrion, senior director of Community Based Services for Catholic Charities of the archdiocese.

At the shelter, minors receive medical care, counseling, religious, recreational, vocational, cultural, legal and educational services, Carrion said. She added that "these children receive high quality care. We don't understand the reason why they don't want these programs to be licensed." Catholic Charities' license will expire in March.

Carrion explained that children come to Florida for different reasons: because they have a family member in the state; because the system considers that it is the best place for the child; or because the program has the capacity to receive that child.

The reunification process with the family or sponsor is faster when they are here in the state of Florida, and it gives family members the opportunity to visit the children who are in the program, which helps their mental and emotional health.

The Miami program is the only Catholic unaccompanied minors care program in Florida, Carrion said. "There are similar programs to ours in other parts of Florida, but they are not Catholic.”

Under the governor's order, "we don't know the repercussions it will have on the lives of many minors and employees," said Carrion, who has been with Catholic Charities for 26 years. "I have absolute confidence in the services that are being offered here. I see the help being given to the community and the people, and I like being a part of that."