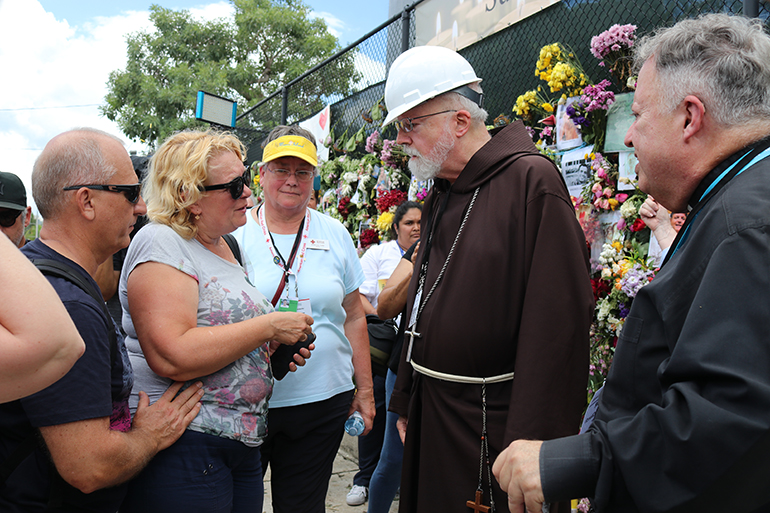 Boston Cardinal Sean Patrick O’Malley speaks with the mother of Anastacia Gramova, one of those missing in the collapse of the Champlain Towers South condominium in Surfside, during a July 2, 2021 visit to the memorial wall located near the collapse site. At center is Martha Lohrstorfer, a volunteer counselor with the Red Cross. 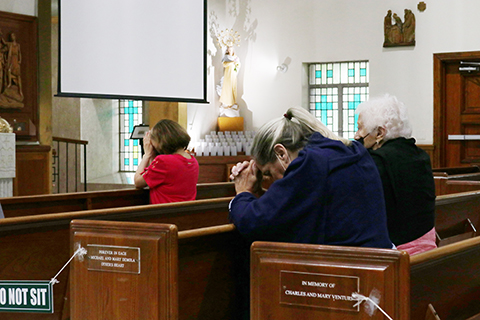 Faithful pray for the victims of the building collapse and their families during a Mass June 30, 2021 at St. Joseph Church, Miami Beach, the closest parish to the Champlain Towers South condo.

SURFSIDE | More than two weeks after the partial collapse of the Champlain Towers South condominium in Surfside, north of Miami Beach, parishioners from St. Joseph Church, located two blocks from the site, continue to feel sad about what happened. And they keep praying.

According to the first reports from authorities, the collapse of the condo on June 24, 2021, left more than 150 people missing, and 35 rescued. As of July 9, the numbers were 60 confirmed deaths and 80 people unaccounted for.

“I feel sad and am in constant prayer for those families,” said Yolanda Garay, referring to the 10 families registered in the parish who lived in the collapsed building. (Update: All the members of those families had been confirmed dead as of July 19.)

Garay knows most of those parishioners by name. Due to the health measures in place for COVID-19, she welcomes the faithful at the door of the church prior to Mass, making sure they wear face masks and disinfect their hands before entering.

“My heart breaks because I knew them and every time they came to Mass I greeted them; and now, as days pass by, we realize that more people are missing,” said Garay, pointing out that some families did not register every member at the parish.

On the morning of June 30, Garay said she heard the news that they had found the body of parishioner Hilda Noriega, the mother of the police chief of nearby North Bay Village. “And they found her with the holy rosary in her hand.”

“We are in constant prayer for these families because it is not easy to lose a family member, especially under these circumstances. And not knowing if they are alive or not is heartbreaking,” Garay said. 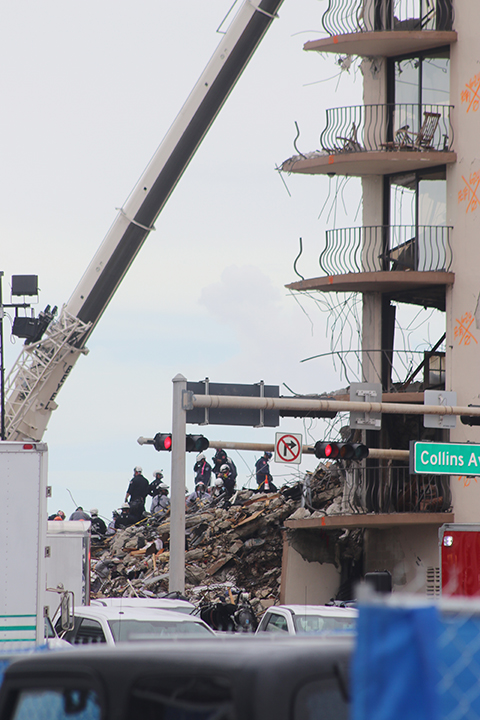 Search and rescue teams look for survivors among the rubble of the partially collapsed Champlain Towers South condominium in Surfside, June 30, 2021. A few days later, on July 4, the part of the building that remained standing was demolished by the authorities to speed up the search and rescue process. 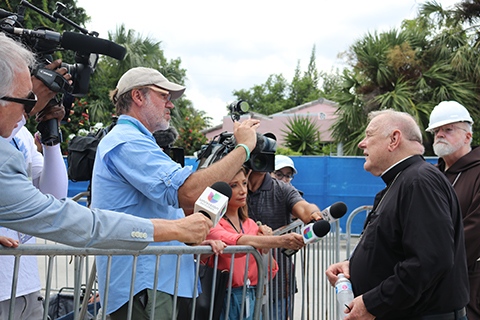 Archbishop Thomas Wenski speaks to the press July 2, 2021, after visiting the site of the partially collapsed Champlain Towers South in Surfside. He was accompanied on the visit, at right, by Boston Cardinal Sean Patrick O'Malley. 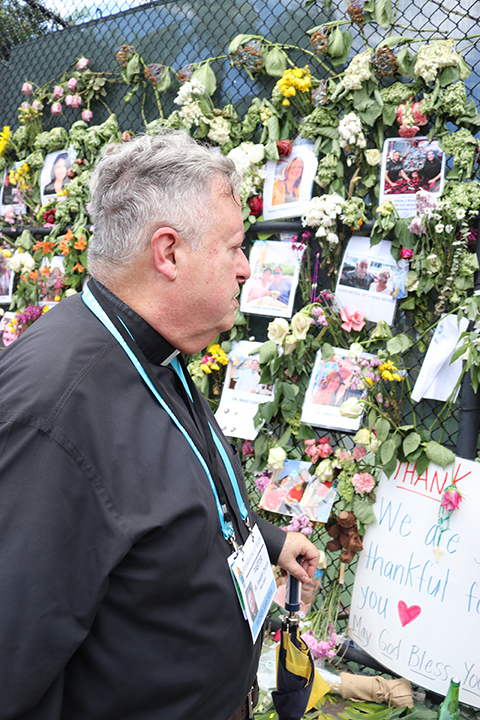 Father Juan Sosa, pastor of St. Joseph Church, Miami Beach, pays a visit July 2, 2021 to the memorial wall for the victims of the Champlain Towers South collapse in Surfside, a number of whom were members of his parish.

The parish has created a Book of Prayer for Surfside, where parishioners and guests have written the names of the people they know are missing. They are prayed for at all of the church’s Masses and liturgies, as well as by all the parish groups and ministries.

When the body of a missing family member is found, “we give them a hug to strengthen them, and so that they also know that they are not alone, that their family at St. Joseph is always with them in our hearts and in our prayers,” said Garay.

What happened to the individuals trapped in the collapsed building “is very difficult, that is why we need to pray a lot for them. We have to pray to God for all of them, it doesn’t matter who they are, we are all the same: humans,” said Muna Meckel, another parishioner, adding “you don’t just pray at Mass, but everywhere.”

And that is what various archdiocesan priests, chaplains, and deacons have done since the building collapsed. They have offered spiritual support to families, rescue workers, and even the media. They spend the day at the family reunification site, and at the memorial for the victims which has arisen close to the collapse site: a mural filled with flowers and pictures of the missing.

“My role is to comfort everyone. All the families that are here. Let them talk and bring some comfort to them, and pray,” said Deacon Thomas Hanlon, chaplain of the Miami-Dade Police Department, who has been on location since the first day.

Father Matthew Gomez, director of the archdiocesan Office of Vocations, said that he was able to console and comfort members of the press. “We don’t think that they need ministerial support, but they have been here since the first day, with rain, sun, thunder and lightning. That emotional and physical stress has also affected them.”

Priests also are present at the rubble — such as Father Christopher Marino, rector ofSt. Mary Cathedral and chaplain to the City of Miami Fire Rescue — who has been offering spiritual accompaniment and consolation to the search and rescue teams who have the difficult job of searching the debris for signs of life, as well as recovering the bodies of the dead.

Since the building collapsed, Father Juan Sosa, pastor of St. Joseph, has visited the area around the site of the tragedy many times, and he has given numerous interviews to the media. In a reflection penned June 29, he said the answer to coping with this “experience” — the unexpected collapse of a building in the middle of the night where parishioners resided — arises from the same tragedy that finally touches all of those who hear the news and see the rubble. “You must be present and available, hopeful that God will restore what is broken and will bring peace to those who wait for news of their relatives and friends.”

He asked the community for prayers and gratitude for the signs of life amid the anguish and pain; for the difficult and ongoing work of the rescue workers; the constant willingness of people to share what they can with those who lost their homes; the consolation of counselors and chaplains; the commitment of young people to be ambassadors of good news in the midst of bad news.

Archbishop Thomas Wenski and Boston Cardinal Seán O'Malley also visited the area July 2. They met with members of the search and rescue teams, visited the site of the collapse, and prayed for the families of the missing at the memorial wall.

The tragedy at Surfside has touched many people, not just in South Florida but beyond, due to the diversity of those who resided at Champlain Towers South, Archbishop Wenski noted. Among the dead and missing are Jews and Catholics from Latin America and South Florida, Russia and Southeast Asia, young families, retirees and tourists.

“There is much darkness for the loss of life, but faith is like a ray of light,” the archbishop told the media after his visit. He added that representatives from Catholic Charities and Catholic Health Services are offering counseling and helping with housing as well as other physical, psychological and spiritual needs.

“We are all very moved by the human suffering we have experienced here. But at the same time, we see how the best part of humanity comes out in these circumstances, the generosity, the grit, and the courage of the people who want to help and even put their lives at risk to help their neighbors,” said Cardinal O’Malley after the visit.

Father Juan Rumin Dominguez, parochial vicar at St. Joseph who also visited the site with Archbishop Wenski, said he was “very impressed to see these people who, day and night, are risking their own lives to rescue the lives of others. It is a great example from the point of view of faith as well. All of those rescue workers from the United States, from different states, from Israel and Mexico, are a great example.”

While some families still hoped to find their loved ones alive, others began to say goodbye. On July 6, the first funeral Masses were celebrated: at St. Joseph for the Guara family — father Marcus Guara, his wife Anaely Rodriguez, and their daughters Lucia, 11, and Emma, 4; and at St. Patrick Church in Miami Beach for Hilda Noriega.

At 10:30 p.m. on July 4, the part of Champlain Towers South that remained standing, and had been evacuated when the collapse occurred, was demolished. Authorities said this was necessary to ensure the safety of the search and rescue teams and expand the search range, especially in the area closest to the upright but unsafe building.

As of July 17, authorities announced that 95 victims had been recovered out of 97 who had been reported missing.

This article appeared in the July 2021 print edition of the Florida Catholic, which went to press July 9. The number of dead and missing was updated when it was published online. 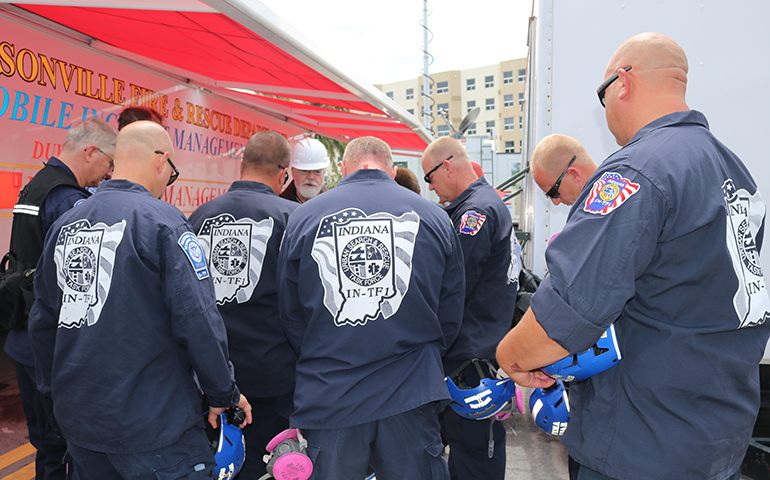 Boston Cardinal Sean Patrick O’Malley prays with members of an Indiana search and rescue team during a July 2, 2021 visit to the site of the partially collapsed Champlain Towers South condominium.