'I want you to want to be my brother'

Black Catholics reflect on 'lights and shadows' of their history, enduring racism and steadfast faith 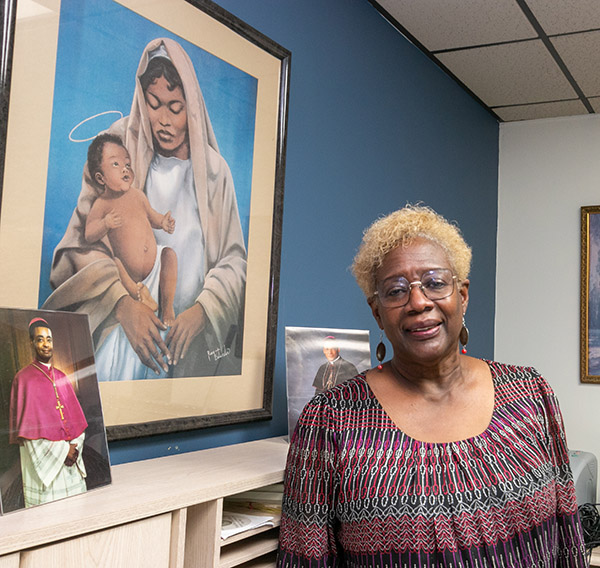 Katrenia Reeves-Jackman, director of the archdiocesan Office of Black Catholic Ministry, poses in front of a painting of a black Madonna and child. The picture at left is of a very young bishop, now Cardinal-elect Wilton Gregory of Washington, D.C., the first African-American to be elevated to that rank.

MIAMI | A long time ago, in a nation far, far away: That's how lots of white people tend to view racism.

But it wasn't that long ago for Donald Edwards, associate superintendent of Schools for the Archdiocese of Miami. In 1982, after getting hired as principal at St. Michael School in Memphis, he requested his personnel file from his previous employer, St. Ann School in Bartlett, Tennessee, both in the Diocese of Memphis.

That's when he saw the note St. Ann's principal, a Sister of Charity of Nazareth, Kentucky, had written on his application after interviewing him: "Black but refined."

"I tore it up, I was so angry," Edwards recalled.

He had been hired at St. Ann in 1978, a school with an all-white enrollment. "I was told after I started there that some families left the school when I started," Edwards said. 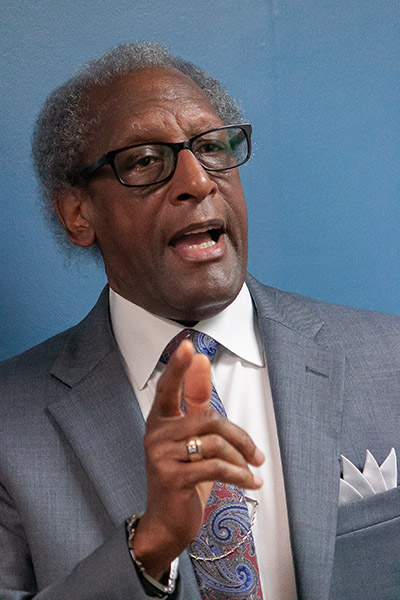 Donald Edwards, associate superintendent of schools for the Archdiocese of Miami, shared his fairly recent experiences with racism on the archdiocese's What the Faith, Miami? podcast, which focused on Black Catholic History Month.

Yet, said Edwards, "she ushered me into the principalship, and nurtured me and loved me and groomed me. But she was just subject to her own bigotry in that instance. She was a lady that I greatly admired."

Those are the "lights and shadows" of the African American experience that Archbishop Thomas Wenski referred to when he marked the start of Black Catholic History Month in the archdiocese. The Mass took place Nov. 8, 2020 at St. Augustine Church and Catholic Student Center in Coral Gables.

"To speak of the experience of African Americans in the Catholic Church brings us, of course, to the point of Black Catholic History Month," the archbishop noted. It is a history "with many bright lights" as well as "too many dark shadows."

Among them the fact that, as recently as 60 years ago, Black Catholics had to sit in the back pews at Gesu Church in downtown Miami and wait until the white people received Communion before doing so themselves.

"Sometimes they had to go after Mass downstairs to the basement in order to receive Communion. That was the norm," said Katrenia Reeves-Jackman, director of the archdiocesan Office of Black Catholic Ministry.

She, too, speaks from personal experience: that of her parents. Yet Reeves-Jackman, Miami-born and Overtown-raised, attended Catholic schools all her life: Holy Redeemer (now closed) in Liberty City and Msgr. Edward Pace High in Miami Gardens.

"It was not until I was in the sixth grade that I ever even saw a black religious or a black nun," Reeves-Jackman remembered.

BACK TO THE APOSTLES

Black Catholic History Month, celebrated every November in the U.S., seeks to celebrate and talk about the contributions of Black Catholics to the Church.

As Reeves-Jackman pointed out, "Black Catholics begin way back with the Acts of the Apostles. We've been around for a while. We've had black popes. We have black saints," including six African Americans currently embarked on the journey to sainthood. 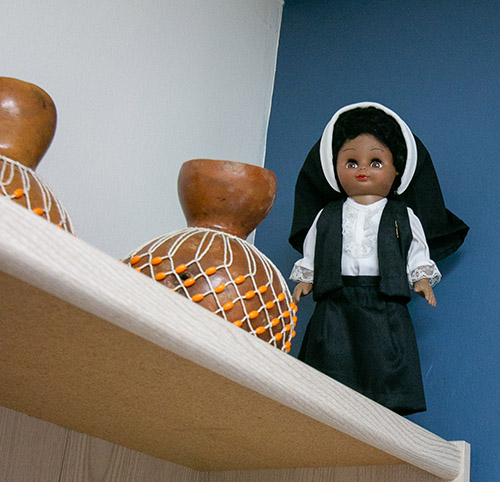 A doll of an Oblate Sister of Divine Providence adorns the office of Katrenia Reeves-Jackman, director of the archdiocesan Office of Black Catholic Ministry. Mother Mary Lange, who founded the order, is on the road to canonization. The Oblates were the first religious community for women of African descent.

But Black Catholics are a minority within a minority, accounting for about 3 million of the more than 70 million U.S. Catholics, and less than 1% of the 1.5 million Catholics in the Archdiocese of Miami.

Only two designated African American parishes remain in South Florida: St. Philip Neri in Miami Gardens and Holy Redeemer in Liberty City. Two others closed in 2009: St. George in Fort Lauderdale merged with Our Lady Queen of Martyrs; and St. Francis Xavier in Overtown, founded in 1927 by Black Catholics looking for a more welcoming experience, merged back into nearby Gesu.

Black Catholics are "everyone under the African diaspora," said Reeves-Jackman. "You know how we originally came. We were on those slave ships. And as those ships made their way through the Middle Passage and all up and down the seas and the oceans and through the rivers, slaves were either thrown off, jumped off, or put off so they could be sold."

As with segregation, the Catholic Church was not immune to the norms of the era. "Everybody agrees that it is the original sin of the Church, because the Church was also involved with being slave owners and dealing with those times," said Reeves-Jackman. 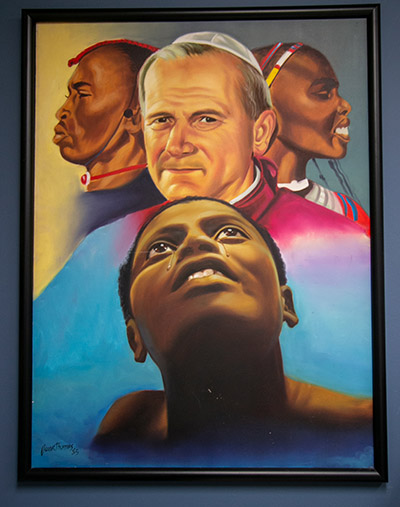 The Church's first condemnation of the slave trade comes in 1839, in Pope Gregory XVI's apostolic letter, "In Supremo Apostolatus." A decade earlier in Baltimore, Mother Mary Lange – born in Cuba to Haitian parents and one of the six African Americans in the process of canonization – co-founded the Oblate Sisters of Providence in Baltimore, the first religious community for Black women; three years later, a second community, the Sisters of the Holy Family, is founded in New Orleans by another candidate for sainthood, Henriette DeLille.

In 1958, the U.S. bishops denounced racism for the first time. They published their first pastoral letter on the subject, "Brothers and Sisters to Us," in 1979, and followed that in 2018 with "Open Wide Our Hearts."

"There are children who've never seen a picture of a black saint, maybe haven't even seen a black priest," she added. "We need to be educated. We need to learn about each other."

She compared the archdiocese to a salad: "And really, it's a lot of lettuce. But who wants to eat a salad that's just lettuce? So think about all of the different cultures that you have here. We are the tomatoes, and the bacon and the green peppers. By the time you add all the Hispanics, and our Haitian brothers and sisters, our African brothers and sisters, if you just put all of this stuff in that salad, in the end you have the greatest salad that you could ever have."

Jeanette Tullis - 11/20/2020 02:18 PM
Thanks to the Archdiocese for addressing the issue of racism in the Catholic church during Black Catholic History Month. This is an issue that should be recurring, not only when it's placed on the calendar. Racism will only subside when mothers make a decision to raise their children in an atmosphere of "receiving people that don't look like them" with respect. If a child is raised to discriminate or prejudge, racism is continue to be a part of our society.

Valli Leone - 11/19/2020 11:28 AM
Thanks so much, Katrenia, Donald and all writers and contributors to this very beautiful article, much needed for such a time as this in our church and community. Your experience and your insight blessed me tremendously. Please accept my heartfelt regret for any racism or bigotry that has been inflicted upon our Black brothers and sisters, that which has been allowed to penetrate into your hearts and souls due to our self-centered ignorance through the years. Blind racism is the toxic water that we all swim in from time to time. We know that America will not be beautiful until it is beautiful for everyone. Jesus never fails! Please keep up the prayers, the good works and trusting in the Lord with all of your hearts to teach, educate and love us in the midst of this pain. I thank God for this past year and for the light that has been shed on this problem. We know that blame is often a convenient hiding place but that we live to promote a world with empathy, understanding, forgiveness and for true joy. By the blood of Jesus Christ, I decree and declare that routine, unconscious bias must end and that every demonic force from where it comes must go directly to Jesus Christ to be destroyed by the power of his Cross and Resurrection. Alleluia! Again, thanks so much for your valuable contribution to this necessary work. Jesus loves you, and so do I! ðâ¤ï¸ð