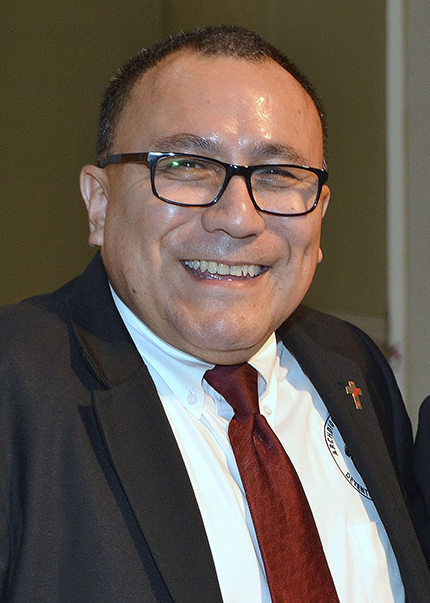 Deacon Edgardo Farias has directed the archdiocesan Detention Ministry since 2006.

MIAMI | Despite the closure of Florida's detention centers and prisons due to the coronavirus pandemic, the Archdiocese of Miami's Detention Ministry continues to provide spiritual assistance to the incarcerated and imprisoned.

Since last March, detention centers and prisons have discontinued visits by family members and visitors from outside the prison facilities, such as volunteers working with detainees, as well as priests and religious.

In addition, all religious services and activities have been suspended until further notice.

"But spiritual support is still coming," said Deacon Edgardo Farías, director of the archdiocesan Prison Ministry. He noted the ministry continues to accompany inmates "by providing Bibles, rosaries, devotionals and religious cards, which the chaplains distribute to those who request them."

The ministry also reaches them 24 hours a day through Radio Paz 830 AM, the radio station of the Archdiocese of Miami. Inmates can listen to daily Mass, the rosary, the liturgy of the hours, the Chaplet of Divine Mercy and a variety of programs.

One such program is Fe y Esperanza (Faith and Hope), a one-hour broadcast in Spanish from the Detention Ministry, which Deacon Farías has produced and directed for 15 years. Since the closure forced by the pandemic, the program has been divided into two parts: a half hour in Spanish and a half hour in English, both dedicated to reflecting on the Sunday Gospel.

Detention ministry teams from St. Bonaventure and St. Katharine Drexel parishes in Broward County, and Our Lady of Guadalupe parish in Miami, host the program. Deacon Farías hosts the program once a month.

The program reaches inmates in federal and state prisons and Miami-Dade Correctional facilities, where inmates are allowed to have a small radio. County jails do not allow it.

"We don't stop being in contact with them (the incarcerated), but unfortunately we can't do much," lamented the deacon. "This is an opportunity for the Church to be heard more, not only in the prisons but everywhere."

NEW WAYS TO REACH OUT

Deacon Farías is looking for new ways to reach out to the incarcerated. He is creating a podcast in English and Spanish, each one 10 minutes long, with reflections on the Sunday Gospel and faith formation programs, which he wants to broadcast on Radio Paz.

He originally planned to broadcast the programs through low-cost, electronic tablets that provide no access to the internet. The tablets are provided by the Jpay company under a contract with the Florida Department of Corrections.

These tablets would be distributed free to inmates, apparently at no cost to them or the taxpayers. But they charge users very high prices for sending or receiving e-mails, downloading music, listening to the radio, participating in videoconferences, transferring money, and downloading games, among other options.

Some correctional chaplains planned to distribute the Spanish language televised Mass on these electronic tablets, but realized it would represent a very high expense for the Church. Therefore, the radio is the best option. "With Radio Peace we reach the inmates for free. They don't have to buy anything but the radio and listen to it," said Deacon Farías.

However, the work of the archdiocesan Detention Ministry has not changed. It provides pastoral care to about 20,000 people deprived of their liberty in 30 detention centers and prisons, including federal prisons, state and county jails, juvenile care centers and immigration centers located in Broward, Miami-Dade and Monroe counties.

Prior to the pandemic, about 150 regular volunteers, 7 deacons, and 15 priests were involved in ministry, including Archbishop Thomas Wenski of Miami, who celebrates Mass on Christmas Day at the Krome Immigration Detention Center in southwest Miami.

A group of Emmaus brothers and another group of Cursillistas offered occasional retreats in state prisons. These volunteers come from different parishes such as St. Andrew, St. Bonaventure and St. Katharine Drexel in Broward and Our Lady of Guadalupe, Mother of Christ and Our Lady of Lourdes in Miami-Dade.

PRISON SITUATION DURING THE PANDEMIC

With the closure of South Florida's jails and prisons, chaplains in these institutions have seen their work doubled. The pandemic has caused stress and depression to the inmates and their families, who have to face illness, death or other crises, according to a report that Deacon Farías prepared for the Dicastery for Promoting Integral Human Development, recently created by Pope Francis, to which the deacon belongs.

The report also points out that inmates have not attended religious services since the beginning of the pandemic. Chaplains are only able to provide spiritual counseling for a short time in an open space in the prison chapel to inmates who request it. At the Federal Detention Center in Miami, Communion is distributed in their cells to Catholic inmates who ask for it.

One Broward detention center is allowing video visits. Family members go to the detention center but can only be seen by video. "That's serious because they are losing physical contact and the danger is that this ends up becoming the new normal," warned the deacon.

In its February-April 2020 report, “COVID-19 in Correctional and Detention Facilities - United States,” the Centers for Disease Control and Prevention (CDC) noted that correctional and detention centers face challenges in controlling the spread of infectious diseases due to shared and crowded environments.

Information from state representatives indicates that the number of infections within detention centers and prisons is much higher than reported. As of September 7, Immigration and Customs Enforcement (ICE) reported a single death from COVID-19 within its South Florida detention facilities, and 482 positive cases among inmates since testing began in February 2020.

State Representative Debbie Mucarsel-Powell has noted that since June 2020, the number of infections in ICE facilities has doubled and it is not known exactly how many detainees have lost their lives during the pandemic. Mucarsel-Powell shared her statements on August 26 in a conversation via Zoom organized by the Florida Immigrant Coalition and other advocacy organizations where other Florida representatives and family members of detainees in immigration centers participated.

"We know that Krome doesn't use the proper social distance and they don't have the proper disinfectant equipment," she said.

Mucarsel-Powell also noted that she has heard reports of detainees who died in hospitals shortly after leaving detention centers. "We don't know other details, like how long they were experiencing symptoms, and whether they ever received any medical care."

Both Mucarsel-Powell and Congresswoman Donna Shalala said they have been asking ICE detention centers for explanations, but have received no answers.

Working with prisoners is "a difficult and tough situation given that nobody wants to go with them because they committed crimes, but they are human beings," noted Deacon Farías.

He explained that the work of the ministry is pastoral and not social, but at St. Dimas House, located within Corpus Christi Parish in Miami, he helps ex-convicts find social agencies and shelters when they leave prison.