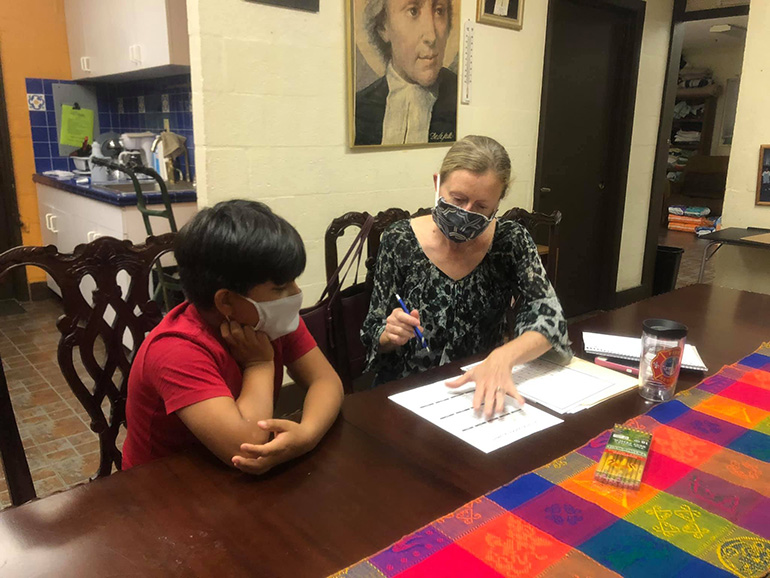 La Salle Educational Center reading specialist Brenda Blanton guides a student with his homework. Blanton was originally hired to help with the "summer slide," a term referring to the summer months when academic skills are sometimes forgotten by students. When COVID-19 shifted schools and homework online, Blanton helped students adjust and keep up with changes.

HOMESTEAD | Although the COVID-19 pandemic forced the La Salle Educational Center to close its doors in March, the shutdown did not end its service to families living at the South Dade Labor Camp, where the center is located.

Relying on donations and a few volunteers, the center fed local families, distributed diapers for babies and toddlers, and provided facemasks for households. The center's staff also tutored students and even hosted a summer camp for kids. (See accompanying story.)

The South Dade Labor Camp has 300 units that house adults, families with children, and an elderly population. Staff at the La Salle Center discovered one of the largest problem’s residents faced during the pandemic was accessing food from distribution locations. 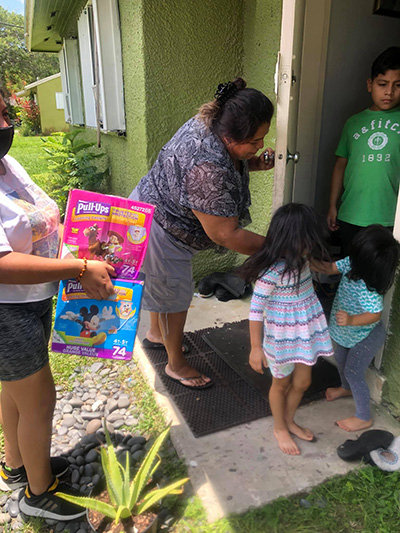 Diapers were delivered by La Salle Educational Center volunteers to families with small children at the South Dade Labor Camp as a way of helping during the COVID-19 pandemic. Many of the diapers were donated by Belen Jesuit Preparatory School.

“Parents were going to work. They weren’t able to stand in line and miss work, and many of them didn’t have transportation to be able to do it,” said Monica Lauzurique, the center's director.

Miami Dade County Public Schools' Migrant Education Program provided breakfast and lunch to students from March 16-20, 2020. After that, meal distributions moved to public schools and other locations outside of the camp.

Prior to COVID-19, the La Salle Center fed an average of 100 families monthly from their pantry. During the pandemic, they expanded their reach, acquiring food for all 300 residential units and distributing it door to door on a weekly basis.

Using a rented U-Haul, the center's staff picked up directly from Farm Share, a local supplier that regularly provides La Salle and other food pantries in South Florida with donations of fresh fruits and vegetables, canned goods, and proteins such as chicken, pork, cheese, yogurt, and more. Over 100 boxes of baby diapers and wipes were also donated by Belen Jesuit Preparatory School.

With no students in the center's classrooms, the La Salle team used the space to sort items and prepare bags for delivery.

“I think there was a lot of surprise that food was coming to them,” said Lauzurique. “But they were worried even about the safety of where stuff was coming from, which was kind of interesting — when you’re desperate for something, but you also want to make sure that it is safe for your family.” 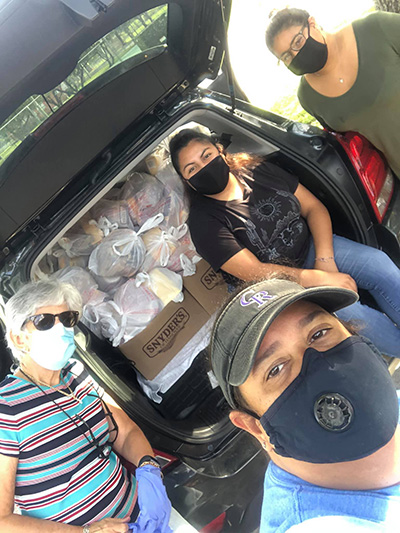 With face masks on and a trunk full of food, La Salle Educational Center team Silvia Munoz, Monica Lauzurique, Dulce Olivera, and Yancy Velasquez pose for a selfie before distributing food donations door to door in the South Dade Labor Camp, where 300 units are the homes of adults, families with children and elderly.

The La Salle team wore facemasks when they made their deliveries, although at that point in the outbreak, mask wearing was not mandated. The team agreed to wear masks to keep themselves, and the people they visited, safe. Most camp residents have little or no access to medical care due to their income and immigration status.

“It’s not something people talk about. Their normal situations are stressful as is, and with the uncertainties of COVID, there are additional stressors,” said Lauzurique.

When they realized that residents also would need masks, the La Salle team asked for donations through social media. Lasallian Christian Brothers schools from New Jersey and Oklahoma sent masks, as did the Little Lighthouse Foundation, a Miami nonprofit that assists underserved children and their families. Many local friends of the La Salle Educational Center also sewed masks and donated them.

“I’m beyond thankful for them because they have gone above and beyond,” said Lauzurique.

On May 5, 2020, the La Salle Center re-opened with a limited after-school tutoring program, allowing those previously enrolled to return for one-hour, one-on-one tutoring sessions. Social distancing was enforced, as were sanitary and disinfection measures plus the wearing of masks — a first for many students.

The staff at La Salle was curious to see what students had been doing at home since Miami Dade County Public Schools moved to virtual learning in mid-March. The center had recently hired reading specialist Brenda Blanton to help during the regular academic year as well as the “summer slide,” a phrase referring to the academic and achievement gains made during the previous school year that are lost during summer vacation. Blanton helped to asses where the students were academically and provide one-on-one tutoring.

The La Salle team found that some students had kept up with assignments, while others had not done anything in over a month.

“That’s difficult for a student that might not be using the best laptop, has very spotty internet, or doesn’t have the structure at home for someone to say, 'Hey, it’s time to sit down and get this done,'” Lauzurique said.

She noted that most of the children's parents continued working during the shutdowns because they have agricultural or construction jobs. “That is a job you cannot do from home,” she said. 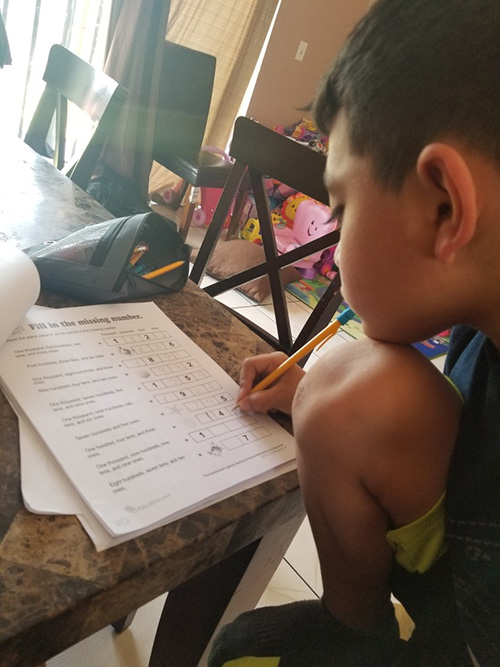 La Salle Educational Center student Kevin Silva keeps up with his virtual schoolwork back in April, in this photo taken by his mother, Reina Ramirez Silva, which the center posted on its Instagram account. With the COVID-19 pandemic, all schools finished the 2019-2020 academic year online. La Salle's team checked in on a weekly basis with children who attended the center.

Parents and guardians who are home often can't help the children with schoolwork because they don't speak English and are not skilled with computers. Some adults face the challenge of their own illiteracy.

For the remainder of the school year, she checked in weekly with students and their families via phone calls and Class Dojo, a communication app with a simple interface created for teachers, students and parents. She also visited families in-person if they did not respond.

With the uncertainties surrounding the start of the 2020-2021 academic year, the La Salle staff are looking for ways to continue helping the labor camp's students and families. Thanks to a grant they applied for and extra funding they received from the Lasallian Christian Brothers District of Eastern North America, La Salle will be able to provide a full day of "virtual learning support" for the children of the community, at least through October. That means the children will be able to take their virtual classes at the center rather than at home, from 8 a.m. to 5 p.m. on school days.

“Right now, we’re looking at it from August to January. This is going to be a long-haul,” Lauzurique said.

Update and correction: After publication, this article was edited to correct the name of the Lasallian Christian Brothers district that provided funding to the La Salle Center; and updated to reflect additional funding that will enable it to provide "virtual learning support" for at least the first few weeks of the school year.